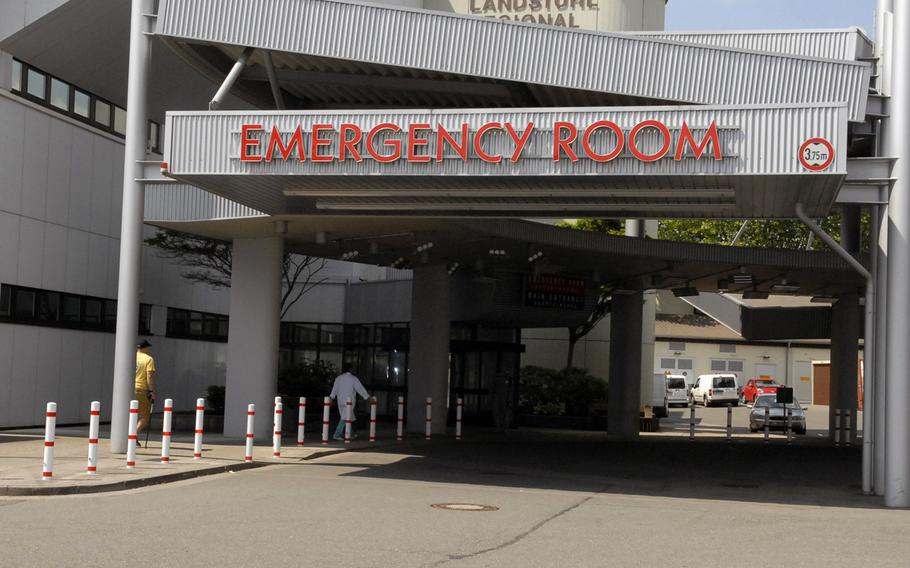 Buy Photo
After a two-week delay, Landstuhl Regional Medical Center will become a tobacco-free medical center starting Monday, Feb. 15, 2016. Under the policy, U.S. civilian employees will be able to smoke on unpaid lunch breaks in designated smoking areas or off-post, an adjustment to the original policy. (Jennifer H. Svan/Stars and Stripes)

KAISERSLAUTERN, Germany — Landstuhl Regional Medical Center will go tobacco-free starting Monday, but U.S. civilian employees will be allowed to smoke on unpaid lunch breaks in designated areas away from the campus.

Implementation of the tobacco ban was delayed for two weeks after some employees questioned the legality of banning U.S. civilian healthcare workers from using tobacco during the duty day, particularly while on lunch breaks off-post.

Hospital officials said those concerns were forwarded for review to U.S. Amy Medical Command, which had approved the original guidance.

The policy was adjusted as a result of that review, LRMC spokesman Chuck Roberts said Friday.

As the policy stands, starting Monday, "U.S. civilians will be able to use tobacco products only during unpaid meal periods in designated areas within the duty day," Roberts said. "Tobacco product use during other breaks throughout the duty day is prohibited for U.S. civilian healthcare workers."

LRMC officials announced last month that the hospital would go "tobacco-free." The plan bans the use of any tobacco products or electronic nicotine devices on hospital grounds. The policy applies to all personnel assigned to U.S. Army Medical Command, including U.S. military members, civilians, and contractors, as well as patients and hospital visitors.

The policy extends tobacco-free zones from the current 50 feet from any building to the entire medical campus. Designated smoking areas will be moved a few minutes’ walk from current smoking areas outside the hospital’s green perimeter fence.

Military personnel under the policy are not allowed to smoke or use other tobacco products at all while in uniform during their duty day. Local national employees are not governed by the policy, hospital officials said, but are highly encouraged to decrease their tobacco use during the work day.

The policy is expected to be expanded this spring to other medical facilities in Europe, including Army health, veterinary and dental clinics, as well as Army Public Health Command Europe.

The move is part of a larger effort to support Army Surgeon General initiatives aimed at promoting the health of military personnel, family members, retirees and employees on medical campuses, while protecting patients from the effects of tobacco use.

Stephanie Clark, a system administrator with Regional Health Command Europe at Sembach, Germany, said she thinks all employees should be allowed to smoke in designated areas during paid breaks.

Clark, a smoker who says she has tried to quit numerous times, spoke out at a town hall last month at the hospital. She said she was opposed to being told she couldn’t smoke on her unpaid lunch breaks, regardless of location.

She said Friday that she’s happy to hear officials have loosened the restriction on civilians.And while she understands the command’s wish to steer their military members away from a tobacco addition, she thinks the measures being taken "are too quick, drastic and unrealistic to expect from a person with an addiction." A more gradual implementation of the policy would have been better, she said.

But a growing number of U.S. civilian and military hospitals are adopting similar "no smoking" policies.