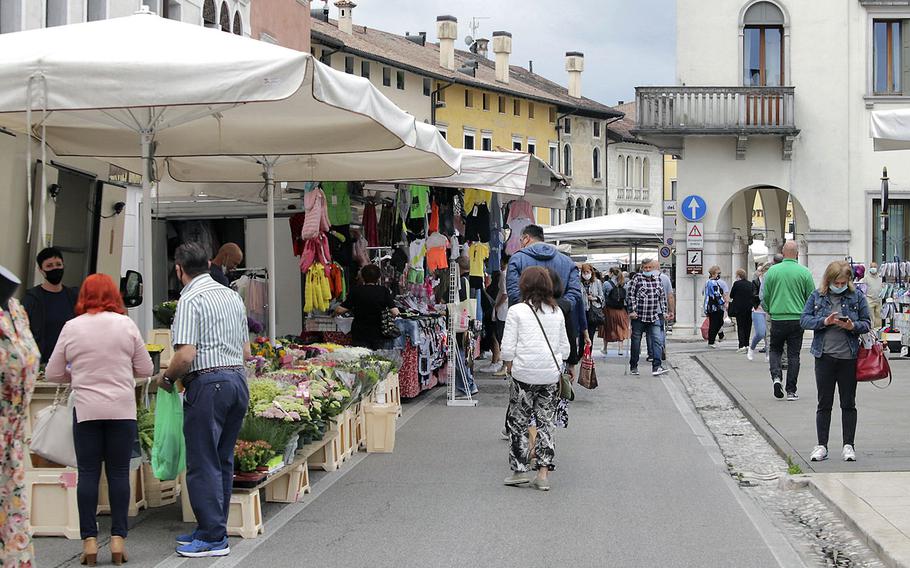 Buy Photo
Shoppers do business at an open-air market in the town of Sacile, Italy, about 9 miles from Aviano Air Base. The region that includes Aviano is among a dozen containing about two thirds of Italy's population that will be considered red zones Monday as the country's battle with the coronavirus intensifies. (Norman Llamas/Stars and Stripes)

Buy Photo
Shoppers do business at an open-air market in the town of Sacile, Italy, about 9 miles from Aviano Air Base. The region that includes Aviano is among a dozen containing about two thirds of Italy's population that will be considered red zones Monday as the country's battle with the coronavirus intensifies. (Norman Llamas/Stars and Stripes) Buy Photo
A woman walks near the Palazzo Chiericati Vicenza's municipal art museum. The region that includes Vicenza's U.S. Army Garrison Italy will be declared a red zone Monday by the national government, which would mandate tougher coronavirus restrictions. (Nancy Montgomery/Stars and Stripes)

AVIANO AIR BASE, Italy — Italy has toughened up coronavirus restrictions as infections rise around the country, including in most areas with U.S. military communities, as the more contagious British variant of the virus spreads rapidly.

Starting Monday, 10 regions and two autonomous provinces have been designated as red zones, the highest level of health alert, the government said. The rest are designated orange, with only the island of Sardinia remaining a low-risk white zone.

In a sign of the worsening situation, Aviano Elementary School, which has had students learning in classrooms since the school year began Aug. 24, will be going remote, Principal Andrew Gann said in an email to parents Sunday. Many students were sent home with extra materials on Friday in preparation for the change. Middle and high school students on Aviano Air Base had already been learning remotely.

Gann said the school is following guidelines issued by Italy and the Friuli-Venezia Giulia region. Teachers will take Monday and Tuesday to prepare for the transition and lessons will begin Wednesday. Remote-learning will last until at least March 24, the last day of instruction before spring break. School - of some sort - will resume April 5.

It was not clear Sunday whether Department of Defense Education Activity schools on Caserma Ederle in Vicenza, Naval Support Activity Naples and Naval Air Station Sigonella will keep classrooms open or go remote.

Veneto and Campania are both designated red regions - where all Italian schools will close - but Sicily will be in the less-restrictive orange designation.

Messages sent to parents of students at schools serving NSA Naples have said that “regardless of any regional color change, DODEA schools plan to be open as usual.”

A red designation bars people from leaving home except for work, in-person education, health reasons or buying necessities, according to a Facebook post from the base at Aviano. Paperwork validating those reasons must be carried. Restaurants are limited to carry out or deliveries. Most retailers not selling food, gasoline or medical supplies will be closed. Fitness facilities will also be closed, though individual exercise near home is permitted.

The Italian prime minister said the added restrictions are necessary as both infections and hospitalizations rise. Restrictions will remain in place for at least 15 days.

“Unfortunately, one year after the start of the emergency, there is a new wave of contagion,” Mario Draghi said Friday as he visited a COVID-19 vaccination center near Rome.

More than 150,000 new infections have been reported in Italy in the past week, compared to 131,000 the previous week, he said. “These figures mean we must adopt the utmost caution to limit the number of deaths and stop health facilities being saturated.”

More than half of new coronavirus cases in Italy are caused by the highly transmissible British strain of the virus, data from the national health ministry show. A study published this week in the British Medical Journal found the British variant is around 64% more likely than the original strain to cause death.

Media reports have said the government is considering several other options to try to curb the spread of the virus, which hit the country hard in the first wave a year ago. Among them are weekend lockdowns, earlier starts to overnight curfews, and, the most extreme, a nationwide lockdown for three to four weeks, which could include the Easter holiday, reports said.llamas.norman@stripes.com Twitter: @normanllamas