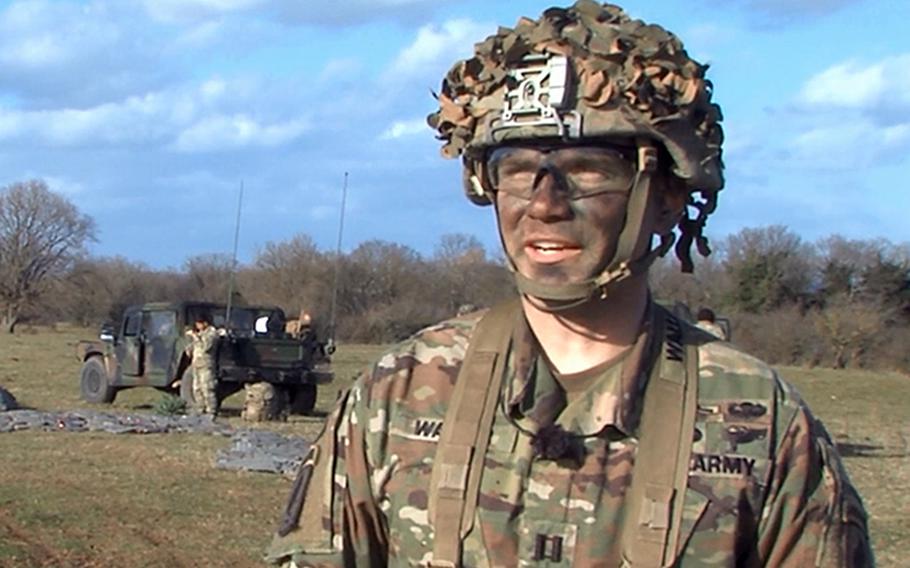 Capt. Aaron Waller of the 173rd Airborne Brigade, seen here in a screenshot from a 2020 Defense Visual Information Distribution Service video, was seriously injured in a recreational skydiving accident May 9, 2021, near Vicenza, Italy, according to Italian media reports. (Screenshot/DVIDS)

VICENZA, Italy — A skydiving accident that killed an Italian-Argentine instructor on Sunday and severely injured a U.S. paratrooper is being investigated by three different authorities, according to media reports and the 173rd Airborne Brigade.

Carabinieri overseen by a Vicenza prosecutor have begun one probe and seized the helmet-mounted video camera worn by Skydive Thiene instructor Emiliano Basile, who died in the accident, L’Eco Vicentino newspaper reported.

An autopsy on the 38-year-old’s remains will be conducted in the next few days, it said.

The two parachutes involved in the accident and backpacks containing the two men’s emergency parachutes were also seized.

The Italian authorities are hoping the American will be able to help them reconstruct what happened once his condition improves, the newspaper said.

“We are very hopeful about his recovery, very hopeful,” said Maj. Chris Bradley, a brigade spokesman. “He’s strong. I think he’s going to be able to fight through.”

Italian media have identified the American as Aaron Waller, 31. The brigade declined to confirm his identity, citing privacy issues. But Capt. Aaron J. Waller, from the 2nd Battalion, 503rd Infantry Regiment, 173rd Airborne Brigade, is featured on an Army video discussing an airborne exercise in Monte Romano, Italy, on Jan. 29, 2020.

The 173rd is conducting its own inquiries into the accident, Bradley said, including a line of duty investigation. Those investigations are required when a soldier is seriously injured or killed while on active duty, and help determine a soldier or family’s potential entitlement benefits. Only injuries and deaths attributed to a soldier’s misconduct are ruled as not in the line of duty.

A separate investigation launched by the Italian Civil Aviation Authority will try to determine what caused the accident in order to “improve the safety of the civil aviation system and to protect the persons and goods involved in any aeronautical activity,” the agency said.

Waller and Basile were engaged in a freefall jump at Thiene Airport. Waller was not participating in the jump in an official capacity, the brigade said. There are no prohibitions on recreational jumps, Bradley said.

The skydivers ran into trouble at 65-100 feet above the ground, witnesses told Italian media.

Numerous onlookers were at the airport for the opening day of a local glider club when the accident happened, the Corriere Della Sera newspaper reported.

Witnesses said the American’s parachute began to twist and that he collided violently with Basile, Corriere Della Sera reported. Both parachutes then collapsed.

Basile was an experienced instructor who had jumped some 4,000 times, Italian media reported.

It was unclear how many times Waller had performed freefall jumps. Paratroopers with the 173rd Brigade do static-line jumps, in which the parachute is automatically opened once the jumper has cleared the aircraft.