Infections remain high in Kaiserslautern, other cities, as Germany says it's beating the coronavirus 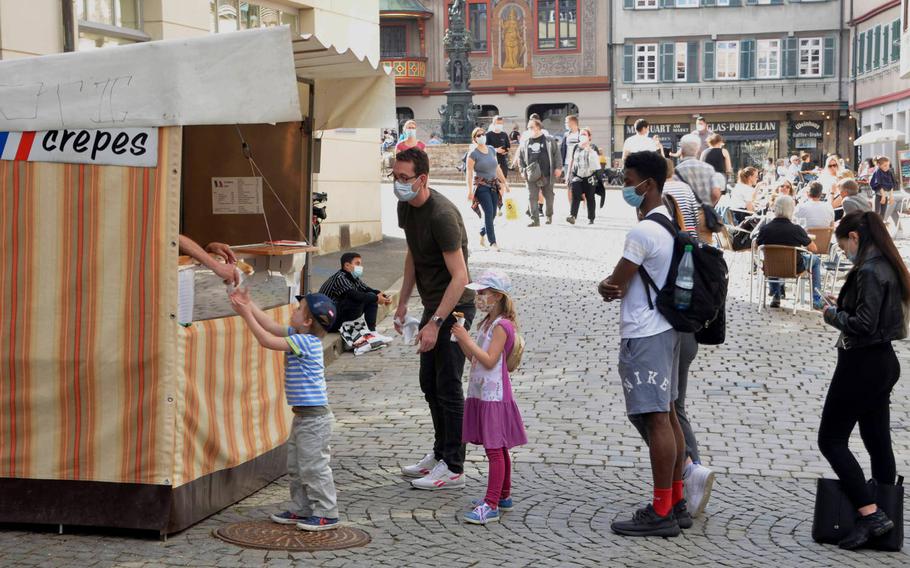 Buy Photo
A boy is handed a crepe at a stand just off Marktplatz in Tuebingen, Germany, on March 30, 2021. German Health Minister Jens Spahn said May 7, 2021, that businesses can cautiously reopen, starting by offering outdoor dining and events, but only when new cases fall below 100 per 100,000 residents per week. (Karin Zeitvogel/Stars and Stripes)

Buy Photo
A boy is handed a crepe at a stand just off Marktplatz in Tuebingen, Germany, on March 30, 2021. German Health Minister Jens Spahn said May 7, 2021, that businesses can cautiously reopen, starting by offering outdoor dining and events, but only when new cases fall below 100 per 100,000 residents per week. (Karin Zeitvogel/Stars and Stripes) 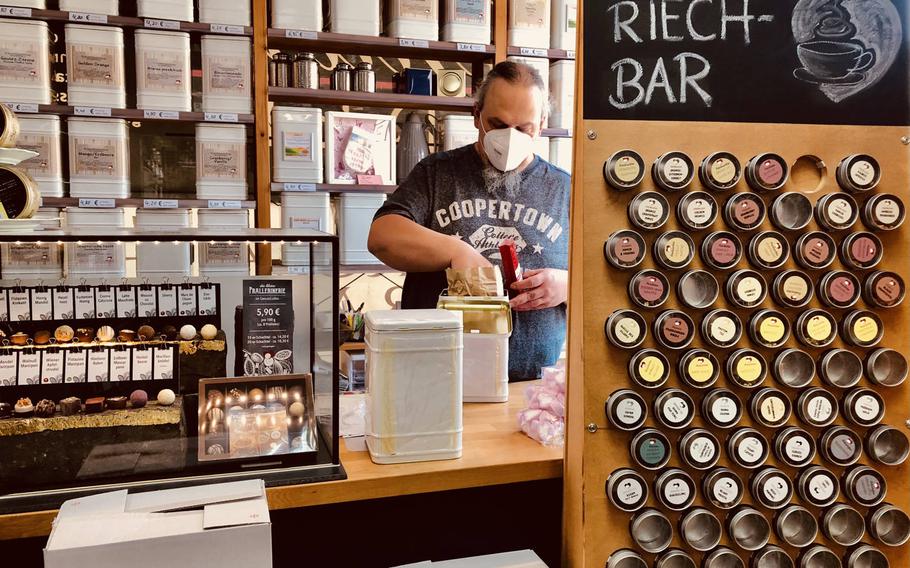 Buy Photo
The shopkeeper at the Genussladen in Altenglan, Germany, wears a face mask as he scoops tea into a bag for a customer. German health authorities said May 7, 2021, they think the third wave of the coronavirus has been halted in Germany, but warned that it could resurge if people let down their guard. (Karin Zeitvogel/Stars and Stripes) 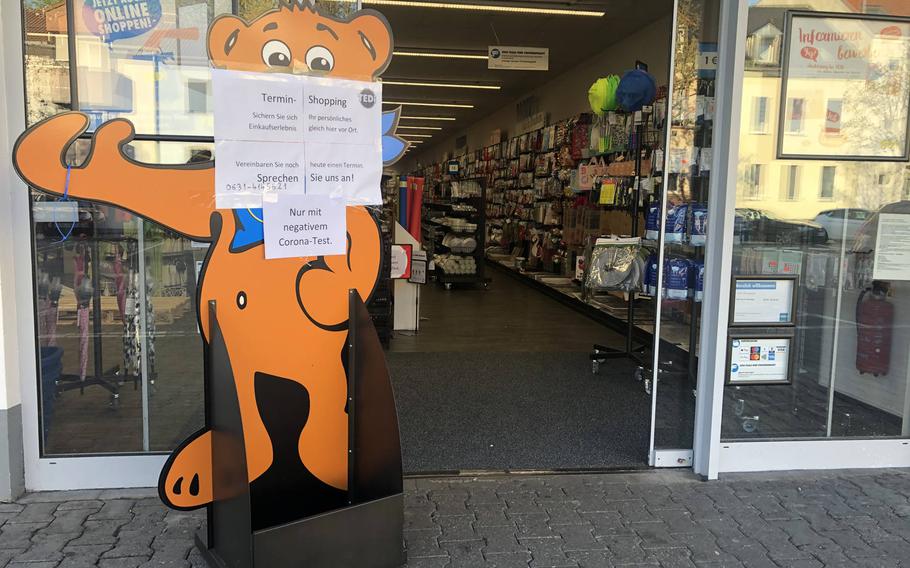 Buy Photo
A sign outside a shop in Kaiserslautern on April 24, 2021, says shoppers are welcome, provided they wear a face mask, have a negative coronavirus test and an appointment. (Karin Zeitvogel/Stars and Stripes) 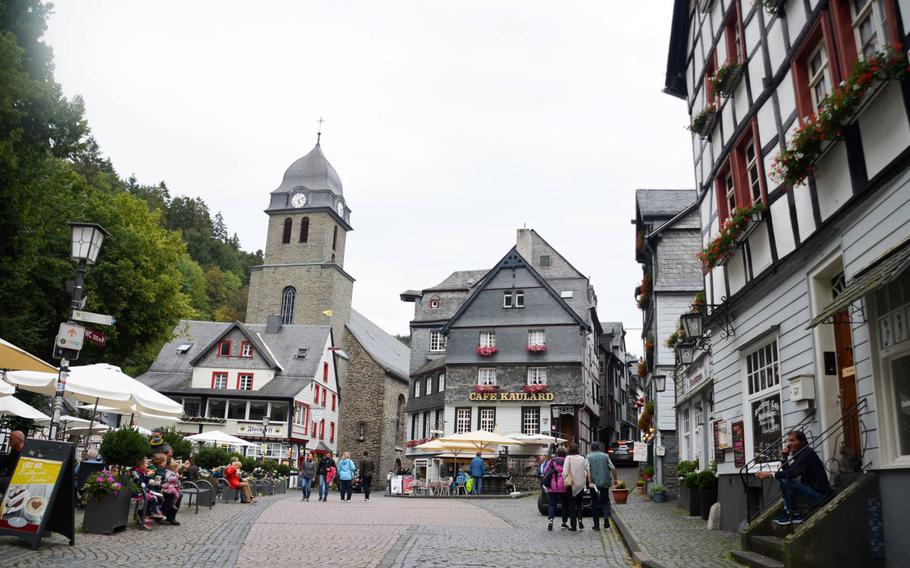 Buy Photo
People wear masks and keep several feet away from other groups in the main square in the town of Monschau, Germany, on Sept. 1, 2020, when coronavirus infections were low. They ticked up sharply again early in 2021, but officials said on May 7, 2021, that the third wave of the virus appears to have been broken. (Karin Zeitvogel/Stars and Stripes) 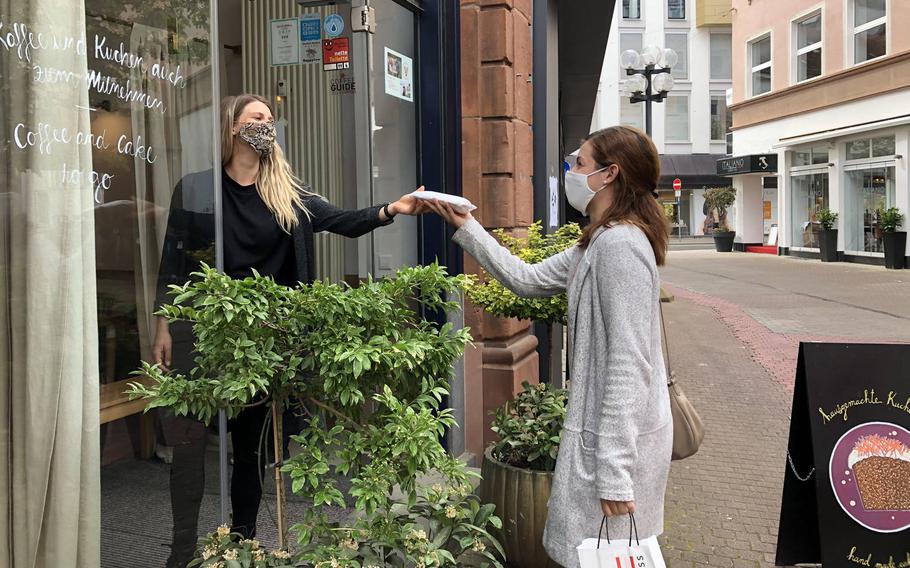 Buy Photo
A customer picks up a slice of cake at Cafe Susann in Kaiserslautern, Germany, during the first wave of the coronavirus, May 8, 2020. A year later, Germany was in a third wave of the virus and most eateries were still doing takeout only. (Karin Zeitvogel/Stars and Stripes) 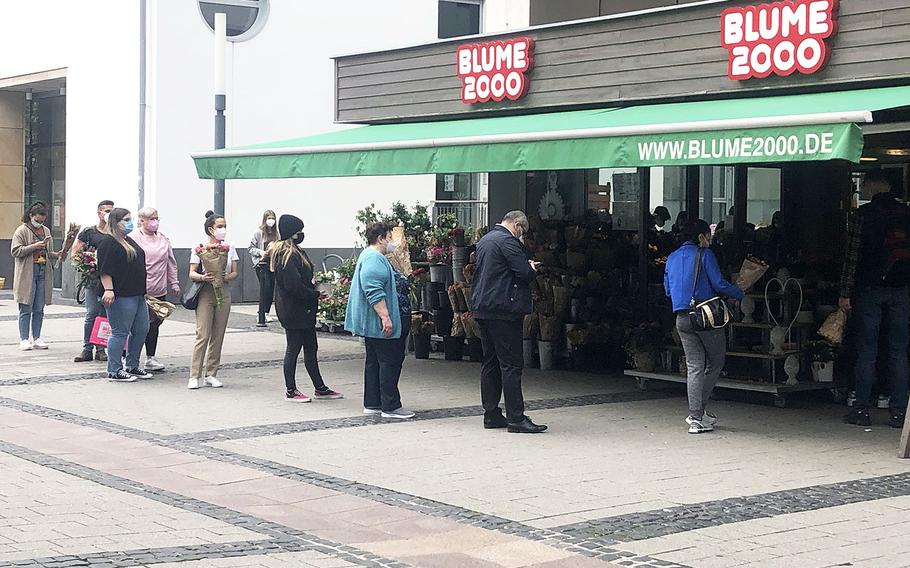 Buy Photo
People stand in line outside a flower shop in Kaiserslautern, Germany, Saturday, May 8, 2021. Many shops in the city were closed or only allowing shopping by appointment as the city's coronavirus incidence rate remained above 100 new cases per 100,000 residents. (Karin Zeitvogel/Stars and Stripes)

KAISERSLAUTERN, Germany — New coronavirus infections remain high in several German cities that are home to large U.S. military communities, even as top German health officials say the virus is on the retreat around the country.

In the city of Kaiserslautern, the number of customers allowed into shops over the weekend, including supermarkets and others that sell essential goods, was restricted as the weekly rate of new infections hovered above 140 new infections per 100,000 residents, data posted by Germany’s infectious diseases agency, the Robert Koch Institute, showed.

A traffic light system allowed no more than 30 people inside a popular drugstore in the K in Lautern mall, and long lines formed outside supermarkets and flower shops Saturday, the eve of Mother’s Day.

The new case rate in the city, where thousands of Americans live and shop, was 22 points above Germany’s national average, which fell to just under 119 cases per 100,000 inhabitants, according to RKI.

In Stuttgart, home to some 20,000 Americans affiliated with the military, the weekly incidence was above 200 new cases per 100,000 residents Saturday. In Wiesbaden, it was just below 130 new infections per 100,000.

The rates in those cities remained high even as Health Minister Jens Spahn declared Friday that the virus appeared to be in retreat around Germany.

“The third wave seems to be broken,” he told reporters Friday in Berlin.

But while infection numbers were trending downward, they were “still at a high level and they are not going down equally fast everywhere," Spahn said, warning people not to let down their guard.

When the new infection rate is above 100, federally mandated restrictions kick in, including a 10 p.m. to 5 a.m. curfew, and a requirement to be tested and make appointments before shopping for nonessential goods such as clothes.

The 7-day incidence rate has to remain below 100 per 100,000 inhabitants for five straight days before emergency restrictions are lifted, federal rules say.

In the Bavarian district of Neustadt an der Waldnaab, which includes Grafenwoehr training area, beer gardens are set to reopen Monday after numbers held below 50 per 100,000 for nearly a week, officials announced last week.

“Honestly, that’s super exciting,” said Sgt. Luis Garcia with the 41st Field Artillery Brigade. “Beer gardens are one of the greatest things about Germany, but I think they should also do quick COVID tests ... before people go in to have a drink.”

In the city of Weiden, near Grafenwoehr, new cases rose from 79 to 86 per 100,000 residents Saturday, RKI data showed.

More than 38,000 Americans affiliated with the military live in Germany’s largest state, according to U.S. Army Garrison Bavaria. Around 25,000 of them live near Grafenwoehr.

The weekly incidence rate in Kaiserslautern county, home to Ramstein Air base and several Army installations, dropped slightly Saturday from 106 new cases to 103 per 100,000 residents, data posted by RKI showed. The city is counted separately by RKI and the state.

Those numbers, however, don’t include the tens of thousands of Americans who live in the district. If they were factored in, the rate would have been around 89 new cases per 100,000, according to district councilor Ralf Lessmeister.

At that level, leisure facilities such as saunas, gyms, theatres, opera houses and concert halls could reopen, restaurants would not be limited to just takeout orders, and shopping for non-essential items would not require appointments or tests. Hygiene measures such as wearing medical face masks and social distancing would still be required, though.

Lessmeister sends infection data, including and excluding the U.S. military community, to state officials, who pass on both sets of numbers to RKI, Rheinland-Pfalz spokeswoman Stefanie Schneider told Stars and Stripes in February.

But RKI posts only the rate that excludes the U.S. military population, she said.

Lessmeister and the mayor of Ramstein-Miesenbach, Ralf Hechler, have gone to court to try to have the U.S. military community included in the population tally.

Stars and Stripes reporters Immanuel Johnson and Marcus Kloeckner contributed to this report.