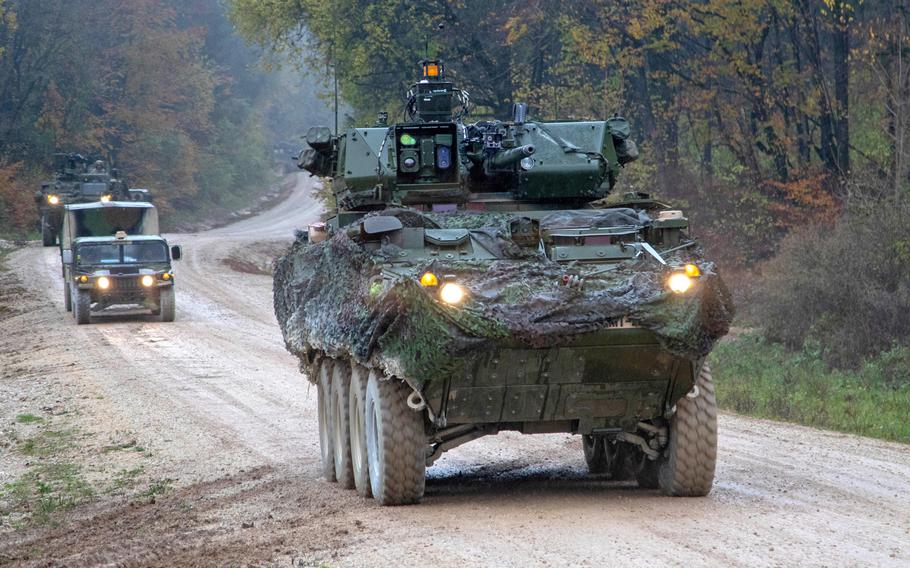 A Stryker armored vehicle from 1st Squadron, 2nd Cavalry Regiment, moves to a forward position during an exercise in Hohenfels, Germany, in November 2019. Vilseck-based 2 CR is one of the units picked to leave Germany as part of the Pentagon's plan to cut troops in the country. (Ethan Valetski/U.S. Army)

STUTTGART, Germany — The plan for a large-scale U.S. force reduction in Germany remains a work in progress, Pentagon officials said Wednesday as House lawmakers questioned whether the plan to pull 12,000 troops from the country makes fiscal or strategic sense.

“I don’t think this plan was particularly well thought out,” Rep. Adam Smith, D-Wash., said during a House Armed Services Committee hearing on the proposal.

Smith, the chairman of the committee, also blasted Pentagon officials for failing to describe in any detail how and when the push to cut troops in Germany would be implemented.

"We are not getting the level of insight on this decision that we should,” he said. “The level of detail we are getting here is just not acceptable. ... We need to hear better what the hell is going on.”

James Anderson, acting undersecretary of defense for policy, and Air Force Lt. Gen. David W. Allvin, the director for strategy, plans, and policy for the Joint Staff, testified Wednesday on the Pentagon effort to move roughly 5,600 troops in Germany to different locations in Europe and about 6,400 others back to the United States. But the plan was met with skepticism by several lawmakers who raised concerns about the strategy. Their questions included the high costs of moving large units and the possibility of sparking more aggression in Eastern Europe from Russia.

“It looks like we are pulling back,” said Rep. Bradley Byrne, R-Ala.

Anderson defended the strategy as one that will give the military more “flexibility” and make it more unpredictable to adversaries when it rotates forces back and forth to Europe. He said the hope is a clearer plan for how to implement the drawdown would emerge by 2021 but executing the initiative will be a multiyear endeavor.

“It will take some time,” Anderson said. “It’s months of planning and years of execution.”

Cost estimates also are still being formulated, but the moves are expected to be in the single-digit billions, he said.

The plan to downsize U.S. forces in Germany, which came in response to a White House directive, was announced in July and affects a wide range of units. The biggest changes call for sending 4,500 soldiers with the 2nd Cavalry Regiment, based in Vilseck, Germany, back to the U.S. and relocating the Stuttgart-based U.S. European Command to Belgium. U.S. Africa Command, also in Stuttgart, will move to a location that has yet to be determined.

Smith said lawmakers, during an earlier briefing with Pentagon officials, were told the idea of moving AFRICOM wasn’t about strategy but to help the military reach the troop-reduction numbers mandated from the White House.