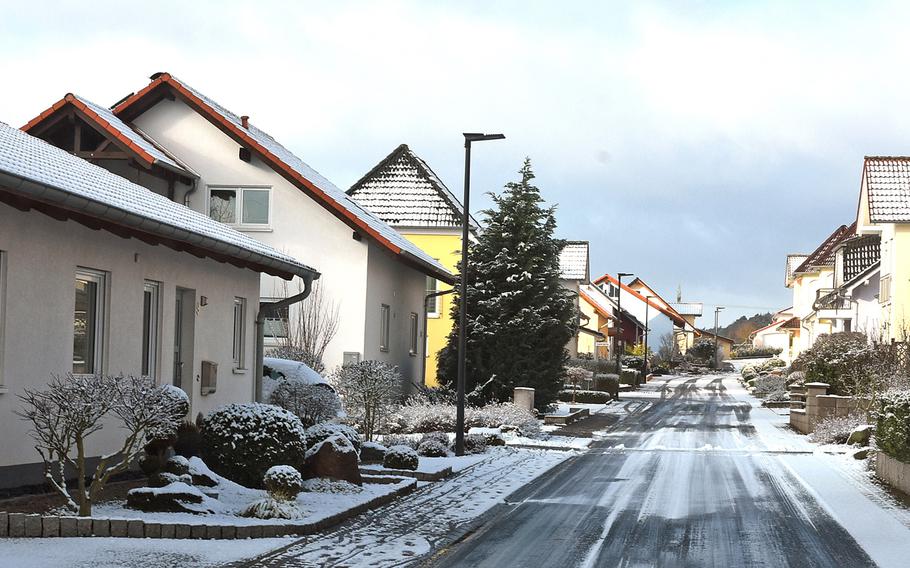 The KMC Housing Office on Vogelweh, an air base near Kaiserslautern, Germany, serves the largest U.S. military community overseas. The housing office will no longer vet off-base rental leases for excessive rates, meaning landlords who charge higher rents will be able to list their property with the housing office. (Jennifer H. Svan/Stars and Stripes)

KAISERSLAUTERN, Germany — Americans assigned to Air Force bases in Europe could soon be paying higher rents for off-base homes after revised Pentagon rules removed the ceiling on what landlords can charge tenants.

Housing offices will still vet homes for safety and help mediate disputes between landlords and tenants, but landlords are free to set their own prices within the parameters of German law, officials said.

The revised rules apply across the Defense Department, officials in Germany said, but thus far no changes had been announced elsewhere.

In the Kaiserslautern area, where a majority of the roughly 50,000 Americans tied to the military community live off base, the new guidance is already boosting new lease prices.

Current tenants won’t be immediately affected because German law prohibits landlords from raising the rent on contracts during the first 15 months of a lease, Kilker said.

Previously, housing officials could refuse to list a property if they thought the rent was too high, Kilker and another official at Ramstein said.

Military personnel and most civilians assigned overseas receive a housing allowance from the U.S. government to cover rent and utilities based on rank or grade, family size and the local cost of living.

Unlike in the U.S., service members cannot keep any extra allowance that they don’t use.

With the new rules, junior enlisted personnel may have to look for rental homes farther away from bases in order to keep their rent and utilities within their housing allowance, officials said.

But not everyone needs to go through the housing office to find a rental property.

Military personnel and Air Force civilians in Kaiserslautern must get the housing office to approve their lease, but Army civilians, Defense Department teachers and contractors do not. However, the amount they are reimbursed for rent and utilities is limited by the housing allowance rules. The revised rule may encourage more landlords to list their properties with the housing office, said Scott Vincent of the Air Force Installation and Mission Support Center, Detachment 4, at Ramstein.

“The housing office won’t set their rate, which I think is what most of them were probably concerned about,” he said.

Driving the change is the removal from the Joint Travel Regulations last spring of language that said military housing offices could “refuse to approve a lease” if the rental amount was “excessive and not reflective of available housing,” Vincent said.

The new rule should apply to all military housing offices that vet rental rates, Vincent said.

“We let our wings know … that if they were engaging in this practice, they no longer had the authority” to do so, he said.

Though housing offices will no longer be gatekeepers for rental rates, landlords don’t have carte blanche to price-gouge, Air Force officials said. Germany has some of the toughest rent control laws in Europe and landlords may only increase rent by small increments.

They also have to justify the rent increase. If they modernize or add energy conservation improvements, for example, Vincent said, they can increase the rent. German law caps price hikes to 20% within three years, he said.

Outside of Germany, the change likely will affect rental rates around Aviano Air Base, Italy. Aviano’s community housing guidelines state they “will not approve a lease if the rental amount is excessive and not reflective of available housing.”

The base is developing a plan that will support airmen while maintaining community relations, Aviano spokeswoman Maj. Sarah Babcock said.

In the Asia-Pacific region, Yokota Air Base officials in Japan said they were checking with Pacific Air Forces to see if any guidelines had been sent out. Housing officials at Osan Air Base in South Korea, meanwhile, said they did not get involved with approving leases based on rental rates but would advise service members if their lease exceeded their housing allowance.

Stars and Stripes reporters Kent Harris in Aviano and Matthew Keeler in Osan contributed to this story.