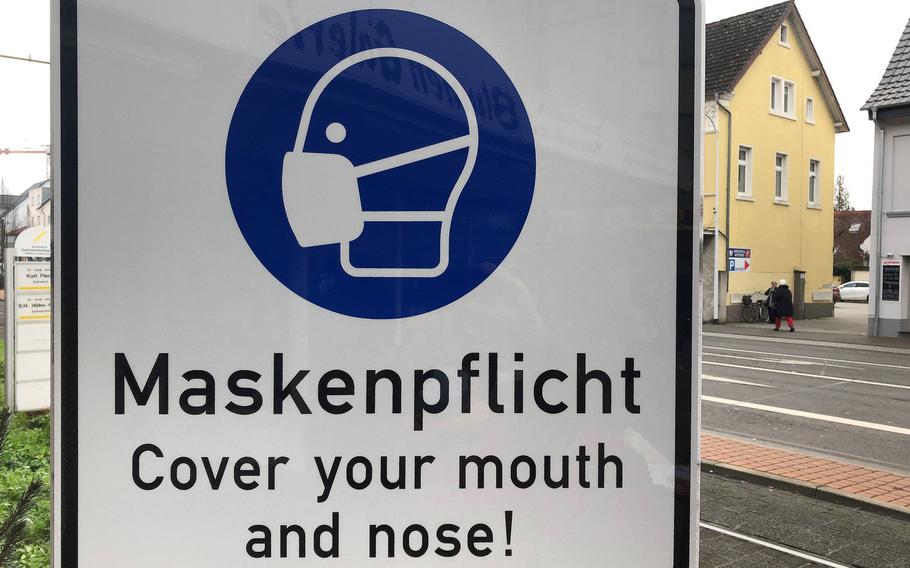 Tighter coronavirus restrictions will begin in Germany on Jan. 11, 2021. (Michael Abrams/Stars and Stripes)

KAISERSLAUTERN, Germany – Travelers from the U.S. and other countries with high rates of coronavirus infections will need to produce a negative test to enter Germany starting Monday, when tougher rules and restrictions aimed at slowing the spread of the virus take effect across the country, officials said.

They will also need to test negative a second time to get out of quarantine before 10 days, say the new rules announced after an hourslong meeting on Tuesday between Chancellor Angela Merkel and the heads of Germany's 16 states.

“The measures we’ve announced are drastic,” Merkel said after the meeting. “They are not just a continuation of what we did before Christmas, but are tougher, given the situation.”

Germany, like many other European countries, has struggled to contain the spread of a new, more infectious strain of the virus. A partial lockdown in November failed to do the trick and was followed by tougher restrictions and more business closures last month.

The new, even tougher rules announced Tuesday also include travel restrictions in areas where more than 200 new cases of the virus per 100,000 residents have been registered over the previous seven days. Starting Monday, residents of these so-called hotspots will not be allowed to travel more than 15 kilometers — just over nine miles — from the city or town they live in.

That is unlikely to affect most members of the U.S. military community in Germany.

Although U.S. military commands, which impose their own coronavirus restrictions, have said that service members and civilians working for the military must follow whichever rules are stricter — the German authorities’ or the military's — the 7-day incidence for coronavirus in cities with sizeable American military populations has remained below the rate at which German authorities consider a district a virus hotspot.

Weekly infections in the county in Bavaria that includes Vilseck were just over 89 per 100,000 residents, and the 7-day incidence in the county where Grafenwoehr is was around 120 new cases per 100,000 people, RKI said.

The 21st Theater Sustainment Command last month restricted travel for troops under its command to 30 kilometers from their places of residence. It was not immediately clear if the command, which has troops in Germany, the Benelux countries, Kosovo, Bulgaria and Romania, would tighten up travel restrictions, following the new German rules.

Germany also extended the closures of restaurants, hairdressers, many retail shops and schools, and limited private gatherings to “your own household, with a maximum of one other person” from a different household. Until Monday, five members of a second household, not counting children under 14, are allowed at such gatherings.

U.S. Army Garrison Stuttgart took the limits on gatherings a step further, with garrison commander, Col. Jason Condrey, saying on AFN Radio Wednesday that children of all ages will be included in the count of people allowed at private social events. He also said remote learning will continue until at least Jan. 18.

U.S. Army Garrison Wiesbaden was expected to issue guidance on the new German rules by Friday, a spokesperson said.

Not all of Germany’s states agree with the new measures, however. Georg Maier, interior minister of the state of Thuringia, which has one of the highest weekly infection rates in Germany, said restricting travel to a narrow radius would have “psychological and practical side-effects” on residents and would be impossible to enforce. The leader of Lower Saxony, Stephan Weil, questioned whether the government was allowed to restrict travel under German law.

The rules in place until Monday do not require a coronavirus test to enter Germany, and, up to now, the government has only recommended that leisure travel be restricted.

But, Merkel told reporters Tuesday, “We must be especially careful now. We are in a new and extraordinary situation.”