Here's a look inside a military quarantine facility in Germany Buy Photo
Soldiers at the Task Force Willkommen quarantine facilities on Rhine Ordnance Barracks in Kaiserslautern, Germany, clean their field latrines and showers, Nov. 12, 2020, a daily chore the soldiers perform during their two weeks of restricted movement before moving on to their units. (Jennifer H. Svan/Stars and Stripes)

Buy Photo
Soldiers at the Task Force Willkommen quarantine facilities on Rhine Ordnance Barracks in Kaiserslautern, Germany, clean their field latrines and showers, Nov. 12, 2020, a daily chore the soldiers perform during their two weeks of restricted movement before moving on to their units. (Jennifer H. Svan/Stars and Stripes) 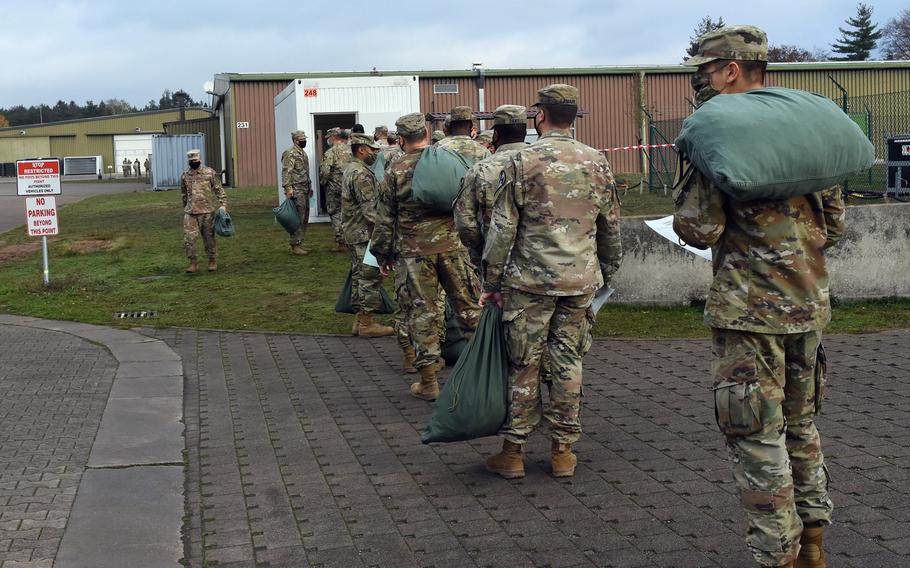 Buy Photo
Soldiers rest on their cots inside a warehouse at Rhine Ordnance Barracks, Nov. 12, 2020, part of the Task Force Willkommen mission in Kaiserslautern, Germany, to keep newly arriving soldiers to Germany and Europe from spreading the coronavirus to their units and the local community. The 21st Theater Sustainment Command is currently in charge of the operation. (Jennifer H. Svan/Stars and Stripes) 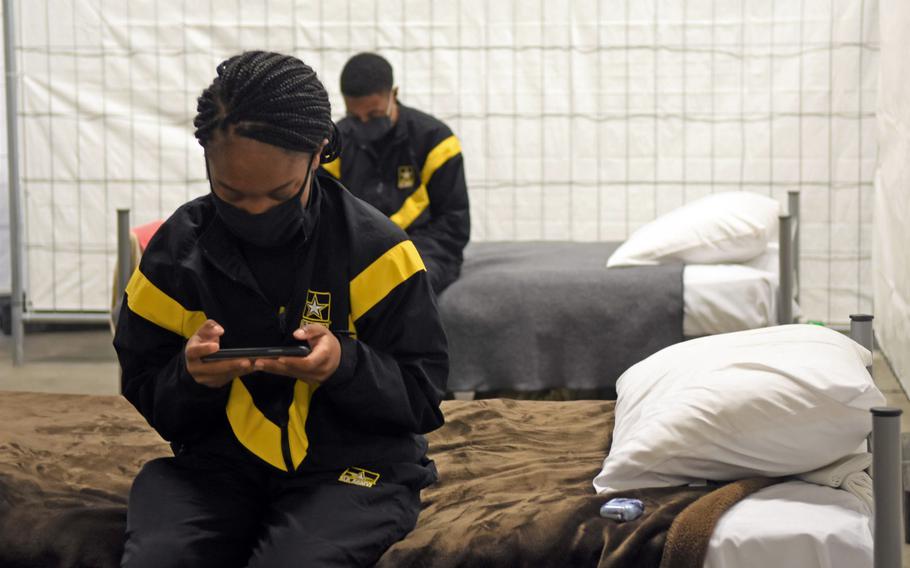 Buy Photo
Army Pfc. Cherisse Bishop, foreground, and Sgt. Brithany Joseph check their devices while resting on their cots inside the quarantine facilities at Rhine Ordnance Barracks in Kaiserslautern, Germany, Nov. 12, 2020. Newly arriving soldiers wear Army physical training gear to make them visibly distinct from other soldiers who are further along in the quarantine process. (Jennifer H. Svan/Stars and Stripes) 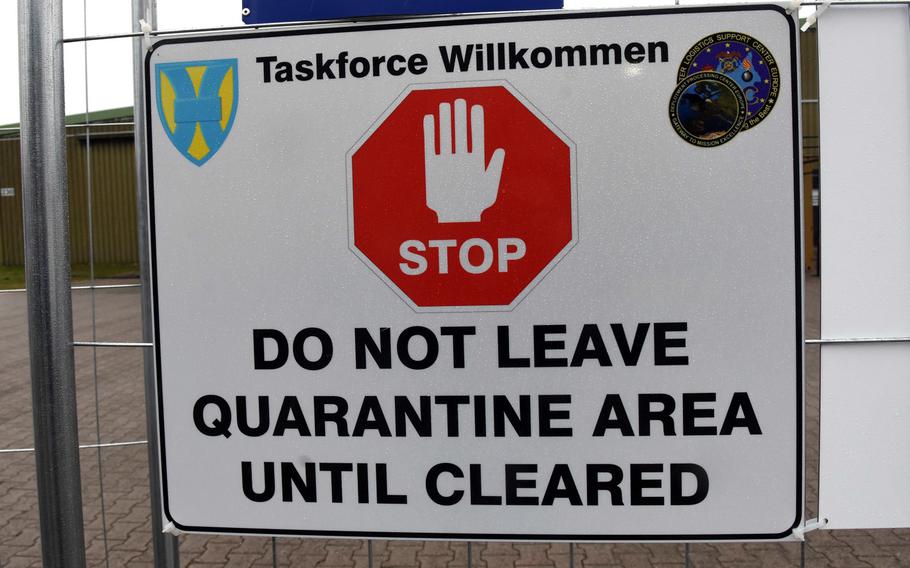 Buy Photo
Soldiers play a game of cards Nov. 12, 2020, while under quarantine for 14 days at Rhine Ordnance Barracks in Kaiserslautern, Germany. Unaccompanied, junior enlisted soldiers moving to Germany or transiting through the country on the way to a deployment in Europe quarantine at the facility for two weeks until cleared to go to their units or destination, a process aimed at stopping the spread of the coronavirus. (Jennifer H. Svan/Stars and Stripes) 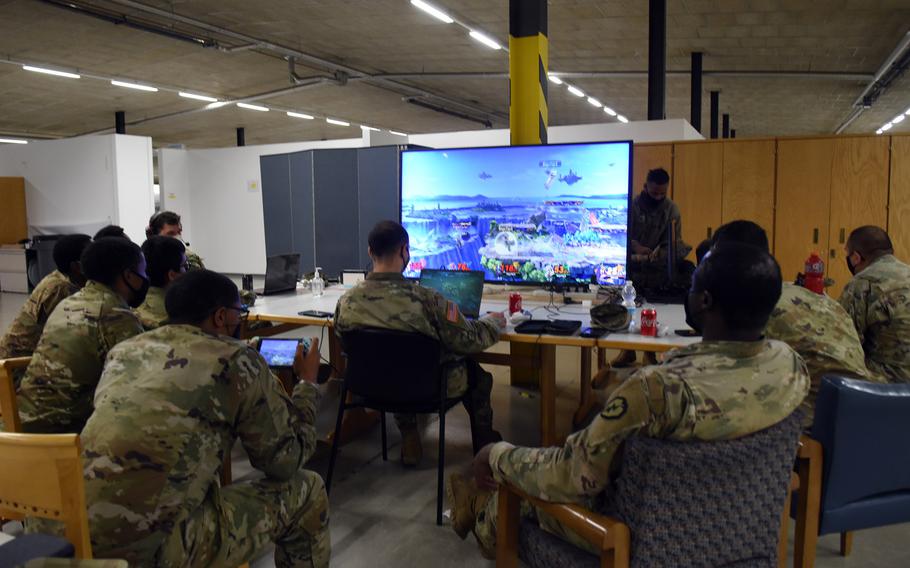 Buy Photo
Playing video games is one of the most popular activities for soldiers in quarantine at Rhine Ordnance Barracks in Kaiserslautern, Germany. The Army says it tries to make the two-week quarantine as fun as possible while keeping soldiers healthy. (Jennifer H. Svan/Stars and Stripes) Soldiers line up to get a coronavirus test on the 10th day in isolation at the quarantine center at Task Force Willkommen quarantine facilities on Rhine Ordnance Barracks in Kaiserslautern, Germany, in September 2020. (MICHAEL ABRAMS/STARS AND STRIPES) Spc. Elijah Borskey of the 212th Combat Support Hospital gives a soldier on his 10th day in isolation a coronavirus test at the Task Force Willkommen quarantine facilities on Rhine Ordnance Barracks in Kaiserslautern, Germany, in September 2020. (MICHAEL ABRAMS/STARS AND STRIPES)

KAISERSLAUTERN, Germany — Welcome to Germany. Grab a cot, have some chow, and don’t go anywhere.

The aim of the mission is to prevent the coronavirus from spreading within Army units in Europe, to protect the local community, and to keep soldiers safe and fit for their jobs, officials said.

And so far, it appears to be working.

Fourteen days of quarantine “is our first line of defense,” against the virus, said Maj. Selwyn Johnson, a spokesman for the 21st Theater Sustainment Command, which took charge of the task force this fall from the 7th Mission Support Command, an Army Reserve unit based in Kaiserslautern.

The virus has been kept at bay among troops arriving in Germany before moving on to their units elsewhere in Europe, the Army says.

“We have not had any reports of where a soldier has … got to their unit and caused an outbreak,” said Capt. Sharon Lee, the task force’s operations officer.

Soldiers lodge in sparse warehouses that are fenced-off from the rest of Rhine Ordnance Barracks, with personal devices offering their only connection to the outside world.

“WhatsApp, Facebook, Instagram, a lot of Netflix” helped Spc. Lee Brown, 38, a heavy equipment operator based at Fort Bragg, N.C., find his “own zone” during his first few days in quarantine before heading to Poland for a monthslong deployment, he said.

Brown is one of about 3,000 soldiers who have quarantined at ROB since May. Most came from the U.S., which has the highest number of coronavirus infections and deaths of any country. Many of them, including Brown, know someone back home who died of the disease caused by the virus.

In addition to quarantining, they follow a strict routine of social distancing, wearing face masks and frequent hand-washing.

“It feels like a high-speed boys’ camp,” Brown said. “The organization, the structure, the discipline.”

The prevention routine starts when soldiers are swabbed after arriving in Germany.

They’re issued government linens, assigned a cot, and must wear Army physical training gear to visibly distinguish them from other soldiers who are further along in quarantine.

They rise at 6:30 a.m., mop and sweep their field latrines in the morning, and march in a group to chow three times a day. The only other time they can leave quarantine is for a bathroom or smoke break.

“It’s long hours, pretty much marked by food every couple of hours, and then a long night with no food,” said Army Sgt. Evan Paige, 26, a medic headed to Baumholder from Hawaii.

But WiFi is free and Paige had a Kindle to pass the time. An external battery pack is an essential quarantine item though, given the lack of outlets, he said.

If a soldier tests positive when they arrive but shows no symptoms, they’re moved to medical isolation on Sembach; if they’re sick, they’re taken to Landstuhl Regional Medical Center.

If their first test comes back negative, they move to a livelier warehouse, where soldiers wearing face masks and staying a safe distance away from each other were playing video games and cards on a recent morning.

Nearby were table tennis and computers they could use in an activity area run by the USO, where they could grab snacks or check out magazines, books and board games.

Weights were set up outdoors and soldiers were able to visit the post shoppette, under escort. Soldiers also get time to complete newcomer training.

Pfc. Cherisse Bishop, 19, arriving from Fort Bragg, was one of only two women in the new arrival area earlier this month. She was headed to Poland once she’d finished quarantining.

Being in quarantine. she said, was relaxing. “Not much is expected of me, just to clean,” she said.

Despite the sparse living conditions, “It doesn’t feel like a deployment,” said Sgt. Chris James, a cavalry scout who left the Army in 2018 but rejoined this year after the pandemic caused work in his field as a solar panel electrician to dry up.

Twelve days into his quarantine, James was waiting for the results of his second test. A negative result would mean he could head to Grafenwoehr in Bavaria to join his unit.