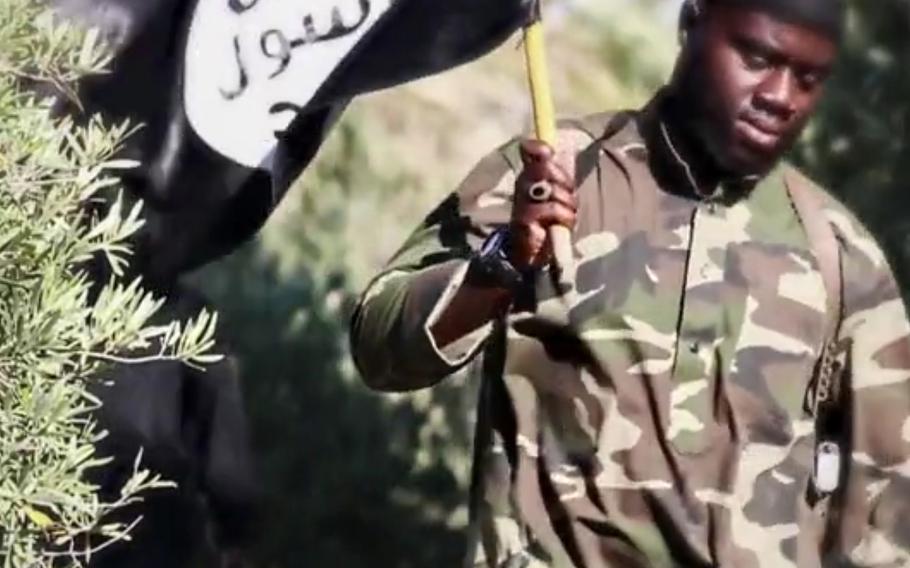 BERLIN — German prosecutors have launched a murder and war crimes investigation of an Islamic State fighter who claimed in interviews that he had refused to engage in violence in Syria but was caught on video taking part in a public execution, a German official said.

Harry Sarfo, 28, a German citizen whose sanitized accounts of his experiences in Syria appeared on front pages of major newspapers and television broadcasts, is now suspected of playing a direct role in the killing of seven hostages in the ancient city of Palmyra last year.

German officials said the inquiry was opened after The Washington Post obtained and published a video that showed Sarfo moving hostages into position in a public square, raising his fist in celebration as they fell amid a barrage of machine-gun fire, and apparently firing his weapon at one of the downed men.

"We are investigating Harry Sarfo for membership in a foreign terrorist organization, murder and war crimes," said Frauke Koehler, spokeswoman for the federal prosecutors office in Karlsruhe, Germany, which is handling the case.

Officials said that no new charges have been filed, but that the decision to open a new investigation reflects a substantial change in evidence. A conviction on murder and war crimes charges could multiply a three-year sentence Sarfo was given earlier this year for lesser crimes, including violation of German weapons laws.

A senior German security official said that investigators determined that the video obtained by The Post was authentic and convinced authorities that Sarfo had lied about the limits of his involvement with the Islamic State during a three-month stay in Syria in 2015.

"Harry did play down his role and participated in things that he had not been convicted of or sentenced for because we did not know about them," the official said. The official said that investigators still think Sarfo provided some accurate information about other German fighters he encountered in Syria, but question much of what he told investigators and reporters about the inner workings of the Islamic State.

"We have great doubt when it comes to certain information he provided," the official said. As Sarfo turned into a "media phenomenon," the official said, "the more interviews he gave, the more new things he seemed to have remembered.'"

In interviews, Sarfo denounced the Islamic State and talked at length about the group's efforts to orchestrate attacks against the West.

German authorities allowed news organizations from Europe and the United States to meet with Sarfo at a prison in Bremen, apparently in the hopes that his account would serve as a cautionary tale and discourage other militants from traveling to Syria.

Sarfo, who is of Ghanaian descent, was detained upon his return to Germany last year. He insisted that he had merely "stood on the side" and "said no to the killings" that the terrorist group staged, according to court filings.

The claims of innocence he made to news organizations were more emphatic.

Speaking on camera with German broadcaster ZDF this year, Sarfo said that he and other fighters were driven to Palmyra and asked to take part in the execution of seven civilians.

"I refused. I did not raise my hand," Sarfo told ZDF, which worked with The Post on follow-up reporting after the new video surfaced. Even when pressured by more senior Islamic State operatives, Sarfo said he stood firm: "I don't know this person. He didn't do me any harm. I won't kill him."

In an April interview with the British newspaper the Independent, Sarfo denounced the Islamic State as "not just un-Islamic, it is inhuman," and said that he had "witnessed stonings, beheadings, shootings, hands chopped off and many other things" but never committed such violence himself.

Sarfo's denunciations caught the attention of the Islamic State. A person inside the group provided video of Sarfo's involvement in the Palmyra execution - footage that had been captured by an Islamic State camera crew, but not included in the group's propaganda releases.

The twists in the Sarfo case serve as a sobering example of how little European security services know about hundreds of militants now returning to the continent after fighting in Syria. More than 6,000 militants have left Europe to fight in Syria over the past five years, a flow that has begun to reverse itself this year as the Islamic State has lost territory.