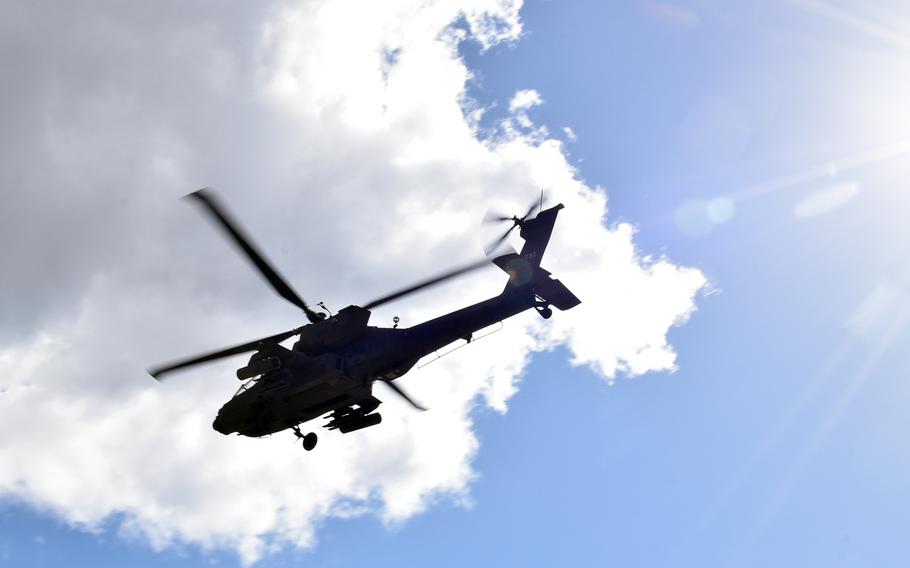 ANSBACH, Germany — A German protest group called Wednesday for low-altitude military flights to be banned after an Army attack helicopter cut six high-voltage power lines when it made an emergency landing in the Bavaria region, officials and media reports said.

“The extremely lax flight regulations for U.S. helicopters stationed in Ansbach-Katterbach and Illesheim put lives in danger,” the Etz Langt’s pressure group said in a statement posted on its website.

“Flights as low three meters above ground and landings in open fields and near residential areas are allowed. This is totally irresponsible,” the group said.

More than 200 firefighters responded to a field near the town of Linden on Tuesday after getting reports of a helicopter crash, said area fire chief Johannes Hofmann, who said he was the first on the scene.

“We did not know if it was a bad crash and if the helicopter was on fire,” he said.

But when Hofmann arrived, he saw the AH-64D Apache helicopter standing in a field, with its two crewmembers outside. Pictures and video taken by a local photographer appeared to show the helicopter’s windshield cracked in several places.

“One of the pilots said that he felt some pain in his back,” Hofmann said. “But he did not want to be checked out by our paramedics.”

The Apache and crew were from the 12th Combat Aviation Brigade, stationed in Ansbach, about 20 miles away, the Army said in a statement. The incident happened during a routine training flight.

“One of our Apache helicopters had to land quickly and unexpectedly,” said Col. John B. Broam, the brigade commander. “There are no reported injuries at this time.”

“It has to be to ensure we are constantly proficient and ready to respond to any mission we are called on to perform,” he said. “We balance that difficult training with taking every safety precaution we can.”

Hofmann, who has been a firefighter in the region since 2004, said he has seen a lot, but he was in disbelief when initial reports came in of a helicopter crash. He and other firefighters thought it might have been a downed drone.

Shortly after local fire crews arrived on the scene, Army military police also showed up. The German crews then began taking care of the power lines.

A power outage lasted only a few milliseconds, but the emergency landing had a somewhat longer-lasting impact. The A7 highway between Rothenburg ob der Tauber and Bad Windsheim was shut down in both directions for several hours as crews worked to repair the power line, Hofmann said. It had reopened by Wednesday evening, local media reported.

The area where the emergency landing occurred is “not suitable for risky flight training,” said the Etz Langt’s protest group.

“In the U.S., there are plenty of uninhabited areas where no residents would be in danger,” the group said. “If Donald Trump wants to play war games, he should do it at home, not here.”