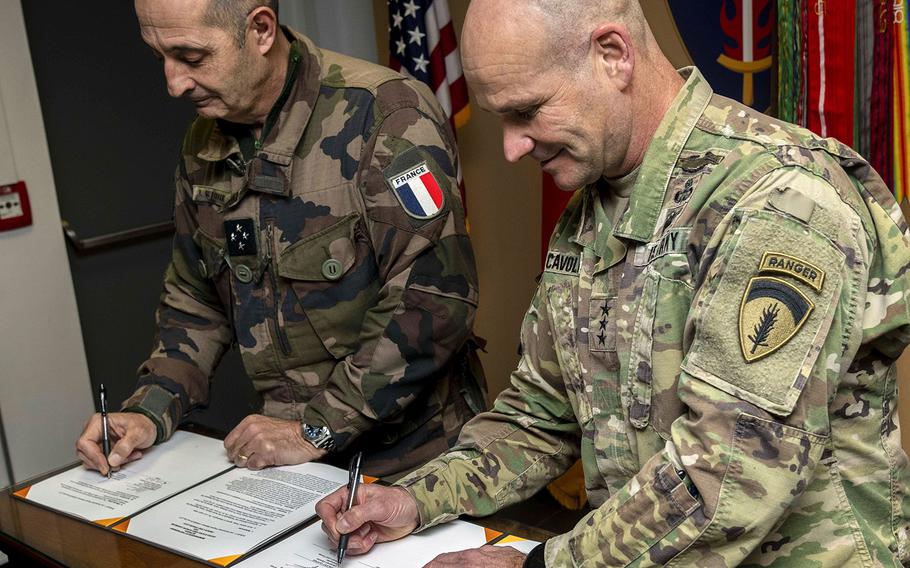 STUTTGART, Germany — The top Army general in Europe was possibly exposed to the coronavirus during a meeting Friday at his Wiesbaden headquarters, where NATO land commanders were gathered to discuss plans for one of the largest American exercises on the Continent since the Cold War, the service said Tuesday.

Twenty-four senior military representatives from NATO and partner countries attended the meeting, where commanders discussed land power and how best to manage the massive influx of equipment connected to Defender-Europe-20 drills.

The generals also deliberated on “proactive steps nations and military forces are taking to prevent the spread of [coronavirus] during the exercise,” USAREUR said in a statement shortly after the meeting.

By Monday, the Army announced Cavoli and other staffers were potentially exposed to the virus during the talks.

Poland's defense ministry on Tuesday said one of its top officers attending the Wiesbaden meeting — Gen. Jaroslaw Mika — had been infected with the virus.

“After returning from an army gathering in Germany, General Mika has been diagnosed with the coronavirus. Those accompanying him have been quarantined,” Poland’s defense ministry wrote Tuesday on Twitter.

So far, the Army is still planning to move forward with the Defender-Europe exercise, which involves bringing about 20,000 soldiers from the United States to Germany in the coming weeks.

Combat gear already has begun to arrive in Europe and major exercises are slated to being next month. The Pentagon is spending about $360 million on the effort, which is reminiscent of Cold War-era Return of Forces to Germany drills.

But coronavirus is already forcing the military to alter other major exercises because of health concerns, raising questions about the feasibility of continuing Defender-Europe as planned.

Last week, U.S. European Command cut short a major air defense exercise in Israel. About 25 U.S. troops now taking part in exercises in Norway are in self-quarantine because a Norwegian soldier who was infected with the virus. And on Tuesday, U.S. Africa Command announced it was scaling back one of its largest drills, African Lion, in Morocco.

USAREUR, however, said its business as usual for now.

“At this time, there are no significant impacts on Defender-Europe 20 due to the coronavirus,” USAREUR said.