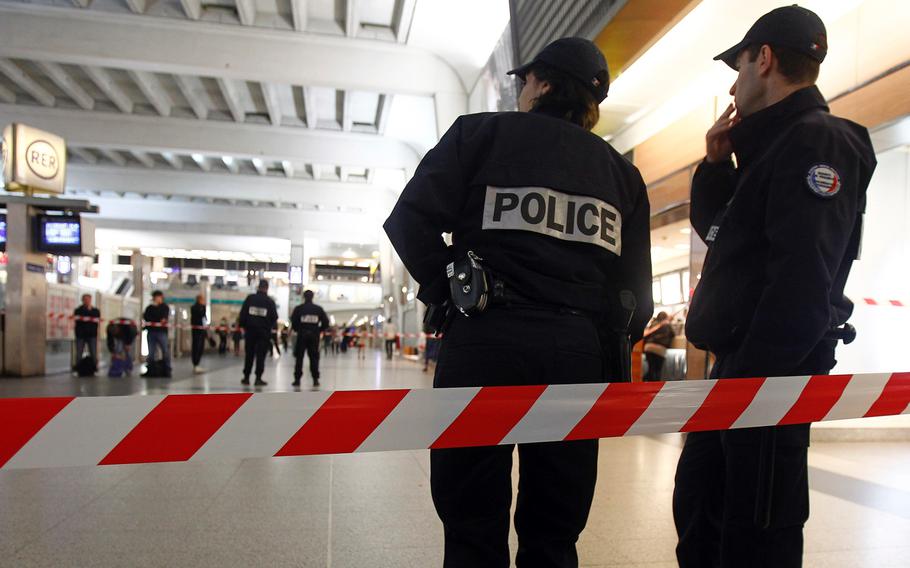 Police officers stand near the cordoned off spot where a French soldier was stabbed in the throat in the busy commercial district of La Defense, outside Paris, on Saturday May 25, 2013. (Remy de la Mauviniere/AP)

PARIS -- A French soldier was stabbed in the throat in a busy commercial district outside Paris on Saturday, and France's president said authorities are investigating any possible links with the recent slaying of a British soldier.

President Francois Hollande said the identity of the attacker was unknown and cautioned against jumping to conclusions about the assault on the uniformed soldier in the La Defense shopping area. The life of the 23-year-old soldier was not in danger, the Interior Ministry said in a statement.

The stabbing follows the slaying Wednesday of a British soldier, who was brutally stabbed on a London street in broad daylight in a suspected terrorist attack that has raised fears of potential copycat strikes.

"There could be a link, but we will look at all the elements," Hollande said during a news conference in Ethiopia, where he was traveling.

The British soldier, 25-year-old Lee Rigby, was attacked while walking outside the Royal Artillery Barracks in the Woolwich area of south London.

The gruesome scene was recorded on witnesses' cellphones, and a video has emerged in which one of the two suspects - his hands bloodied - boasted of their exploits and warned of more violence as the soldier lay on the ground. Holding bloody knives and a meat cleaver, the suspects waited for the arrival of police, who shot them in the legs, according to witnesses.

In the video, one of the suspects declared, "We swear by almighty Allah we will never stop fighting you ... We must fight them as they fight us."

French security forces have been on heightened alert since their country launched a military intervention in the African nation of Mali in January to regain territory seized by Islamic radicals.