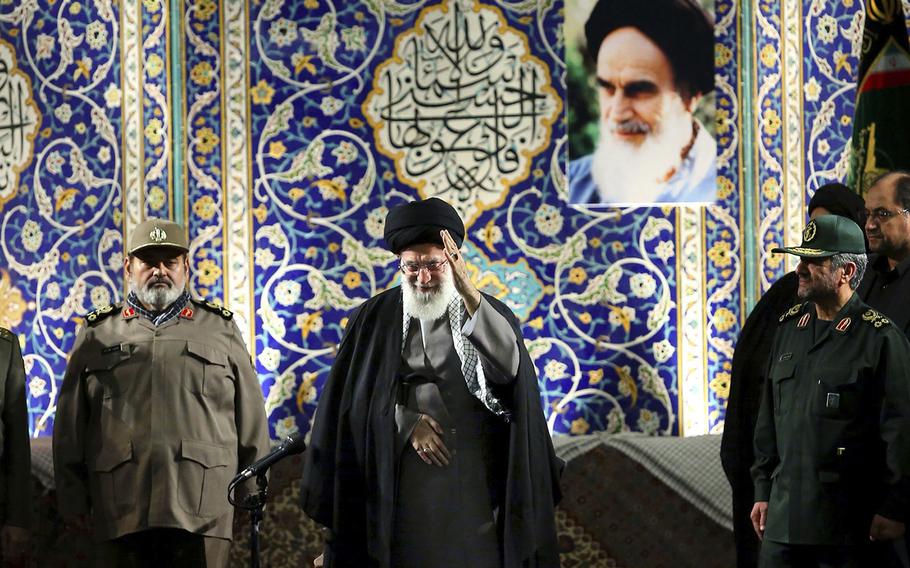 In this photo released by an official website of the Iranian supreme leader's office on Wednesday, Nov. 20, 2013, Iran's Supreme Leader Ayatollah Ali Khamenei waves to members of the paramilitary Basij force at the Imam Khomeini Grand Mosque in Tehran, Iran. Khamenei says pressure from economic sanctions will never force the country into unwelcome concessions as nuclear negotiators resumed talks with world powers. Khamenei also blasted U.S. government policies, including threats of military action, but said Iran has "no animosity'" toward the American people and seeks "friendly" relations. (Office of the Supreme Leader/AP Photo)

PARIS — The French government spokeswoman says President Francois Hollande believes comments by Iran's supreme leader about Israel are "unacceptable" and complicate talks between world powers and the Islamic regime over its nuclear program.

French government spokeswoman Najat Vallaud-Belkacem told reporters that Hollande's Cabinet discussed the Iran nuclear dossier just hours before negotiations between Iran and six world powers were set to resume in Geneva. She said, however, that France still hopes for a deal and its position has not changed in the talks.

Hollande was referring to comments attributed earlier to Ayatollah Ali Khamenei speaking to a gathering of the Basij force, which is controlled by Iran's powerful Revolutionary Guard. In them, the Iranian leader referred to Israel — "the Zionist regime" — as "the rabid dog of the region."