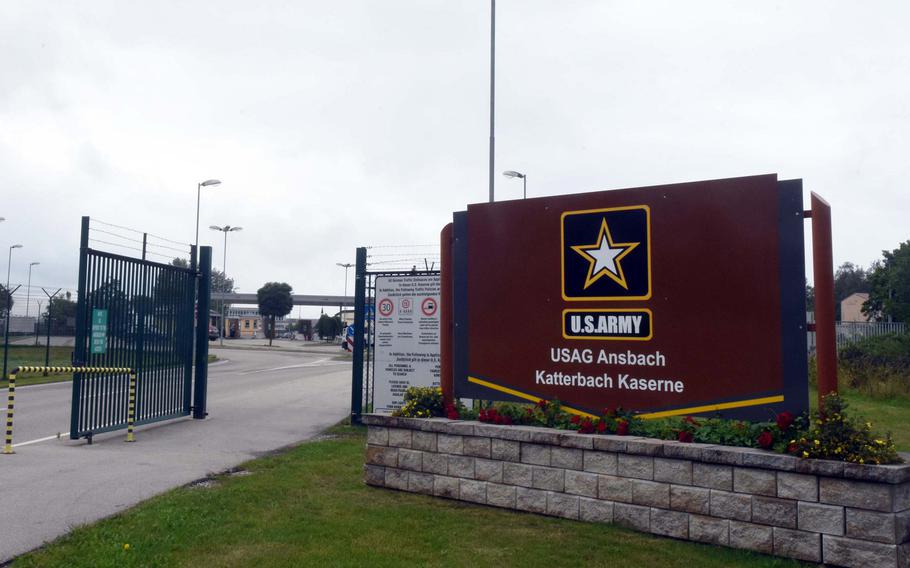 Katterbach Kaserne is part of the U.S. Army Garrison Ansbach. A report published in April 2020 by Ansbach city officials shows heavy contamination with toxic chemicals called PFAS in groundwater and soil near the firefighting training site at the base. (Stars and Stripes)

Katterbach Kaserne is part of the U.S. Army Garrison Ansbach. A report published in April 2020 by Ansbach city officials shows heavy contamination with toxic chemicals called PFAS in groundwater and soil near the firefighting training site at the base. (Stars and Stripes) 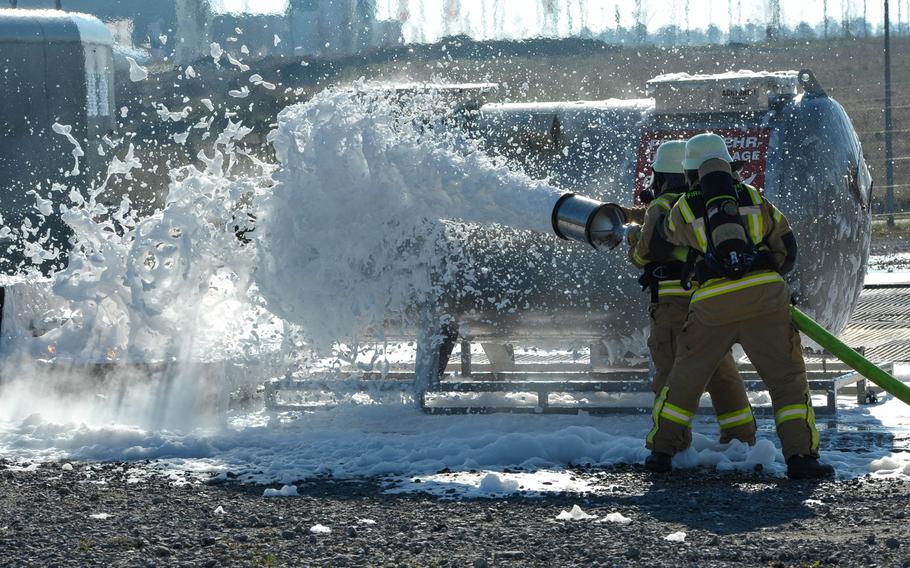 KAISERSLAUTERN, Germany — Toxic chemicals known as PFAS are present in soil at disused firefighting training sites at Katterbach Kaserne in Bavaria at levels up to 225 times higher than what’s considered safe, a U.S. Army report published by German officials said.

Levels in groundwater near the same sites are also significantly elevated and could pose a health threat if no action is taken to prevent the pollutants from seeping into water sources, such as wells, that supply drinking water to some neighborhoods near the base, said the report, which the Army commissioned to determine how to remediate the problem.

But the risk to people, including some 8,400 Americans who live on Katterbach or nearby, suffering from the health impacts caused by PFAS, including an increased risk for cancer and birth defects, was low, base spokeswoman Dani Johnson said, citing the report.

Contaminated soil was found “only inside the airfield fence in the vicinity of the former fire training pit,” and the base’s drinking water comes from the city of Ansbach, not from wells, Johnson said. An analysis in November found Ansbach’s water to be well within Bavarian safety levels.

The polluted sites are around a quarter of a mile away from base housing and around 700 feet from the elementary school playground, but neither is “routinely transited” and one of the training areas was paved over in the 1980s, she said.

Fine particles of PFAS have been found in topsoil and on grass at the sites, according to the report. But grass samples “taken between the school/housing area and the airfield did not detect any PFAS,” Johnson said.

A risk assessment conducted at the sites found that “the risk of direct human exposure to the PFAS contaminants via ingestion or inhalation and associated adverse health effects is very low,” Johnson said.

Particles found at the sites could, however, contaminate farms if they are picked up and carried by the wind or drafts created by helicopters, the report warned. But the risk of the chemicals spreading to farmland was low and the base has a plan in place, including regular lawnmowing and controlled burns, to minimize the risk of contamination, it said.

PFAS, or per- and polyfluoroalkyl substances, make firefighting foams more effective at extinguishing fuel fires, the Defense Department said on its website. They were added to the foams after a blaze tore through the aircraft carrier USS Forrestal in 1967, killing more than 130 sailors and nearly destroying the ship, it said.

In the decades since then, PFAS-containing foams have been found to be a major source of contamination at military bases where firefighting training occurs, the Environmental Protection Agency said.

A Pentagon task force has been working since July to find ways to eliminate use of PFAS, better understand their impact and fulfill the DOD’s cleanup responsibilities, deputy assistant secretary of defense for environment Maureen Sullivan told a congressional hearing earlier this year.

The estimated cost of remediation at Katterbach has been blacked out in the report, but the Pentagon has said the price tag to tackle PFAS pollution on hundreds of bases around the world will be at least $3 billion.

Unspecified sums have been made available for the Army to fix the contamination problem at Katterbach, officials said in August when a previous report was released. That study failed to meet Army standards, in part because it did not recommend remediation methods, Johnson said.

A “technically robust” report that proposed several fixes was submitted to the Army in December, Johnson said. A German version was sent to officials in Ansbach and Bavaria, and the English original was sent to the Army Environmental Command in Texas, she said.

The AEC will award a remediation contract after it finishes reviewing the report, Johnson said.

Ansbach posted the report on its website earlier this month. The city said it was obligated by Bavaria’s Environment Information Act to publish the report after the Army missed a March 31 publication deadline, city spokeswoman Anne Ziegler said.

The Army let the German deadline pass, in part because it considered discussing remediation publicly to be outside its authority, Johnson said.

Ansbach politician Boris-Andre Meyer of Die Linke, a leftist party opposed to the U.S. military presence in Germany, said because the Army has been slow to take action, “The poison has contaminated Ansbach’s waters and soil … [and] we are confronted with a huge remediation problem.”

But the Army, which launched investigations into PFAS at Katterbach in 2017, continues to take the problem very seriously, Johnson said.

“We live in these communities; this is our home,” she said. “The U.S. Army ... is determined to be good neighbors and stewards of the environment while accomplishing its mission to support NATO in deterring aggression from any potential adversary here in Europe.”

Actions are being taken to address PFAS contamination on bases around the world, including in Europe, an Army said in November.

Sometimes called “forever” chemicals because they take so long to break down in the environment, PFAS have been confirmed or are suspected at 678 military installations in the continental U.S., Alaska and Hawaii, according to an analysis of Defense Department data published this month by the nonprofit Environmental Working Group. That number does not include overseas bases, EWG spokesman Alex Formuzis said.