For most US personnel, holiday travel in Germany is either complicated or unlikely to happen 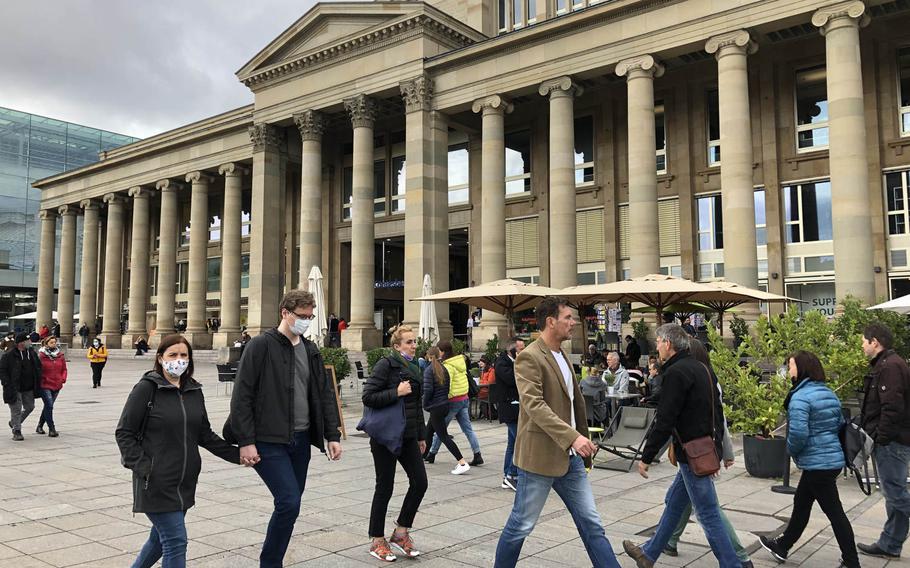 Buy Photo
People walk in downtown Stuttgart in October 2020, past the Koenigsbau mall on Schlossplatz. Americans with ties to the military living in Germany won't have many leisure travel options for the next month, either because of command decisions or laws meant to curb an ongoing spike in coronavirus infections. (John Vandiver/Stars and Stripes)

KAISERSLAUTERN, Germany — U.S. military personnel and their families living in Germany won’t have many travel options over the December holidays, either because of command decisions or the patchwork of state and local laws meant to curb an ongoing spike in coronavirus infections.

Chancellor Angela Merkel and leaders from the country’s 16 states agreed to close lodging for leisure travel through Jan. 10 during a meeting last week, but left open the possibility of briefly easing those restrictions around Christmas.

German officials have said they will allow gatherings of up to 10 people from Dec. 23 to Jan. 1, up from a maximum gathering of five, excluding children under 14.

Although a few states have announced they will open lodging for short stays, most either haven’t made decisions or have kept more stringent rules in place.

In Rheinland-Pfalz, home to about 50,000 Americans affiliated with the U.S. military at mainly Air Force and Army bases, state officials haven’t announced a decision on whether to ease travel restrictions.

Ramstein Air Base is continuing to discourage Air Force personnel from traveling for leisure outside of their local commuting area, “roughly defined as the general area a person lives, works and transits through on a regular basis,” Lt. Col. William Powell, 86th Airlift Wing spokesman, said Wednesday.

The wing’s policy is in line with the German federal government’s request to avoid unnecessary travel, Powell said.

In Bavaria, where about 40,000 Defense Department-affiliated people live, a law that went into effect Wednesday prohibits residents from leaving their home for nonessential reasons.

The Bavaria-headquartered 7th Army Training Command required movement outside the home to be “minimized to compelling reasons" in an order that went into effect Wednesday. Personnel may visit other homes in accordance with the national limit on gatherings. From Dec. 23 to Dec. 26, up to 10 people may gather in private.

A 9 a.m. to 5 p.m. curfew was to go into effect Wednesday night for the county that includes the Hohenfels training area, U.S. Army Garrison Bavaria said Wednesday.

Under the rule, leaving home during the curfew period is only permitted for a medical or veterinary emergency; official business or urgent training purposes; exercising parental custody and visitation rights; accompanying dying people; animal care; and participating in religious services between Dec. 24 and Dec. 26.

Hohenfels community members “are personally responsible for any fines resulting from infractions,” the garrison said on its Facebook page.

In Hesse, the state which hosts U.S. Army Europe’s Wiesbaden headquarters, traveling to visit family members will be allowed and people can stay overnight in a hotel, state Minister President Hesse Volker Bouffier said Thursday, as quoted by news site t-online.de. It was unclear how many days stays would be allowed as of Wednesday.

Mecklenburg-Vorpommern and Lower Saxony in the east, North-Rhine Westphalia in the west and Schleswig-Holstein, bordering Denmark, also allow family member visits and stays in hotels or comparable accommodations from Dec. 23 to Jan. 1.

But while Mecklenburg-Vorpommern allows people to stay for three nights in lodging, Schleswig-Holstein only allows a two-night stay. North-Rhine Westphalia's website did not say how long it would allow stays.

The rules apply to hotels, bed-and-breakfasts and vacation rentals such as those found on Airbnb.

Additionally, several districts and cities have implemented more stringent rules than their states.

In neighboring countries, Switzerland’s ski slopes are open, but Germany considers the country a risk area, which requires anyone coming back to go into quarantine for 10 days.

Austria’s ski areas are also open but lodging is closed through Jan. 10, and a 10-day quarantine upon return to Germany is mandatory.

Germany is now regularly seeing 20,000 new coronavirus cases per day, well up from its spring peak of about 6,000 cases per day. The country is in what Merkel termed “lockdown light,” which has closed in-person dining at restaurants and shuttered entertainment facilities, among other restrictions.

All regulations are subject to change as German officials continue to meet over the next few weeks. The nation’s science academy has called for more stringent measures, and on Tuesday Merkel told parliament that she supports its recommendation to shut down most stores after Christmas.