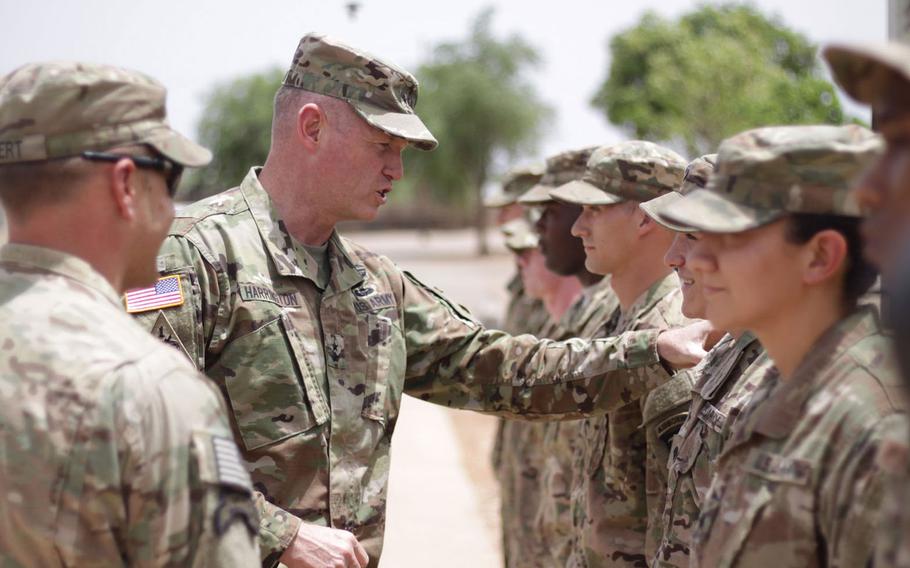 VICENZA, Italy — The former commander of U.S. Army Africa has been forced to retire for a flirtatious texting relationship with an enlisted man’s wife and will lose a star in the bargain.

Maj. Gen. Joseph Harrington will retire as a one-star, the last rank at which he served satisfactorily, according to a story in USA Today.

Harrington’s demotion came after an Inspector General investigation found that his exchanging more than 1,000 wide-ranging messages with the woman over several months — in which he called her a “hottie,” said he’d like to be in a tent with her and variously discussed the virtues of make-up sex, ice cream and religion — were not criminal.

Yet they “were not good examples of virtue and honor,” the newspaper quoted the report, “negatively impacted the command climate and readiness of the (Vicenza Military Community), were dissolute and immoral, and not an example of the exemplary conduct expected of an Army senior leader.”

“I made a mistake by responding to and entering into a private discussion with a soldier’s spouse,” Harrington wrote. “While we both considered it a friendship-based conversation, it is clear that the discussion should not have occurred. I hope others can learn from and avoid my mistake.”

Don Christensen, president of the advocacy group for military sexual assault and harassment victims, Protect Our Defenders, said that the result was just but that the IG’s analysis was flawed.

“Because the relationship never went past messaging, the Army’s response was appropriate,” said Christensen, formerly the Air Force’s top prosecutor. “However, the IG is 100 percent wrong to say Harrington’s conduct wasn’t criminal. It clearly was at minimum a violation of Article 133 of the UCMJ. And it may be news to the IG, but violations of the UCMJ are crimes.”

The Vicenza woman involved said she had conflicting feelings about the end of Harrington’s career. As a soldier’s wife, she said, the outcome seemed fair.

“I think it’s correct,” she said. She said she’d known of cases where lower-ranking soldiers were more severely punished for less serious misconduct.

“But as a civilian woman from a foreign country, I think it’s a lot,” she said. “In Italy, that would never happen.”

She described the texting relationship as friendly at first, followed by teasing and oblique sexual references.

“He gave good advice and he was my friend,” she said, and she confided in him. Still, she said she felt “a little bit scared” that if she didn’t go along, when he’d text something flirtatious — that he’d just showered and was in bed, for example — she might anger him.

In the end, Harrington abruptly stopped texting her, brushed off her questions why and suggested that she had imagined their friendship, texts on her phone show. She told her husband, and they reported it.

“All I wanted was to be respected and he disrespected me,” she said.

Harrington was suspended from command in September after the IG began its investigation.