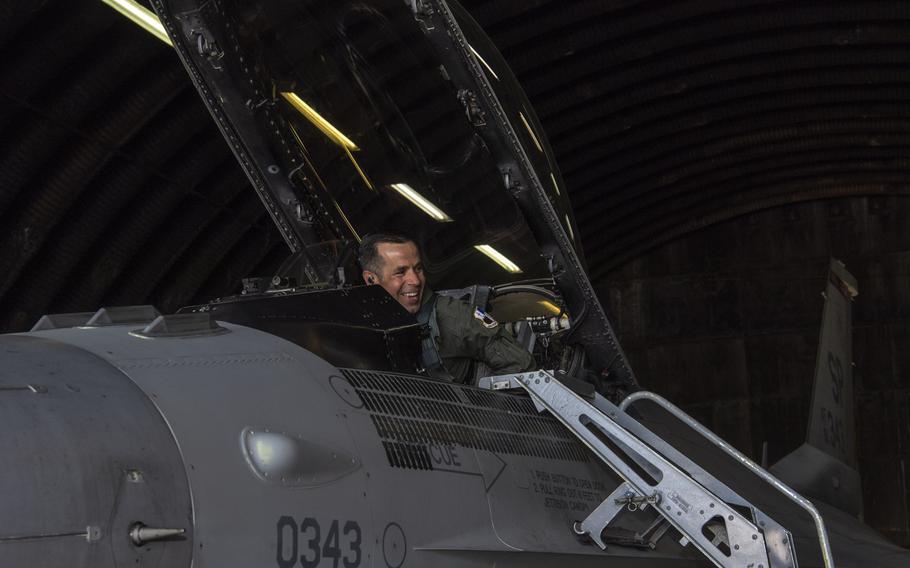 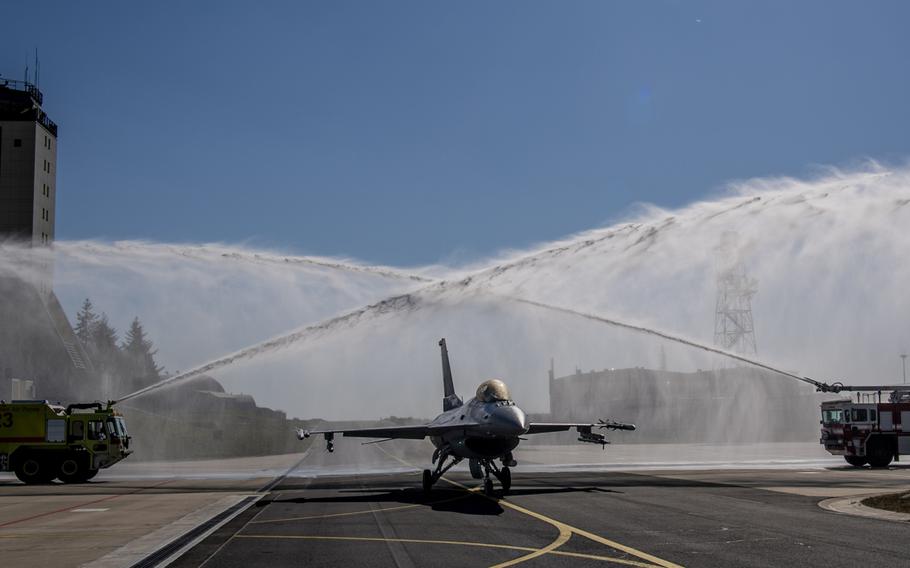 An F-16 Fighting Falcon assigned to the 52nd Fighter Wing at Spangdahlem Air Base, Germany, is given a water salute on Thursday, April 23, 2020, after completing 10,000 flight hours. The F-16 was the first in Europe, and only the second in the U.S. Air Force's inventory, to cross the 10,000 flight-hour mark. (Kyle Cope/U.S. Air Force) 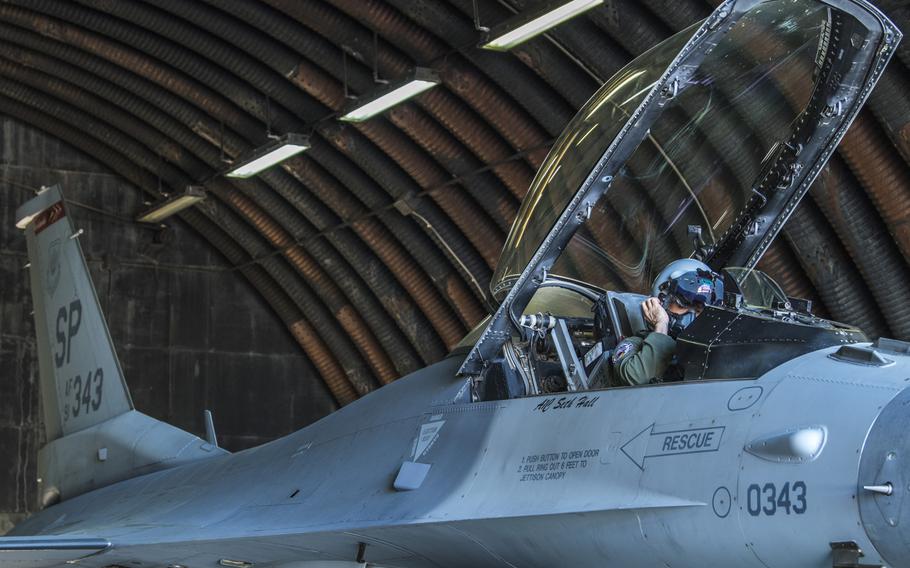 An F-16 combat jet at Spangdahlem Air Base achieved a landmark 10,000 flight hours on Thursday, nearly 27 years after it rolled off the production line and began flying for the 52nd Fighter Wing.

The aircraft – Tail No. 343 – is the first Block 50 Fighting Falcon in Europe and only the second F-16 in the U.S. Air Force’s inventory to reach the historic milestone, something maintainers hailed as a testament to its durability and their dedicated labor.

An F-16 at Misawa Air Base in northern Japan hit the mark a year ago, but that jet was delivered a year earlier than Spangdahlem’s, maintainers said. It also took 26 years and 11 months to reach 10,000 hours – two months longer than No. 343.

“It takes a lot of work and a lot of diligence and a lot of very thorough inspections to keep (the aircraft) safe and ready to fly,” said Senior Master Sgt. Andrew Yates of the 480th Aircraft Maintenance Unit at Spangdahlem.

“The plane’s been flying since before about 75% of the people in this building were even born – definitely before any of us even joined the military,” he said.

Both are true for 1st Lt. Christina Nunley, 25, the assistant officer in charge for the 480th AMU.

“This aircraft has been at Spangdahlem longer than I have been alive,” she said. “Obviously, there are struggles that come with having an older aircraft, but the history behind it is a huge motivating factor and it’s something that we take a lot of pride in.”

Chief Master Sgt. Chris Yager, 45, is part of that history. His first assignment out of tech school in 1997 was at Spangdahlem, where he worked on the jet and saw it reach 2,000 flight hours.

Back then, “there were those old crusty guys that were out there training me how to work on aircraft and sometimes I wondered why they were training me the way they were,” said Yager, the 52nd Maintenance Group superintendent.

With Thursday’s milestone, Yager said he sees “the fruits of that labor.”

Keeping No. 343 airworthy involved about 190,000 hours of work by ground crews, maintainers said. The F-16 on average requires 19 hours of maintenance for every hour of flying time – a figure that includes thorough inspections, refueling and basic maintenance such as changing tires and oil.

The wing’s vice commander, Col. Jason Hokaj, took the jet up Thursday afternoon for less than an hour to reached the milestone. Base firefighters hosed down the aircraft as it taxied down the flightline after landing.

“This is such an amazing event to be part of,” Hokaj said in a statement. “To think about the amount of hands and minds used to get here, to keep this machine flying, it’s a testament to the professionalism of the 52nd Maintenance Group.”

The Lockheed Martin Block 50 F-16s that the 480th Fighter Squadron flies were initially designed to last 8,000 flight hours, Yates said. But a series of upgrades has kept many of them going past that mark, he said.

Yager likened the F-16 to the Air Force’s Cold War-era B-52 bomber, which is still in service after more than 50 years.

“It was only designed for so many hours but it keeps going and going,” he said.

Lockheed Martin’s F-35A Lightning II is the planned replacement for the F-16 across the service, but due to delays in the program, the F-16s are expected to receive service-life extension upgrades to keep them airworthy until 2048 and beyond.

No. 343 was part of the 480th’s deployment for Operation Inherent Resolve to Iraq and Syria in 2016, when the squadron broke a record for number of munitions dropped by an F-16 unit within a six-month period.

“It’s just been a good, durable aircraft,” Yates said. “There’s a lot of superstition in the maintenance community – rubbing the bellies and certain things – but really, the biggest reason is … making sure all the required inspections for this aircraft are complied with.”