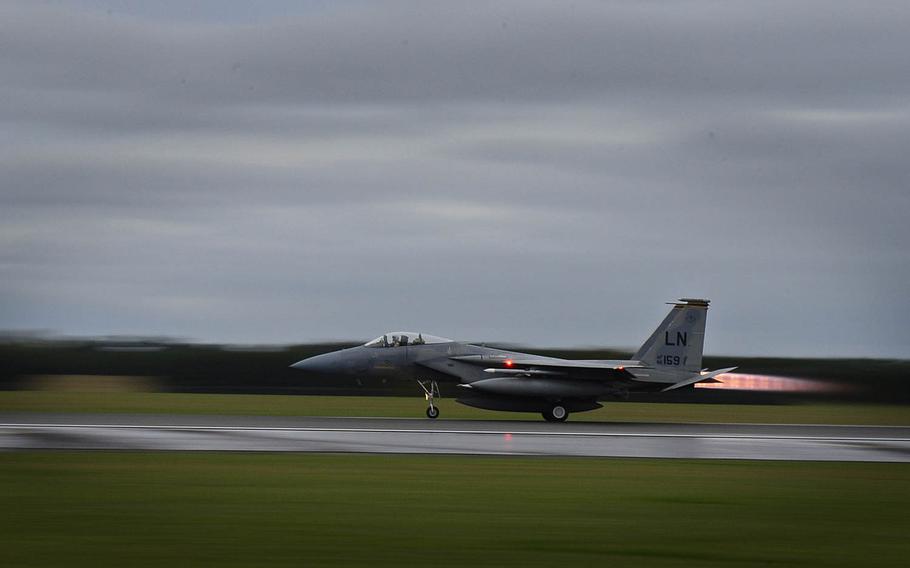 Six F-15Cs, based out of RAF Lakenheath in the United Kingdom, are in place at Incirlik Air Base, the strategic hub in southern Turkey that has emerged as a key launching point for airstrikes in neighboring Syria, U.S. European Command announced. However, the main mission for the F-15Cs will be guarding Turkish airspace, which Russian fighters violated on multiple occasions in October, EUCOM said.

“These aircraft will conduct combat air patrols in Turkish airspace,” EUCOM said in a release. “This deployment of additional aircraft to Incirlik is in response to the government of Turkey’s request for support in securing the sovereignty of Turkish airspace.”

Last week, the Obama administration announced it would deploy about 12 F-15s to Turkey. The remaining six aircraft, likely to be F-15Es used mainly for ground strikes, also are expected to arrive soon at Incirlik.

The introduction of the F-15s is another sign that the military campaign against the Islamic State continues to ramp up.

While the F-15E is used for striking ground targets, the F-15C is designed exclusively for aerial combat, which means its main job is to fight and guard against opposing aircraft.

“The Islamic State does not have an air force, nor do any of the other non-state entities fighting in Syria, and the Syrian air force has shown no intent at all to engage U.S. aircraft,” said Dakota Wood, a security expert with the Heritage Foundation in Washington. “So the only plausible reason for adding F-15Cs to U.S. capabilities is to respond to Russia’s deployment of combat aircraft in support of Syrian combat operations.”

The decision to deploy the F-15C, which in addition to guarding Turkish airspace also is capable of protecting other U.S. aircraft operating in the region, signals the U.S. has assessed there is the potential for hostile actions against U.S. aircraft, according to experts.

“I’m not sure as to how Russia might react, but it appears that these F-15Cs are being deployed in response to Russia sending its Sukhoi Su-30SMs to Syria, which are mainly air defense fighters,” said Gareth Jennings, an aviation expert with defense publication IHS Jane’s, who added some Su-30SMs have recently been pictured carrying bombs.

For the U.S., Incirlik Air Base has developed into a key hub for Inherent Resolve, the campaign against the Islamic State group in Syria and Iraq that began more than a year ago. After months of resisting U.S. efforts to conduct operations from the strategic base, Turkey agreed in July to allow combat operations from Incirlik, which has shortened flight times for U.S. aircraft. Since then, U.S. fighters and drones have been a steady presence.

In late October, about a dozen A-10 Thunderbolt II attack planes deployed to Incirlik. The A-10s, known for their ground assault capabilities, replaced six F-16s that were previously carrying out that mission from the Turkish base.

In recent days, the A-10s provided key air support to rebel fighters in an operation that resulted in pushing Islamic State fighters out of the Syrian town of al Hawl near the Iraq border, reclaiming about 255 square kilometers of ground from the militants, Army Col. Steve Warren, a spokesman for the U.S.-led Operation Inherent Resolve, told reporters on Wednesday.

That offensive was part of a broader push by the Obama administration to intensify operations against the Islamic State, which will include an on-the-ground U.S. military presence in Syria with about 50 U.S. special operations troops to be deployed to the country.

At the same time, Russia has been carrying out strikes of its own, hitting both Islamic State targets as well as forces opposed to the regime of Moscow ally Syrian President Bashar Assad.

While the U.S. has been critical of Moscow’s backing of Assad and Russia’s on-going military operation in Syria, there are increased signs that U.S. and Russian military forces are working to avoid direct confrontation.

On Tuesday, U.S. and Russian aircraft intentionally flew within close proximity to each other over Syria to test communications. The pre-planned test over south central Syria was part of an effort to ensure the effectiveness of communication guidelines established in the flight safety agreement announced Oct. 20.

However, as more U.S. aircraft maneuver above Syria, Russia could at some point take a more aggressive posture to test how the U.S. might respond, some experts say.

“In such situations, there is always increased potential for miscalculation, misinterpretation, or over-reaction than can lead to unintended conflict. This is a feature of interactions between powers and carries risk,” Wood said.

“The U.S. and Turkey, as NATO allies, share a commitment to peace and stability in the region,” EUCOM stated.