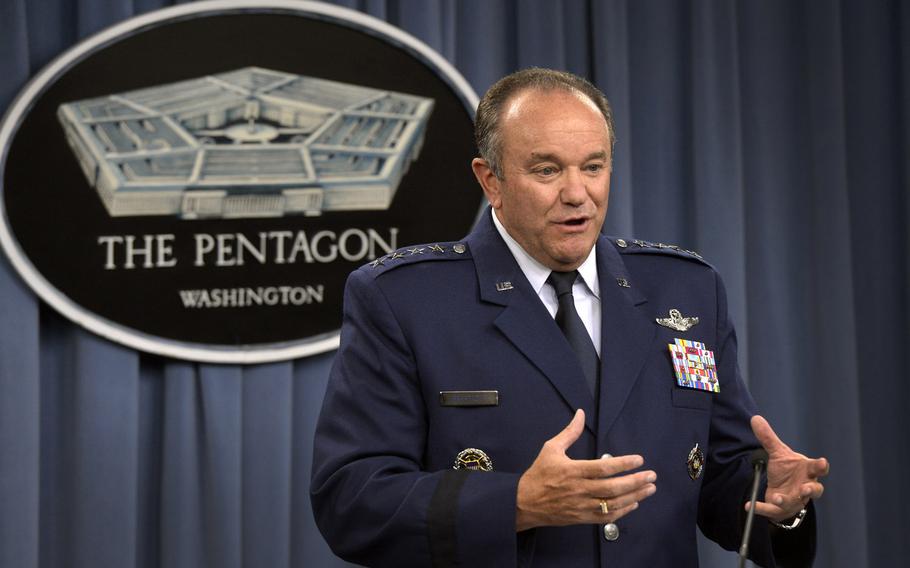 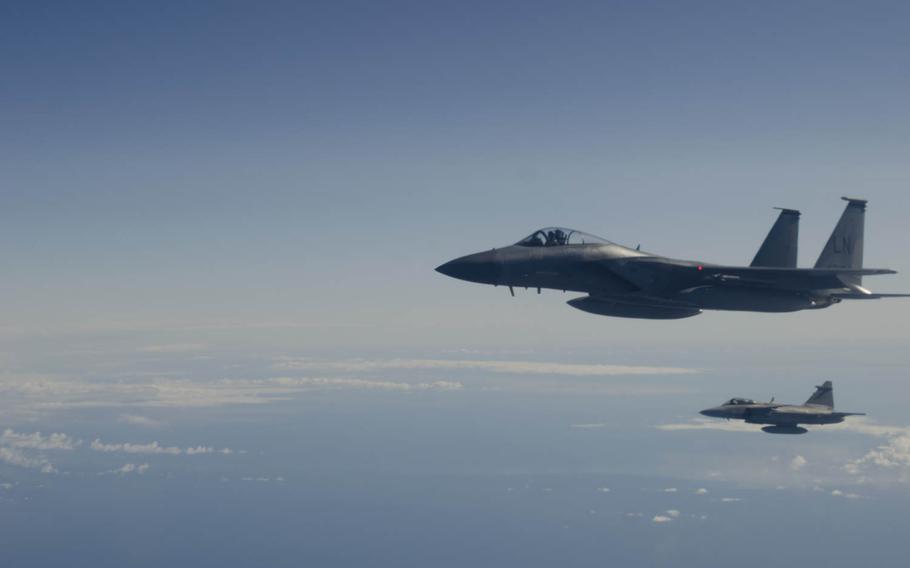 An F-15C Eagle and a Swedish JAS-39 Gripen Fighter fly in formation during a training event over the Baltic Sea on Tuesday, April 1, 2014. Airmen and F-15Cs from RAF Lakenheath, England, deployed to Lithuania in early January to assume the Baltic Air Policing mission. (Adam L. Mathis/Stars and Stripes)

WASHINGTON — The size of the F-15 fleet in Europe will shrink in the coming years, according to the head of U.S. forces in Europe.

At a news conference at the Pentagon on Monday, Gen. Philip Breedlove, commander of U.S. European Command and Supreme Allied Commander Europe, was asked about the results of the Defense Department’s European Infrastructure Consolidation review.

“I have seen some of the preliminary plans or results … and we’re looking at at least reductions of our F-15s force in Europe,” he said.

In Europe, there are 21 F-15Cs assigned to RAF Lakenheath, England, with the 493rd Fighter Squadron. Breedlove did not say how many might be moved elsewhere.

In March, Air Force officials said the service wants to retire 51 F-15C Eagles, including 21 overseas, starting in fiscal 2015. The reductions would be made over the next five years, leaving the Air Force with 179 F-15Cs, according to Ann Stefanik, an Air Force spokeswoman at the Pentagon.

Breedlove said the EIC review will be completed “relatively soon.” The initiative is part of an ongoing effort to get rid of unneeded facilities in Europe.

The upcoming F-15 cuts are one element of a broader Air Force plan to trim its force structure in the face of budget constraints.

At the briefing, Breedlove warned against continuing to reduce the U.S. military presence in Europe.

“I believe our force levels in Europe are about right, even absent the latest developments [involving Russian military moves] in Ukraine, and that we should take a knee and make no permanent reductions to our existing force structure. In fact, we may need to add additional rotational forces to cover the sustained, persistent presence that we are now envisioning,” Breedlove said.

He said there are “seven-plus” Russian battalion task groups on the Russian side of the border, plus “numerous small special operations forces.”

The Russians are providing advanced training and heavy weapons to the rebels, Breedlove said.

Breedlove was asked whether Russian-supplied anti-aircraft weapons had been used by the rebels to shoot down a Ukrainian military transport plane and helicopter in recent weeks. Dozens of Ukrainian soldiers were killed in the attacks.

“It’s a very good likelihood, but we haven’t tied the strings directly together yet,” Breedlove said.

Breedlove could not confirm reports that the rebels have man-portable air defense systems, which are essentially shoulder-fired missiles. He said he has not seen evidence of Russian forces training Ukrainian separatists on the use of MANPADS. But the Russians have taught the rebels to use anti-aircraft weapons mounted on vehicles, according to Breedlove.

The government in Kiev and the international community have been trying to get Russia to pressure the rebels to abide by a cease fire. But Breedlove sees no sign of that happening.

“What I would do is allow the actions on the ground to speak for themselves,” he said. “There is good rhetoric, there are some good words about a cease-fire and peace. But what we see is continued conflict, continued support of the conflict from the east side of the border. And until we see those things turn around, I think we need to watch with a wary eye.”