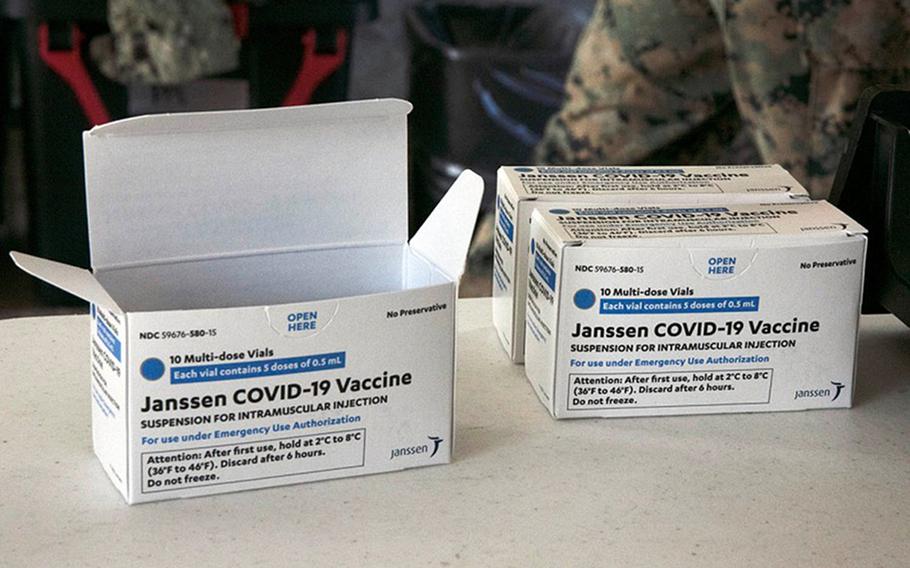 Vials of the one-shot Johnson & Johnson coronavirus vaccine at Naval Hospital Okinawa, Tuesday, April 13, 2021. The Pentagon has suspended use of the vaccine amid reports that it may cause rare blood clots. (MATTHEW M. BURKE/STARS AND STRIPES)

Vials of the one-shot Johnson & Johnson coronavirus vaccine at Naval Hospital Okinawa, Tuesday, April 13, 2021. The Pentagon has suspended use of the vaccine amid reports that it may cause rare blood clots. (MATTHEW M. BURKE/STARS AND STRIPES) 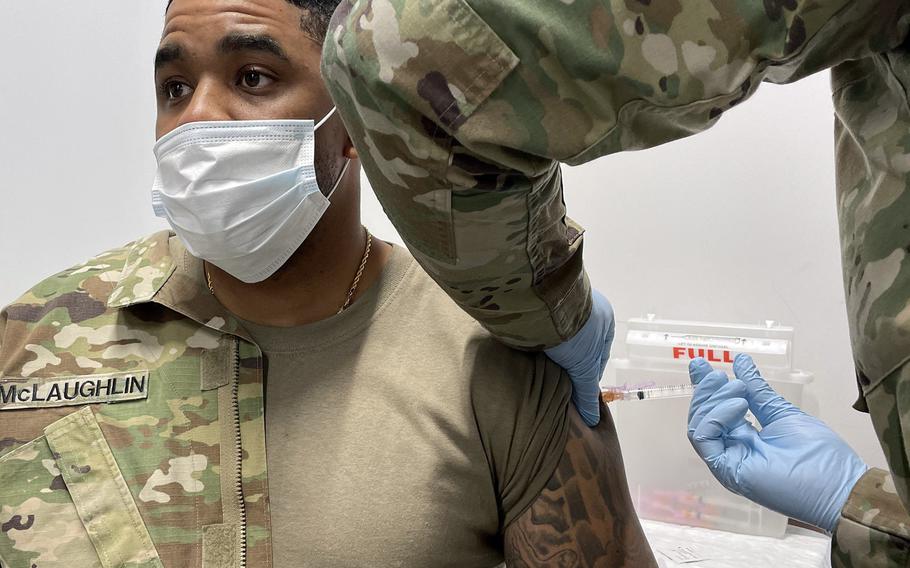 KAISERSLAUTERN, Germany — The military’s already slow rollout of the coronavirus vaccine in Europe looked likely to stall Wednesday after the Pentagon suspended use of the single-dose Johnson & Johnson vaccine amid reports that it may cause rare blood clots.

Army health clinics in Europe were expecting 30,000 doses to arrive over the next three weeks, half of them the Johnson & Johnson vaccine, said Gino Mattorano, a spokesman for Regional Health Command Europe.

“We won’t be administering any more Janssen vaccine until we receive more guidance on how to proceed,” Mattorano said Tuesday, using the name of J&J’s pharmaceutical companies, which developed the vaccine. He said it’s too early to say how the vaccine shipments will be affected.

The Food and Drug Administration and the U.S. Centers for Disease Control and Prevention on Tuesday recommended a pause in the use of the Janssen vaccine while they investigate six cases of blood clots that occurred in the U.S. in people who had had the shot.

All six cases occurred in women between the ages of 18 and 48, and symptoms occurred 6 to 13 days after vaccination, the two health agencies said in a joint statement. With more than 6.8 million Johnson & Johnson shots administered in the United States, the adverse effect is extremely rare, it said.

The health authorities’ announcement came hours after Army and Air Force officials said they expected an uptick in vaccine shipments to European medical clinics in the next few weeks.

The Air Force said they were expecting at least 7,500 doses of the Moderna and Johnson & Johnson vaccines per week over the next three weeks, about twice the usual amount, said 2nd Lt. Charis Bryan, a spokeswoman for U.S. Air Forces in Europe — Air Forces Africa.

About 15% of the shipment was expected to be the J&J vaccine, Bryan said. Those vials were set to be distributed to remote locations where administering two doses over time is challenging, she said.

Planners at the Defense Health Agency are working “to mitigate any impacts” of not having the Johnson & Johnson vaccine available, she said.

The U.S. Navy hospital in Rota, Spain, said on Facebook it was pausing use of the Johnson & Johnson shot but was “receiving additional Moderna vaccines, and will offer them to all eligible U.S. DOD Healthcare Beneficiaries on Friday, April 16.”

U.S. Naval Hospital Naples was also suspending the use of the Janssen shot, pending the FDA’s review, it said, but the Moderna shot is still available for people ages 18 and older.

The Army health clinic at Vicenza, in northern Italy, said it was also opening appointments to eligible people aged 18 and up.

The FDA and CDC have said that anyone who has had the Janssen shot and develops a severe headache, abdominal pain, leg pain or shortness of breath within three weeks of vaccination should contact their health care provider.

But the two health agencies and military hospitals stress that getting a blood clot after having the shot was “extremely rare” — about one in a million, Rota said.

Some 143,000 adults who are eligible for the vaccine have yet to get a shot at Army and Air Force bases in Europe, officials said this week. That includes service members, family members, civilians, some contractors and others who are treated at base medical facilities.

At Ramstein Air Base, where more than 7,000 doses of the vaccine have been administered since January, several thousand individuals in the high-risk and essential personnel category have not been offered a first dose of the vaccine, Air Force Col. Ryan Mihata, the 86th Medical Commander, said this week.

Ramstein plans to expand eligibility for coronavirus shots to everyone starting April 19, in line with White House and DOD guidance, Mihata said.

President Joe Biden announced last week that all American adults will be eligible for the vaccine by April 19, and around 40% of military vaccination sites in the U.S. are offering shots to younger, healthier people, defense officials said last week.