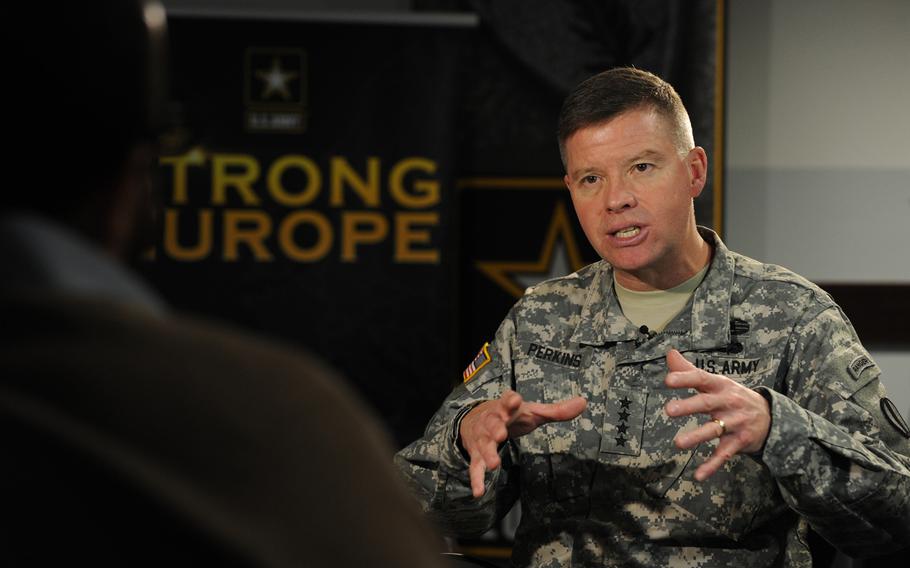 STUTTGART, Germany — If the Army’s new operating concept is about preparing to fight in an increasingly complex security environment, forces in Europe are in some ways on the leading edge, said the Army’s top general in charge of training.

“In many ways, what’s going on here in U.S. Army Europe is really leading the force, from an Army point of view,” said Gen. David Perkins, commander of U.S. Army Training and Doctrine Command, during a visit to Germany on Monday. “They are dealing in a very complex world.”

In October, the Army issued an operational concept dubbed “Win in a Complex World,” which puts a premium on adapting to a range of unpredictable threats and working with allies to counter them.

“What we’re saying is, in the future, we see the rate of complexity increasing, which means the ability of our leaders to understand that complex world is going to be more about the leaders than any single piece of equipment,” Perkins said in a telephone interview from Wiesbaden, where he was at USAREUR headquarters to talk with leaders about the service’s new operational focus.

The unpredictable nature of global security is illustrated by Russia’s intervention last year in Ukraine, which caught the U.S. and its allies off guard and reawakened long dormant Cold War fears about the potential for conflict in Europe.

The Army has responded to the crisis in Ukraine by refocusing forces on missions in eastern European countries on Russia’s periphery, where allies in the Baltics and Poland have been unnerved by Russia’s actions. Perkins said those efforts will pay dividends both strategically and in leader development for the Army.

“We have very junior leaders out there doing it, not only representing the Army, but representing the nation. They have to be well versed on the geopolitical situation. They have to interface with heads of state, ambassadors,” Perkins said. “We’re now going to have a whole generation of leaders that have to deal with the complexity of deploying and operating in a multinational environment.”

In Europe, the Army is boosting its presence after years of cutbacks. However, the modest surge in presence is in the form of rotational forces rather than increasing the number of those permanently stationed at garrisons on the Continent. Regionally connecting certain U.S.-based Army units to Europe is ensuring young soldiers and officers get exposed to a range of security challenges, Perkins said.

The Army presence also helps send a message both to allies and potential adversaries, the general said.

“If there are U.S. Army forces on the ground, that shows a huge level of commitment,” Perkins said. “Just having boots on the ground of American soldiers in a country that may have a security threat is a huge deterrent. … It gives us the ability to assure our allies and deter aggression.”

The Army’s new operational concept comes at a time when budget pressures are forcing deep cuts to the service’s end strength, which could dip as low as 420,000 if lawmakers don’t put an end to automatic budget cuts known as sequestration.

“A lot of people ask me if you can afford to put out a new [Army operational] concept because of budget constraints, and I say we can’t afford not to,” Perkins said. “If there is ever a time when you need to have priorities and vision, it is when you have constrained resources.”