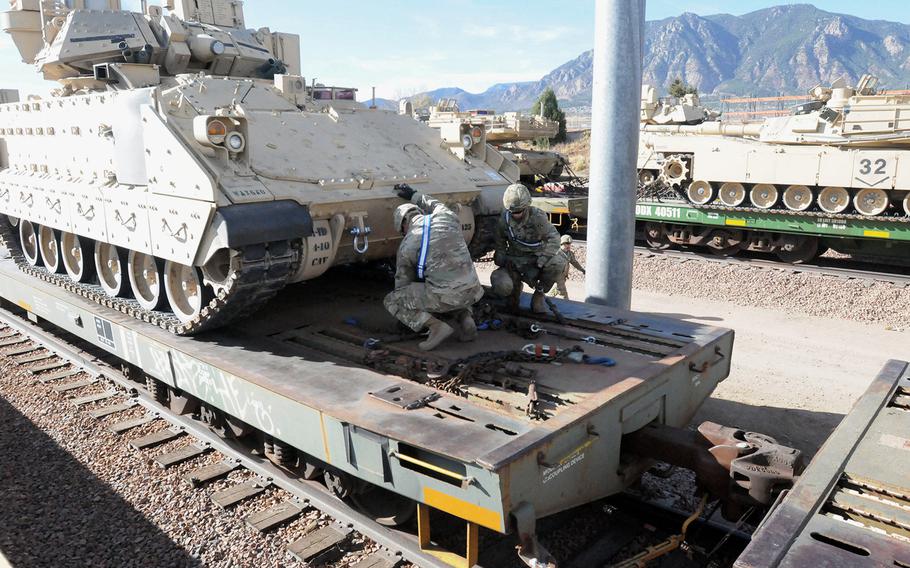 The movement of a whole U.S.-based tank brigade to Europe for a nine-month rotation, the first of several major troop rotations slated in the coming year, marks one of the largest logistical efforts on the Continent since the end of the Cold War.

“The whole logistics enterprise is looking at this as a great opportunity to test our systems, test the network itself and be sure we can answer the call if need be to bring what we call combat power to bear in the right place, at the right time,” said Col. Todd Bertulis, EUCOM’s deputy director of logistics.

In 2017, the Marine Corps is set to establish a new forward mission in Norway; Army cavalrymen are headed to Poland as part of NATO’s “enhanced presence” in the region; and the Fort Carson-based 3rd Armored Brigade, 4th Infantry Division, will be fanning out up and down eastern Europe. The linchpin to the campaign to showcase U.S. firepower — which is largely funded through the $3.4 billion European Reassurance Initiative — is the unglamorous business of the military’s logisticians.

For EUCOM and the Army in Europe, the arrival of the Fort Carson brigade in January, and its subsequent push into Poland, will be a test that will “help us measure, assess and then make any corrections we need to make,” Bertulis said.

As the tanks and artillery move across a commercial network, unloaded from ships docked at Bremerhaven, Germany, and then transported by rail and trucks, military planners will be looking for bottlenecks that slow the flow of equipment.

“They will be on the clock,” USAREUR Lt. Gen. Ben Hodges recently said. “How fast can we get them from Bremerhaven to assembly areas in western Poland?”

Overall, the flow of forces and gear into Europe means closer collaboration with NATO members, particularly as the alliance prepares to set up multinational battalions in the Baltics and Poland early next year.

The moves are in response to concerns over a more assertive Russia, whose 2014 intervention in Ukraine sparked fears in countries once dominated by the Soviet Union. Russia has denied any intention of invading a NATO state and blasted the alliance’s plans as a provocation. NATO has countered that its efforts are defensive in nature.

Navigating across commercial networks is now essential to carrying out the military mission in Europe. Unlike during the Cold War, when there were about 300,000 troops in Europe, many positioned in potential fighting positions, the military now has a relatively light presence. That means more reliance on rotational troops and commercial transit routes to get assets into position, even in an emerging crisis.

For the past year, the Army has been working to improve its grasp of the logistical map in Europe, with senior leaders conducting investigative “terrain walks” to identify shortcomings in the system. For example, while rail is a primary mode for moving heavy equipment around Europe, difficulties emerge as cargo moves into the Baltics, where the rail system still functions on Russian gauges. That means offloading onto different cargo trains, which require special transport cars.

The Army’s 21st Theater Sustainment Command has worked to set up a web of ports, river barges and air cargo hubs needed as part of the supply routes, which give commanders options in a crisis.

Hodges has spoken of the need to create a military “Schengen zone” — a reference to the free-travel arrangement among some European countries — that would simplify getting diplomatic clearance for moving equipment across NATO borders.

At EUCOM headquarters in Stuttgart, leaders are looking to coordinate Army efforts with the other services and allies and to put all the options on the table for commander Gen. Curtis M. Scaparrotti, who also serves as NATO’s top officer.

“Ensuring freedom of movement — we are really focused on that, the posturing of forces to allow decisions to be made,” Bertulis said.

“What’s interesting is all this coming to bear in one year, and it is really going to test us.”