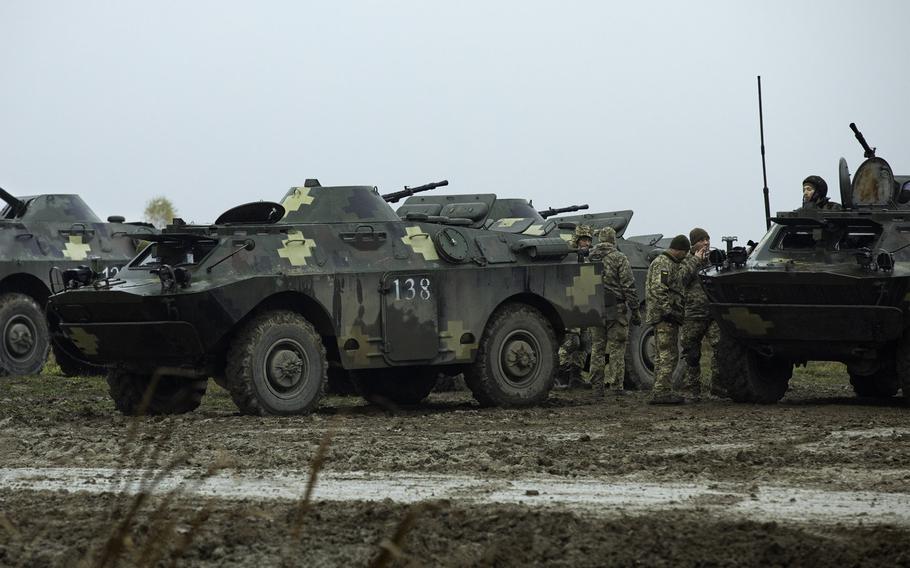 STUTTGART, Germany — U.S. European Command has raised its threat level over worries that Russia is massing forces around eastern Ukraine, where the Pentagon says tensions have escalated in recent weeks.

The situation in Ukraine prompted Joint Chiefs of Staff Chairman Gen. Mark Milley on the same day to connect with his counterparts in both Russia and Ukraine, in an attempt to de-escalate a situation that has prompted fears within Ukraine of a looming Russian offensive.

Gen. Tod Wolters in the past week raised EUCOM’s watch level for Ukraine from possible crisis to potential imminent crisis — the highest level, The New York Times reported Wednesday. EUCOM declined to comment on the threat level change, but said it is monitoring events in Ukraine carefully.

Kirby said changes in so-called “WATCHCON” levels express a “combatant commander’s concern about a potential threat and the ability to provide future warnings.”

“So by setting a WATCHCON, basically the commander is better able to identify and track the threat and alert decision makers to emerging concerns,” Kirby said, without discussing EUCOM’s current level.

Since Moscow’s 2014 military intervention in Ukraine, there have been steady clashes between Russian-backed separatists in the country’s east and government forces. On social media in recent weeks, scores of videos have shown Russian convoys of tanks and other combat vehicles apparently heading toward Ukraine.

Michael Kofman, a security analyst with expertise on Russia, said it isn’t clear what Moscow has planned.

“Regarding force movements around Ukraine. No strong evidence that an attack is imminent, but force movements are indicative that something is up outside of regular exercises, or normal troop rotation,” Kofman said in a Twitter post. “Russian intentions (are) unclear.”

Kirby did not offer an assessment on the apparent military buildup, but blamed Moscow for recent violations of a July 2020 cease-fire deal in Ukraine that resulted in the deaths of four Ukrainian soldiers last week.

Russia also has stepped up maneuvers beyond Ukraine in recent days.

On Monday, NATO fighter jets conducted 10 intercepts of Russian warplanes, stretching from the Arctic to southern Europe as the alliance countered what it called “an unusual peak” of flights. Allied aircraft shadowed Russian bombers and fighters over the North Atlantic, North Sea, Black Sea and Baltic Sea, NATO said.