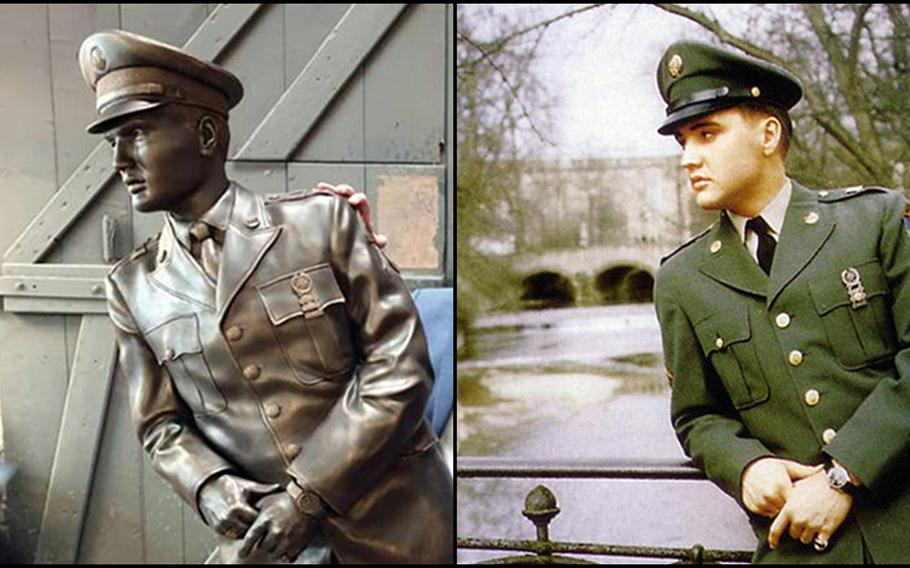 An Elvis statue and a photo of Elvis in 1959 are shown side-by-side.The leaning Elvis Presley statue is going to be placed on a city bridge in Bad Nauheim, Germany, mimicking a photo from the time the King was living there in the late 1950s. (City of Bad Nauheim)

An Elvis statue and a photo of Elvis in 1959 are shown side-by-side.The leaning Elvis Presley statue is going to be placed on a city bridge in Bad Nauheim, Germany, mimicking a photo from the time the King was living there in the late 1950s. (City of Bad Nauheim) 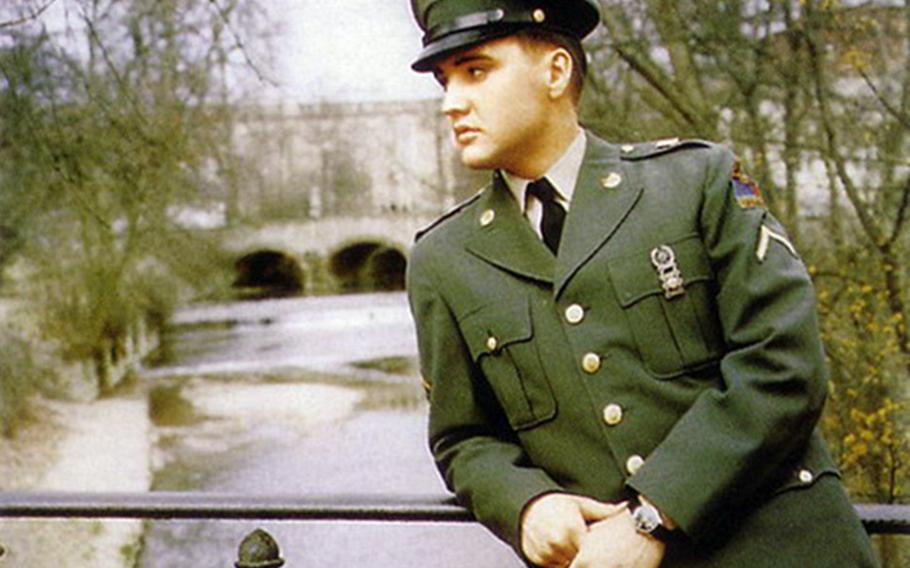 Elvis Presley poses on a bridge in Bad Nauheim, Germany in 1959, while serving in the Army. The city is placing a statue of Presley on the bridge later this year, standing in the same pose. (City of Bad Nauheim) 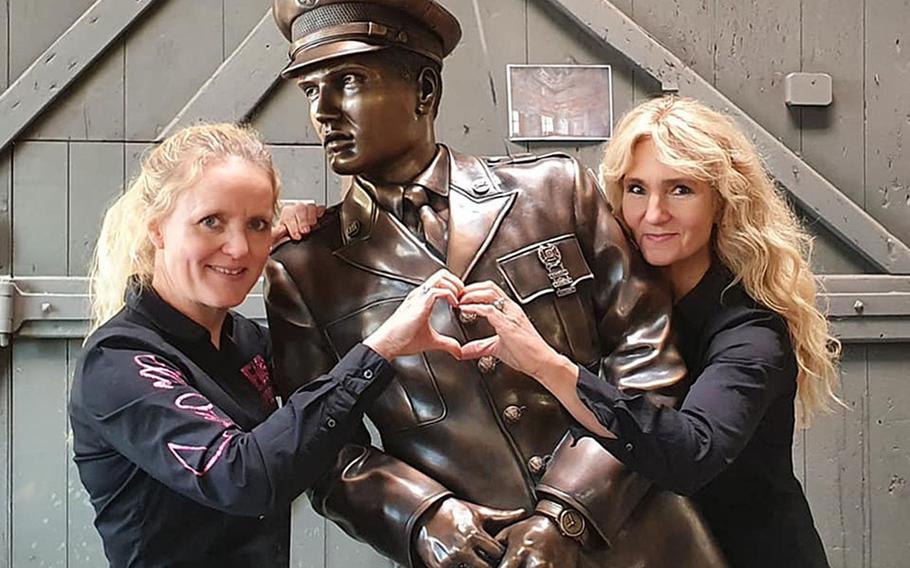 Meike Berger, left, and Angela Storm with the life-size bronze statue of Elvis Presley, in October 2020, at the Rincker foundry in Sinn, Germany. They initiated a GoFundMe page to raise money to produce the statue, modeled after a photo of Presley, that will be placed on a bridge in Bad Nauheim, Germany, where the King as a soldier in the late 1950s. (Facebook/Elvis in Bronce) 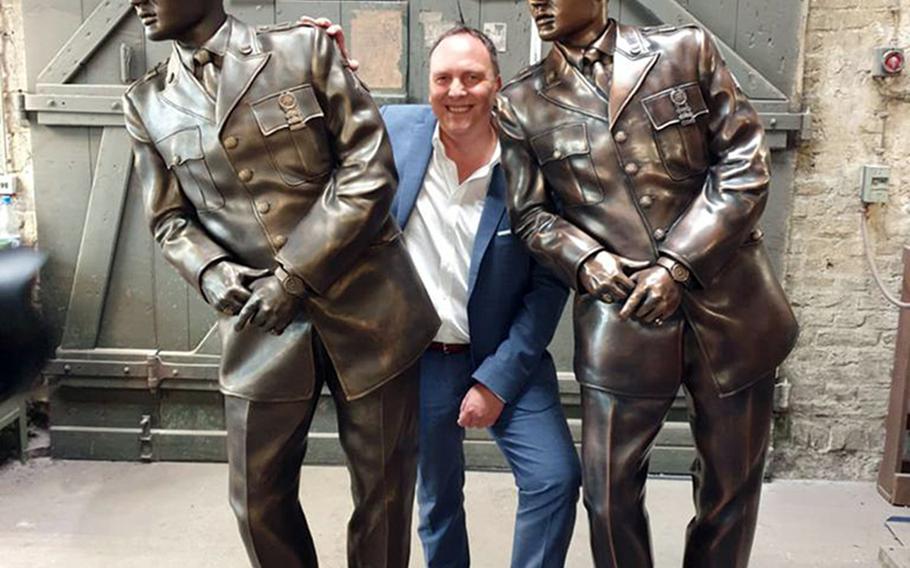 Bad Nauheim, Germany, Mayor Klaus Kress stands with the 3D model and the bronze statue of a leaning Elvis Presley that is going to be placed on a city bridge, mimicking a photo from the time the King was living there in the late 1950s. (City of Bad Nauheim) 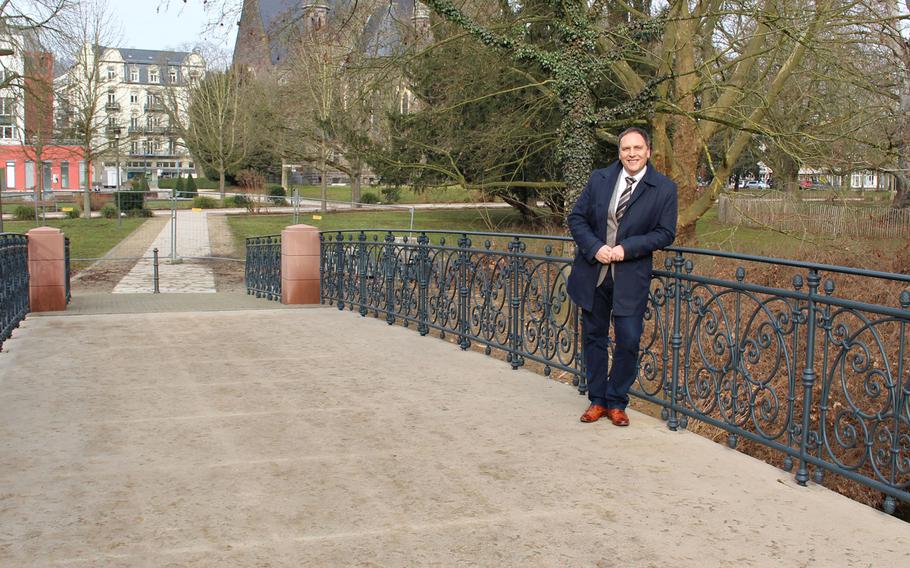 Bad Nauheim, Germany, Mayor Klaus Kress stands on a city bridge, where a statue of Elvis Presley is going to be installed later in 2021. Presley lived in Bad Nauheim while he was serving in the U.S. Army in nearby Friedberg. (City of Bad Nauheim) 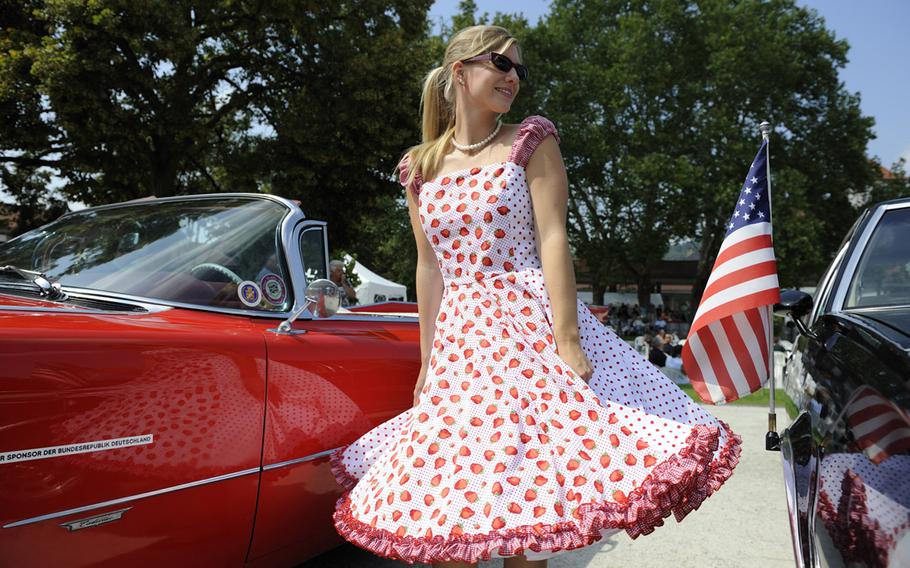 A person wearing a 1950s-style dress poses in front of a classic American car during the Elvis festival in Bad Nauheim, Germany, in 2010. The city plans to host the festival again this year, when a life-size bronze statue of Presley is to be installed on a city bridge. (Winfried Eberhardt/City of Bad Nauheim)

KAISERSLAUTERN, Germany — Elvis Presley is set to return to a German town where he lived in the late 1950s as a U.S. Army private, in the form of a nearly 6-foot-tall bronze statue.

The statue will be placed by August in Bad Nauheim on a pedestrian bridge spanning the aptly named Usa River, where Presley took part in a photo shoot in March 1959, town spokeswoman Linda Doengens said.

To prepare for the statue’s arrival, the bridge’s vertical, postwar railings were replaced with decorative wrought-iron ones similar to what was there when the pictures of Presley were taken, she said.

The statue will be on the bridge in time for Bad Nauheim’s annual Elvis festival, when the usually quiet spa town is transformed into what it describes on its website as “a sea of Cadillacs, petticoats and Elvis quiffs,” with rock ‘n’ roll as the soundtrack.

The celebration of the life and music of Bad Nauheim’s most famous former resident was canceled last year because of the coronavirus pandemic, but the 18th edition of the festival is scheduled for Aug. 13-15, health conditions permitting, the organizers have said. It’s always held around the anniversary of Presley’s death in Memphis, Tenn., on Aug. 16, 1977.

Two German fans of the King, Angela Storm and Meike Berger, raised more than $42,000 to pay for the statue, which was made based on a 3D rendering of the 1959 image of Presley on the bridge. The 440-pound statue has been cast by a foundry and was presented to the media last month. It will remain on the bridge after the August festival.

Presley was already a star when he received his draft notice from the Army in December 1957, with a string of hit records including “Heartbreak Hotel,” “Blue Suede Shoes” and “Hound Dog,” and a movie, “Love Me Tender.”

He received a deferment to allow him to finish work on the movie “King Creole” and reported on March 24, 1958.

After basic training at Fort Hood, Texas, he shipped out to Germany, where he spent 18 months serving in Company D, 32nd Tank Battalion, 3rd Armor Division, based in Friedberg.

He spent a few nights in an Army bunk in Building 3707 at Ray Barracks in Friedberg but then was allowed to live off base with his father, grandmother and some friends from Tennessee who followed him to Germany.

They lived briefly in a hotel in Bad Homburg and then in one in Bad Nauheim, which was closer to Friedberg. But they were told they would have to move out because King Saud of Saudi Arabia, who regularly visited the spa town for health care, had booked the entire building for himself and his entourage.

The statue coming to Bad Nauheim isn’t the only memorial to Presley in the region. The lights at a crosswalk in Friedberg flash images of Presley, and there’s a statue of him in a traffic circle across from where the main gate to Ray Barracks used to be.