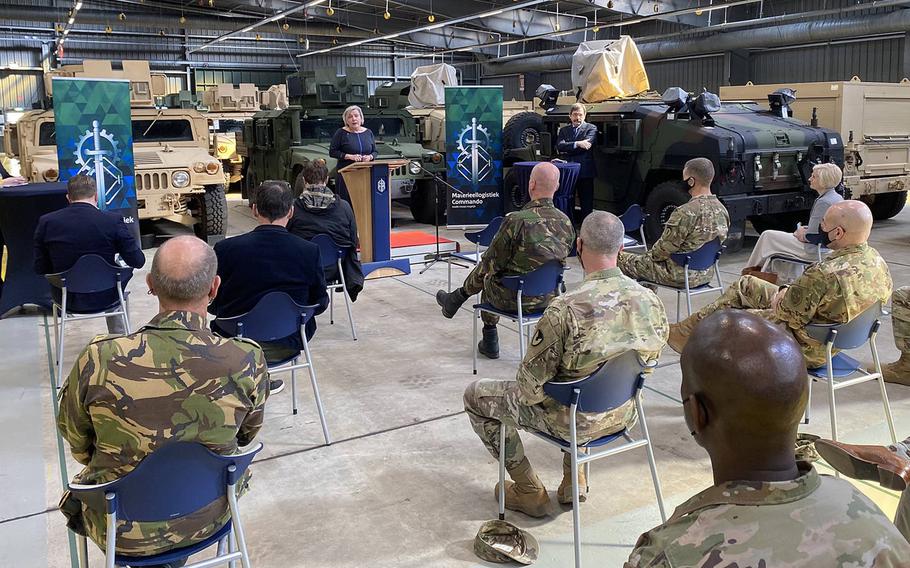 Dutch Defense Minister Ank Bijleveld delivers remarks at the 405th Army Field Support Brigade's Army Prepositioned Stock-2 site at Eygelshoven in the Netherlands on March 24, 2021. The Dutch government has agreed to spend more than $40 million on upgrades and new construction at the site, Bijleveld said. (Twitter/405thAFSB )

STUTTGART, Germany — The Netherlands will spend more than $40 million to expand a U.S. Army weapons depot in the country, where gear is pre-positioned for soldiers to draw from in a crisis, defense officials said.

“The planned improvements are necessary due to the fact that the U.S. wishes to expand and intensify its use of (the depot),” the Dutch Defense Ministry said in a statement Wednesday.

The funds will be used to renovate storage hangars at the site and improve infrastructure, including a rail connection adjacent to the site.

U.S. Army Europe and Africa has in recent years added numerous pre-positioned stock sites on the Continent. The pre-positioning program was developed as a way to add combat power that forces could quickly access in a crisis or during exercises, military officials said. Other stock locations are in Germany, Belgium, Italy and Poland.

During a visit Wednesday to the site, Dutch Defense Minister Ank Bijleveld said the expansion project “not only contributes to bilateral relations between the U.S. and the Netherlands, but also to trans-Atlantic and European security.”

Expanding Eygelshoven will “improve military mobility in Europe and contribute to deterrence,” Bijleveld said. “It gives further meaning to our role as ‘gateway to Europe,’ as transit and host nation.“

By next year, Army depots around Europe will house an Armored Brigade Combat Team’s-worth of equipment, as well as engineer, artillery, military police, logistical and medical capabilities, according to U.S. Army Europe and Africa.