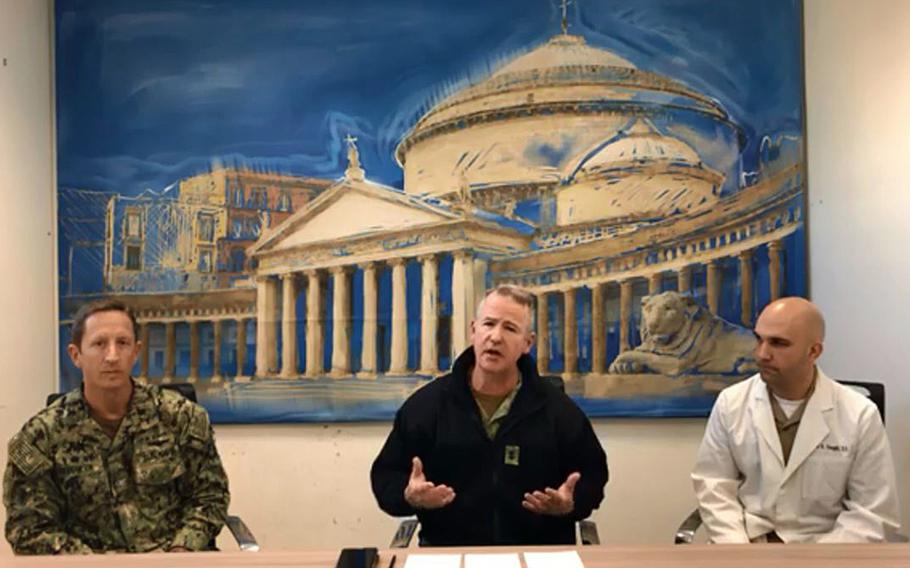 Read more coronavirus coverage from Stars and Stripes. VICENZA, Italy – Navy officials urged service members and their families in southern Italy to keep calm and carry on as usual Tuesday, even as the Italian government restricted movement throughout the entire country of 60 million people in the latest effort to stop the spread of the coronavirus.

Permanent changes of station would continue normally, at least for the time-being; commissaries were open for business; and although schools at Naval Support Activity Naples closed for the first time on Tuesday, Sigonella schools remained open, Navy officials said at a virtual town hall meeting.

Italy, in contrast, has banned weddings, funerals, sports, street fairs and other activities in an effort to contain the virus, which as of Monday had killed 463 people and been diagnosed in more than 9,100. Even mass has been canceled, and schools and universities were ordered to close on March 5, not to reopen until next month at the earliest.

Only people with a valid work or family reason that cannot be postponed will be allowed to travel, the government said. Police will be checking that travelers have official documents authorizing travel, and anyone found to have falsified an authorization or without one could face up to three months in jail or a fine of $225.

But for the U.S. Navy, it was a different picture. “We don’t have any directive to stop PCSing,” said Rear Adm. Matthew Zirkle, chief of staff for U.S. Naval Forces Europe, U.S. Navy Forces Africa and the 6th Fleet.

Approval for emergency leave or temporary duty travel would be given on a case-by-case basis and depends on circumstances, such as where someone plans to travel and for what purpose, Zirkle said.

“I don’t want to take those memories away from anyone,” Zirkle said. “My default is, I’m trying to get to yes.”

NSA Naples commander Capt. Todd Abrahamson said service members and their families should “keep shopping at your normal levels” in the commissary, which was open for business. But he reminded people to maintain “social distancing” – keeping around 6 feet away from others – where possible.

Navy policies have diverged from the Army’s, which closed on-base schools and child care centers at Vicenza, in line with an Italian government directive, and canceled permanent moves and most temporary duty travel for 60 days.

U.S. Army Garrison Italy and Aviano Air Base are both in northern Italy, which has been the epicenter of the Italian outbreak since a state of emergency was declared in the country in late January.

But the first and so far only U.S. service member in Europe to test positive for the virus was a sailor based at Capodichino, near Naples International Airport. Navy officials announced Saturday that the sailor had contracted the virus and was confined to his home.

He was “doing quite well and because of an abundance of caution remains in the residence,” said Lt. Cmdr. Eric Vaught, public health officer, during the town hall Tuesday. All the sailor’s close contacts were in quarantine and being checked on daily, Vaught said, without indicating how many people were affected.

Asked by Abrahamson to suggest how the coronavirus epidemic might play out, Vaught said that warmer temperatures in the coming weeks could reduce infection rates.

But whether rising temperatures will slow the spread of COVID-19 is one of the unknowns about the virus, the Centers for Disease Control and Prevention says on its website.

Still, Zirkle insisted one of the indispensable life lessons from “a great book I read as a teenager, ‘The Hitchhiker’s Guide to the Galaxy,’” was the main message he wanted to convey to town hall viewers.

“Don’t panic,” he said, sharing one of the most memorable quotes from the 1979 novel.

“That’s what we want to make sure we get across to you today. We have a good handle of what’s going on here,” Zirkle said.