Death at sea separated these twins 74 years ago. Now they're back together. 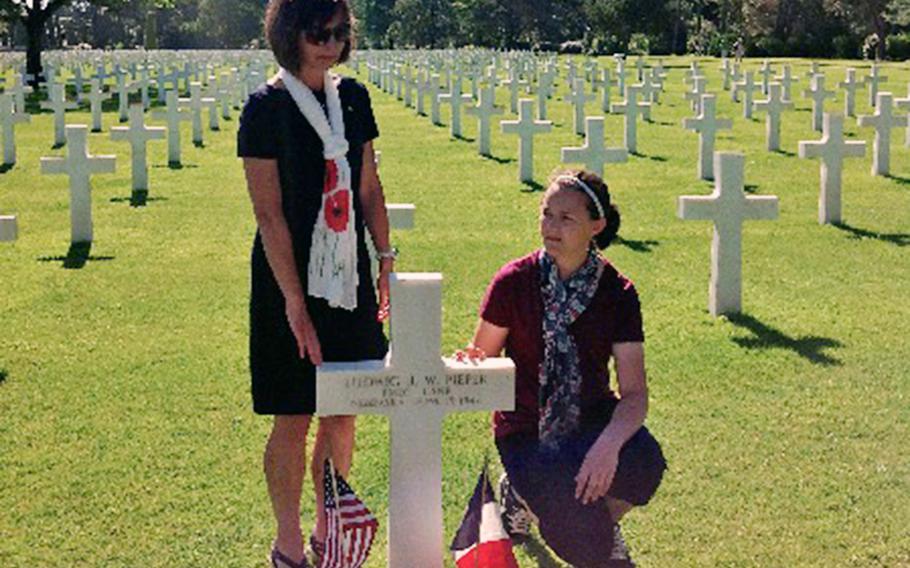 Nichole Flynn and Vanessa Taylor visited the grave of Ludwig Pieper in 2015. (Courtesy of Nichole Flynn) 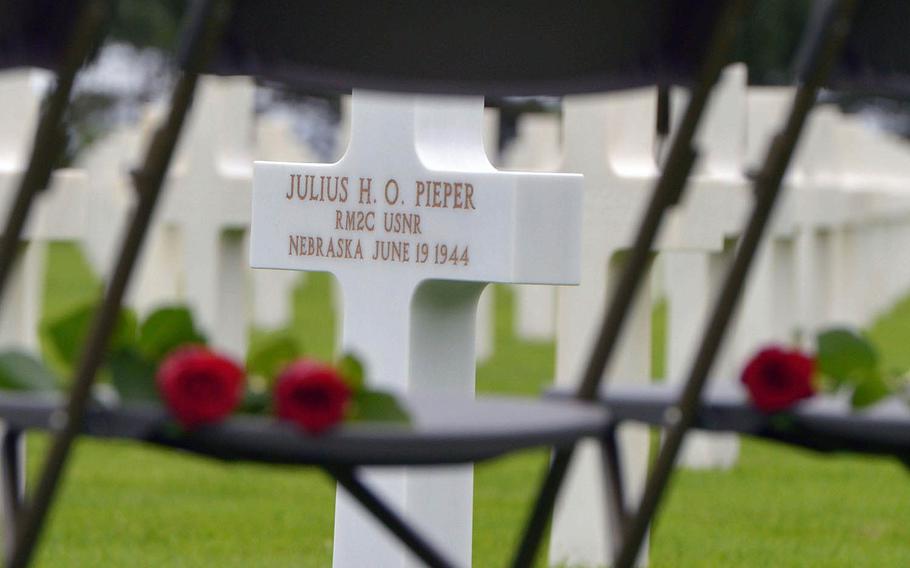 Roses that family members will place on the coffin of Julius “Henry” Pieper during his memorial service lie of chairs next to his headstone at Normandy American Cemetery in Colleville-sur-Mer, France, Tuesday, June 19, 2018. (MICHAEL ABRAMS/STARS AND STRIPES) 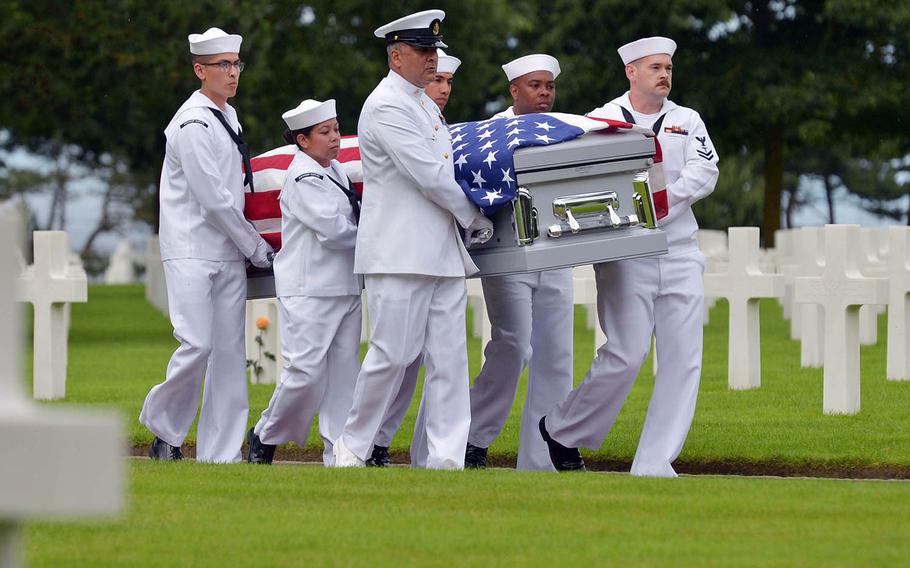 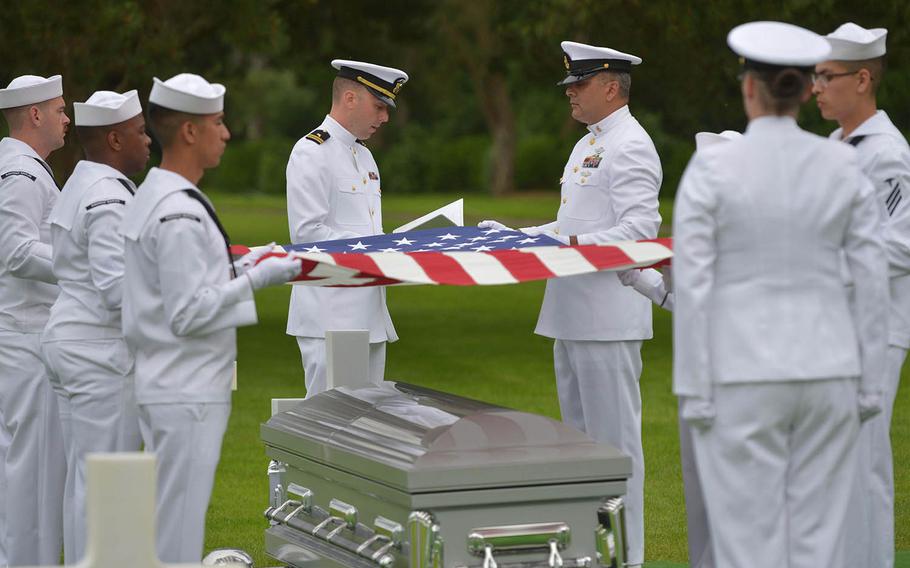 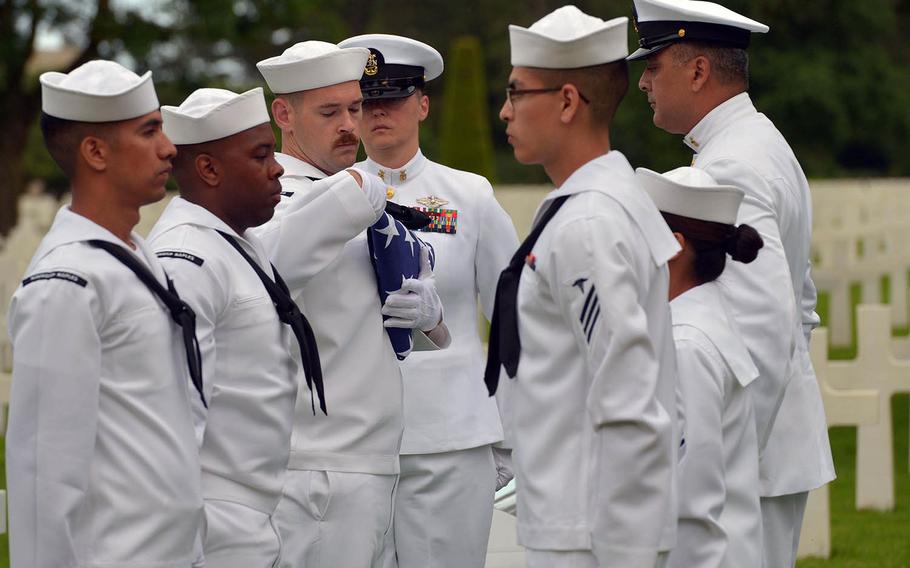 Sailors from the U.S. Naval Hospital Naples, Italy, finish folding the American flag during a memorial service for U.S. Naval Reserve Radioman 2nd Class Julius “Henry” Pieper at Normandy American Cemetery in Colleville-sur-Mer, France, Tuesday, June 19, 2018. Pieper was killed along with his twin brother, Ludwig, when their landing ship hit a mine on June 19, 1944. (MICHAEL ABRAMS/STARS AND STRIPES) 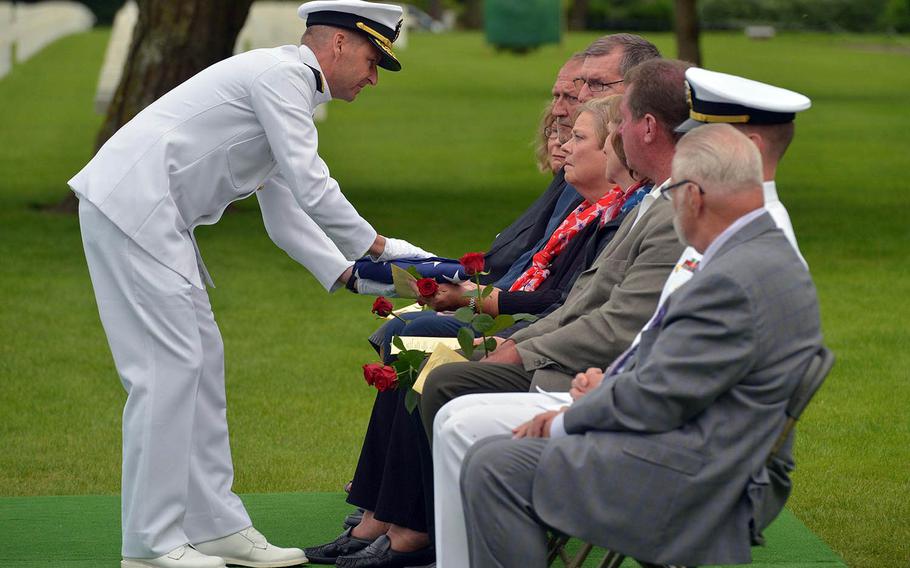 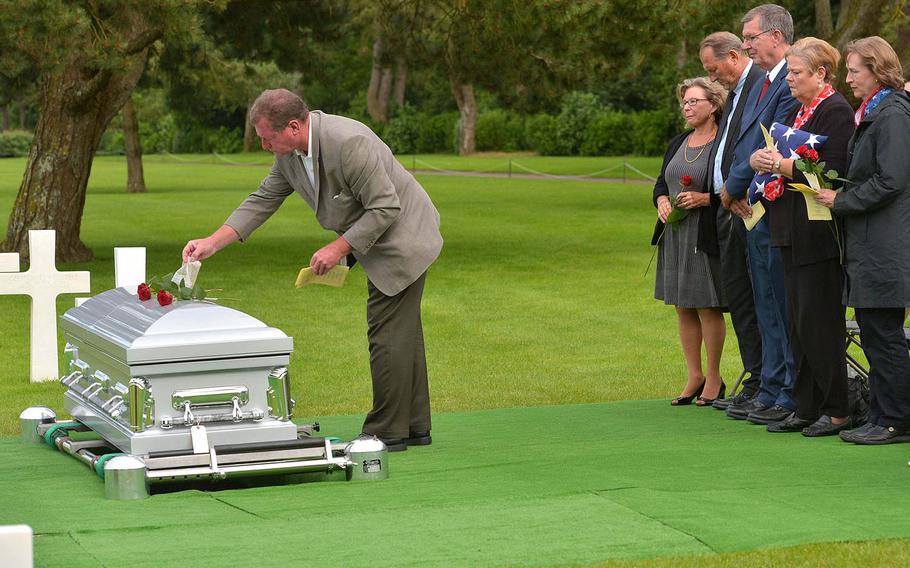 Fred Pieper, a nephew of Julius “Henry” Pieper, spreads dirt from Pieper's hometown on his coffin as other family members watch, during a memorial ceremony at Normandy American Cemetery in Colleville-sur-Mer, France, Tuesday, June 19, 2018. (MICHAEL ABRAMS/STARS AND STRIPES) 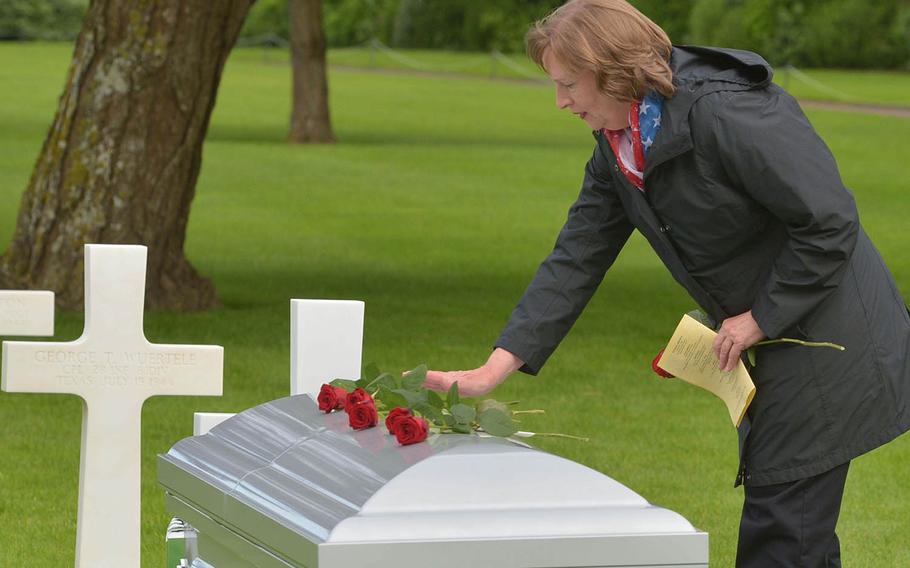 Julius “Henry” Pieper's niece Susan Lawrence places a rose on his coffin at the conclusion of a memorial service for Pieper at Normandy American Cemetery in Colleville-sur-Mer, France, Tuesday, June 19, 2018. (MICHAEL ABRAMS/STARS AND STRIPES) 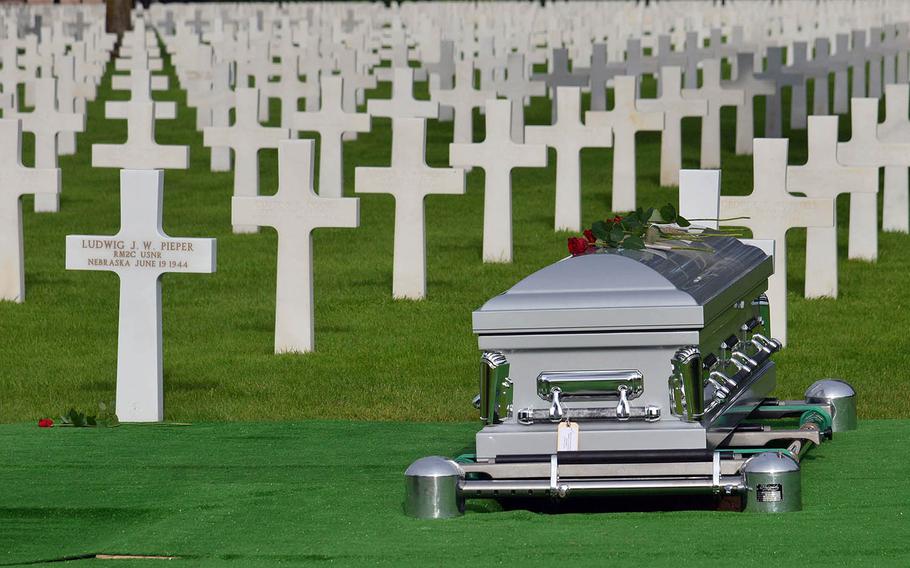 The coffin of Julius “Henry” Pieper sits at Normandy American Cemetery in Colleville-sur-Mer, France, next to the grave of his twin brother, Ludwig J. W. ''Louie'' Pieper. (MICHAEL ABRAMS/STARS AND STRIPES) 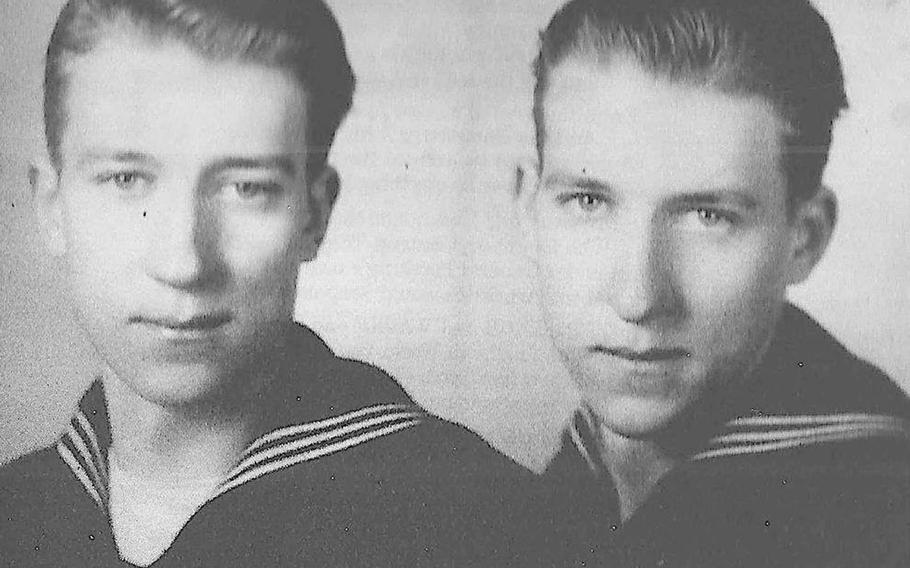 NORMANDY AMERICAN CEMETERY, France — Seventy-four years to the day after a German mine ended their lives off Omaha Beach, Petty Officers 2nd Class Julius “Henry” Pieper and Ludwig “Louie” Pieper are together again.

Henry’s burial at his brother’s side – the first Normandy interment since at least 1956, officials at the site said — is a culmination of improbable actions and events that included the review of a grave marked “unknown” in Belgium, a high school history project, a military forensics team review and a family gathering in small-town Nebraska.

A group of Naples-based sailors carried Henry’s flag-draped casket to a grave marked by a marble white cross lying next to Louie’s grave, which was moved from another plot for the occasion.

The sailors folded the flag and Rear Adm. Shawn E. Duane presented it to Linda Pieper Suitor, the brothers’ niece and next of kin.

“It’s a life-changing event for me,” said Suitor, of Green Valley, Ariz., who plans to meet with the local American Legion and talk with high school students about the sacrifices made by servicemembers like the Pieper brothers.

Henry and Louie Pieper joined the Navy together in 1943, following the path of their brother Fred, who went on to serve in the Guadalcanal campaign.

They trained as radiomen and were about to be separated until their father, Otto, wrote a letter to their commanding officer asking them to remain together.

“Their feeling was that they came into this life together, and whatever happened to them, they wanted to be together,” said Susan Lawrence, another of the brothers’ nieces.

LST-523 left Portsmouth, England, for another troop transport mission on June 18, 1944, according to Tec 5 Clifford C. Alexander, whose testimony was included in a December 1944 investigation report. They were about a mile and a half from Utah Beach at 1 p.m. the following day when they raised their anchor.

They “had been underway several minutes when a tremendous explosion occurred somewhat aft of the center of the ship,” Alexander said in the report.

Many of the those aboard, who included crewmembers and soldiers from the 300th Combat Engineer Battalion, were in the mess line near the center of the ship and died soon after a German magnetic mine tore it in two.

Rescue ships showed up 10-20 minutes after the blast, according to several accounts. Of 145 onboard, 117 died. Louie’s body was recovered in the water and buried at Normandy American Cemetery.

Henry’s name was placed alongside more than 1,500 others on the cemetery’s Walls of the Missing.

In 1961, a French salvage group dived down to the LST-523 wreck and found multiple sets of remains. No one notified the Piepers of the excavation.

In 1965, remains from the ship were transferred to a grave marked “unknown” at the Ardennes American Cemetery and Memorial in Neuville, Belgium.

Their task was to research a “silent hero” from their home state whose story hadn’t been told. In 2015, Taylor came upon two sailors with the same last name after searching the Normandy cemetery’s database.

She became intrigued and, through continued research, confirmed that they were twins and contacted Henry and Louie’s sister, Mary Ann Lawrence.

“Having the chance to talk with her, it really felt like (the brothers) were real people whose stories needed to be told, rather than just something from a textbook,” Taylor said by phone from Kearney, Neb., where she now attends college.

Taylor and Flynn requested Henry Pieper’s deceased personnel file, which documents a servicemember’s death and the disposition of remains.

Meanwhile, the Defense POW/MIA Accounting Agency, or DPAA, had already been looking generally at cases of graves marked unknown.

The file request put Henry Pieper’s case in the spotlight.

“If (Taylor) hadn’t made the request at the time, we don’t know when this (ceremony) would have happened,” Tim Nosal, spokesman for the American Battle Monuments Commission, said Tuesday.

Further research determined that the remains in the unknown grave came from the LST-523 radio room. DPAA requested the remains be sent to Offutt Air Force Base, Neb., for laboratory analysis and medical record comparisons.

On Memorial Day 2016, Flynn and Taylor traveled about three hours to Creston, Neb., which became Henry and Louie’s home after they moved from Esmond, S.D., as children. The Pieper family flew in from all over the country and spoke with them. They heard details they never knew about the brothers, who died as 19-year-olds.

Taylor went on to give her eulogy of Henry at Normandy as part of the National History Day program. The text is available at a project website she created.

Family members say that they heard little about Henry and Louie growing up. The painful memories were largely avoided. But on Tuesday, they shared the anecdotes passed down to them of two fun-loving, nearly inseparable twins.

“The only time they were separated is when they had different girlfriends,” said Henry Pieper, who was named after his uncle. “And they even had twins as girlfriends.”

Mary Ann Lawrence, Susan’s mother, joined the Naval Reserve under the WAVES program. She was the last alive of Henry and Louie’s siblings. She found out that Henry’s remains had been accounted for just before Thanksgiving last year.

“I was shocked and surprised and happy,” Mary Ann Lawrence told the Omaha World-Herald in January.

Mary Ann Lawrence died May 5. That she lived to know what happened provided solace, as does the family’s faith that she is with her brothers now.

“Nothing could have been better for Thanksgiving, at last, to have that knowledge,” Susan Lawrence said. “It was a kind of burden she had been holding all this time.”

On Tuesday, some of the Piepers and their spouses shed tears as Navy Chaplain Lt. Ken Stiles gave the benediction. They put flowers on Henry’s casket, and later Suitor placed a rosette next to his name on the Walls of the Missing, formally marking him in a known grave.

Each of the family members expressed gratitude to everyone who made the day’s events possible.