Coronavirus vaccinations delayed for Army in Europe as infections rise 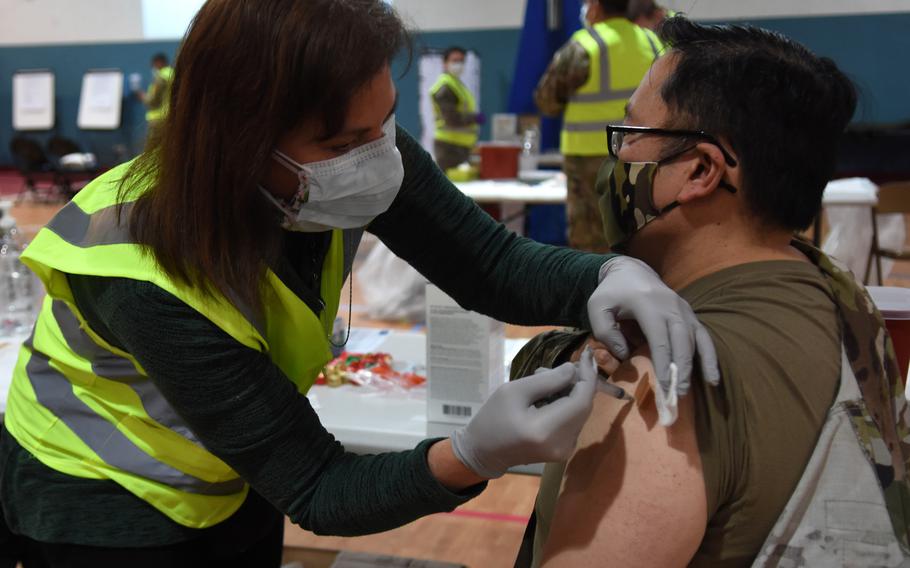 Buy Photo
Sarah Lewis, a registered nurse with the 86th Medical Group, vaccinates group commander Col. Ryan Mihata against COVID-19 at Ramstein Air Base, Germany, in January 2021. Vaccination campaigns for the U.S. military and their families in Europe have slowed as supplies dwindle and new deliveries are delayed. (Jennifer H. Svan/Stars and Stripes)

KAISERSLAUTERN, Germany — The largest U.S. military hospital overseas may have to cancel coronavirus vaccinations as of next week, as supplies dwindle and new deliveries are delayed, it said.

Most appointments to get a follow-up shot at Landstuhl Regional Medical Center near Ramstein Air Base could be canceled starting Tuesday morning, and patients will be “rescheduled as soon as we are resupplied,” LRMC said in a post on its Facebook page Wednesday.

New supplies of the vaccine might not arrive for several weeks, it said. Only second doses are available for now, LRMC said.

The delay contrasts with commands in the U.S., the Asia-Pacific region and the Middle East, several of whom have recently received large vaccine shipments.

The Landstuhl holdup could put some patients who have already had the first dose of the Moderna vaccine outside the recommended four-week time frame for a second dose.

While military health leaders are “working hard to find a way” to avoid having to cancel second-dose appointments, anyone who does fall outside the window for the second dose will receive it “as soon as we are resupplied,” LRMC said. They will not have to go back to square one and have the first dose again, it said.

The Moderna vaccine is around 94% effective at preventing the disease caused by the coronavirus if two doses are administered about 28 days apart, according to the U.S. Centers for Disease Control and Prevention. But the second dose can be given as many as six weeks after the first with little impact on the vaccine’s efficacy, the CDC has said.

The delays were announced as new infections climbed in Germany — from a weekly average 65.4 new cases per 100,000 people to 69.1 from Wednesday to Thursday — and the head of the public health agency, the Robert Koch Institute, said the third wave of the virus was beginning in the country.

U.S. Army Garrison Wiesbaden warned on its Facebook page this week that its vaccine supplies also were limited “and shots are not guaranteed.”

The delay comes a week after Army Lt. Gen. Robert Place, head of the Defense Health Agency, told a virtual town hall that a “significant number” of DOD locations would begin vaccinating the general population, including civilians, next month.

President Joe Biden has said there will be enough vaccine for every American adult in the U.S. to be inoculated by the end of May.

In South Korea this week, the U.S. military received 9,700 doses of the single-dose Johnson & Johnson vaccine, which recently received emergency use authorization from the Food and Drug Administration.

Air Force Central Command, whose area of responsibility stretches from Egypt to Kazakhstan, received the Johnson & Johnson vaccine this week, command officials told Stars and Stripes. Navy officials in Japan have said they expect to receive it soon.

The Defense Department has prioritized distribution and is “initially focusing on distributing doses” of the Johnson & Johnson vaccine “to forces deployed to austere locations,” LRMC said on Facebook.

But neither Japan nor South Korea are typically considered austere by the military.

While the military in Europe can order the one-shot vaccine, the Defense Logistics Agency, which distributes the vaccine, “has not received any orders from the Military Services to ship the Johnson & Johnson vaccine to bases in Europe at this time,” spokeswoman Michelle McCaskill said.

There are no vaccine shipping delays or backlogs to any locations, McCaskill said.

Meanwhile, military personnel and family members in Europe are growing frustrated at the slow pace of the vaccination campaign where they live.

“It feels like troops overseas are being de-prioritized because no one can brag about us in their state vaccination stats. We are orphaned,” a commenter said on LRMC’s Facebook page this week.

“I just wish we were a priority,” said another.

Army health clinics in Europe submit the number of beneficiaries they have in each DOD vaccine priority group to the Department of the Army, said Gino Mattorano, spokesman for Regional Health Command Europe.

The Army uses that information to help determine vaccine allocations, he said, noting that “supply constraints and Army priorities limit how much vaccine is sent to each location.”