Coronavirus numbers plummet in Kaiserslautern area, home to thousands of US troops 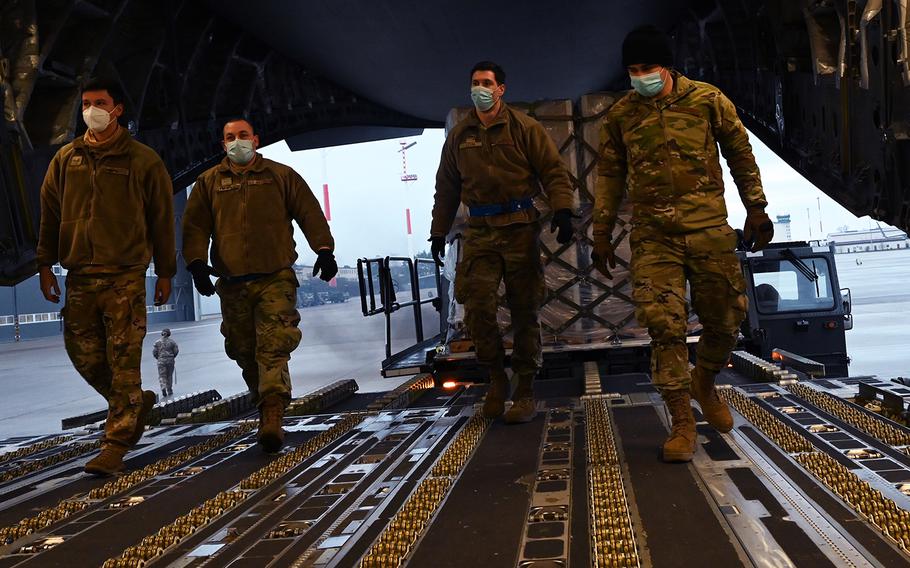 Airmen from the 721st Aerial Port Squadron walk into a C-17 Globemaster III aircraft to retrieve a pallet at Ramstein Air Base, Germany, Feb. 2, 2021. Although the U.S. military community makes up around 16% of the population of the Kaiserslautern district, Americans are not counted when German health officials calculate the key weekly infection rate for coronavirus. (Thomas Karol/U.S. Air Force)

Airmen from the 721st Aerial Port Squadron walk into a C-17 Globemaster III aircraft to retrieve a pallet at Ramstein Air Base, Germany, Feb. 2, 2021. Although the U.S. military community makes up around 16% of the population of the Kaiserslautern district, Americans are not counted when German health officials calculate the key weekly infection rate for coronavirus. (Thomas Karol/U.S. Air Force) 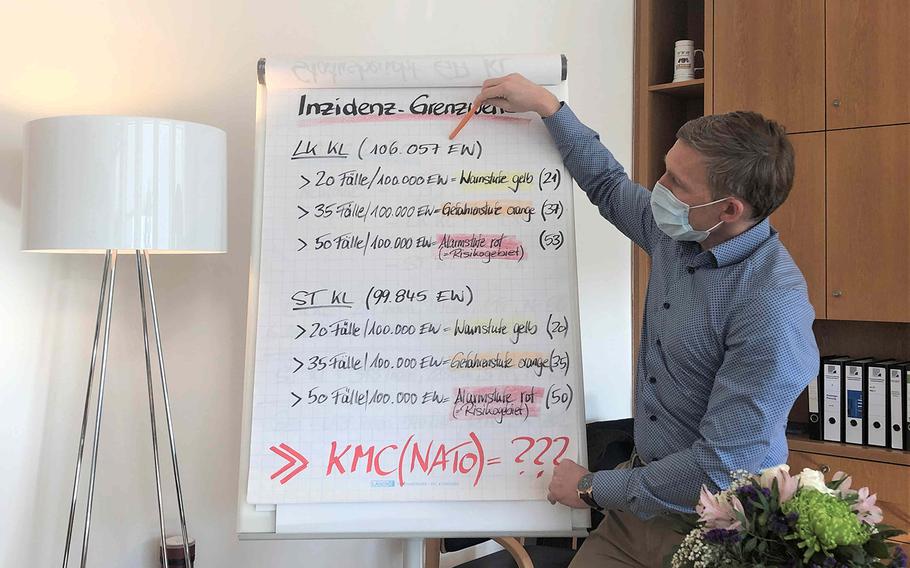 Buy Photo
Kaiserslautern District Councillor Ralf Lessmeister explains how weekly coronavirus incidence rates are calculated, on Feb. 12, 2021, noting that the U.S. military community was not included in the tally, even though it makes up a significant portion of the population. (Karin Zeitvogel/Stars and Stripes) 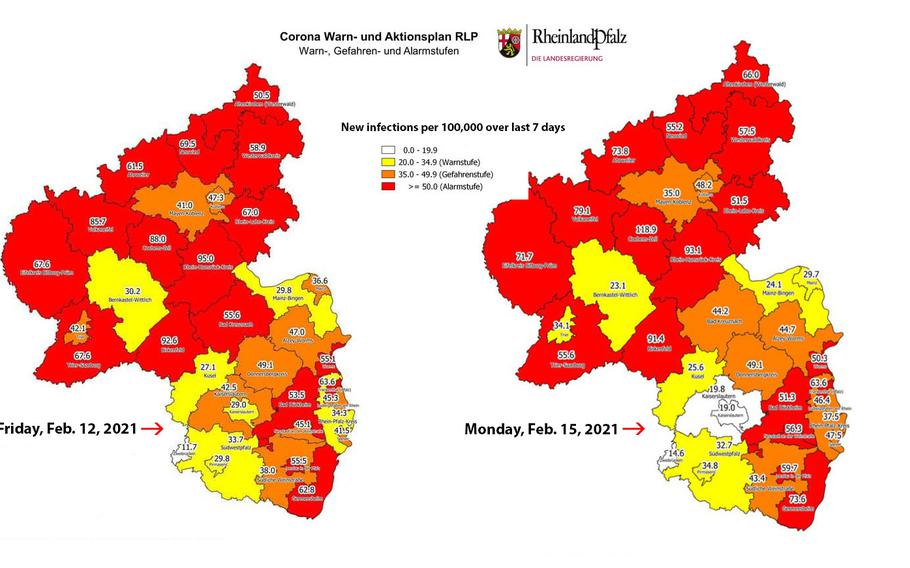 Maps posted online by the state of Rheinland-Pfalz show a sharp fall in the weekly coronavirus incidence between Friday, Feb. 12, 2021 and Monday, Feb. 15, 2021. The incidence in the area, where some 24,000 Americans live, is well below the weekly rate of 35 new cases per 100,000 residents that the federal and state governments set as the target to reach before shops and other small businesses can reopen. (Rheinland-Pfalz)

KAISERSLAUTERN, Germany — New coronavirus infections in the Kaiserslautern area have plunged below the rate at which the government has said shops and small businesses can reopen, data posted by Germany’s public health agency showed Tuesday.

The city of Kaiserslautern had 19 new cases per 100,000 residents over the previous seven days and the surrounding district had 19.8 cases, the Robert Koch Institute said on its website.

The infection rate in Kusel, where just over 3,800 Americans live, was also below the rate of 35 new infections per 100,000 residents that the German federal and state governments set last week as the target to reach before shops and small businesses can reopen in early March. But in Birkenfeld district, home to the Army garrison at Baumholder, the average rate remained above 100 new infections per 100,000 residents as of Tuesday.

The decision to reopen shops is taken at the state level, Rheinland-Pfalz officials said. But state spokeswoman Stefanie Schneider said it was impossible to say if shops and small businesses would be allowed to reopen earlier than the government-set date of March 7, even if they sustain their low infection rates.

That will depend on the outcome of the next meeting — probably in March — between the governors and Chancellor Angela Merkel, she said.

In an interview last week with ZDF television, Merkel said that if the infection rate “stays below 35 for two weeks, we can look at the next step” in Germany’s cautious reopening.

But she was referring to what happens after March 7 and didn’t discuss the possibility of an earlier reopening.

The figures for Kaiserslautern could be even lower than what is shown on RKI’s website, state and local officials said. They appear to exclude the sizeable American military community, whose inclusion often lowers the area’s weekly infection rate.

Some 24,000 members of the U.S. military community live in the Kaiserslautern area, which is home to Ramstein Air Base and several Army and Air Force installations, data provided to Stars and Stripes by the office of District Councillor Ralf Lessmeister show. In total, more than 38,000 Americans live in the state, many of them affiliated with the military.

Rheinland-Pfalz sends two sets of numbers to RKI — including and excluding Americans — but the health agency posts only the higher incidence rate, which doesn’t include the U.S. military population, Schneider said. It does, however, count individual Americans who are infected, she said.

The state has “pointed out this problem to the RKI and the Federal Ministry of Health several times, but is not authorized to issue instructions,” Schneider said in an email.

Lessmeister has been pushing for months for Americans to be counted when calculating incidence rates, he told Stars and Stripes in an interview Friday.

Germany has taken a cautious approach toward reopening to avoid “a pronounced third wave,” as more infectious variants of the virus spread throughout the country, Merkel told ZDF.

Illustrating the dangers posed by those variants and looser restrictions, the number of new cases in Rheinland-Pfalz’s Bitburg-Pruem district, which is home to Spangdahlem Air Base, rose sharply at the end of last week.

“We led the rest of the country at the start of the week with an incidence of 18.2 per 100,000, but that climbed to 66.6 after outbreaks in two child day care centers,” the city of Trier’s Volksfreund newspaper said Sunday.

“It can happen so fast,” it said, blaming the sudden spike in cases on coronavirus mutations, which caused nearly half of the new infections in the district.