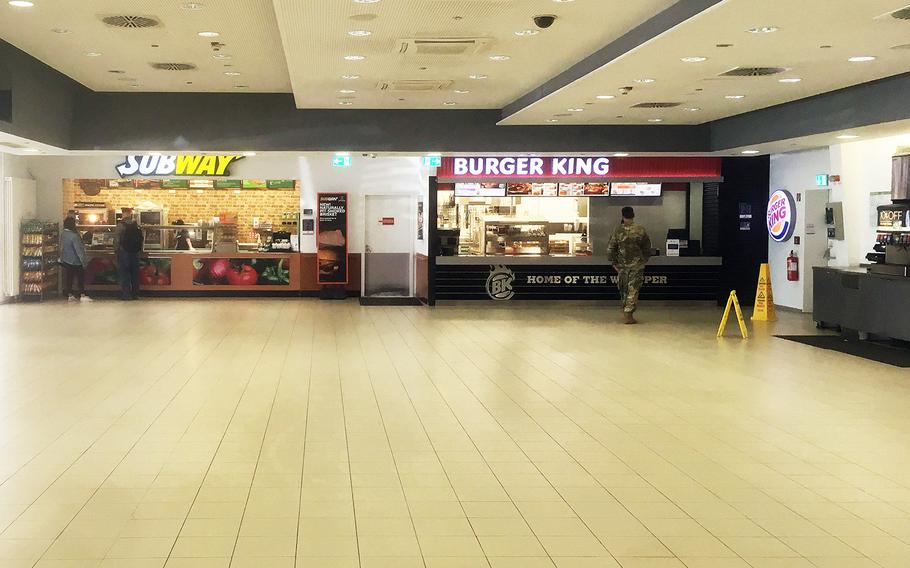 The food court at Patch Barracks in Stuttgart, Germany, is deserted on Wednesday, March 18, 2020. Coronavirus cases continue to climb in Stuttgart, which has the most infections of overseas bases. Recent tests show a loss of smell and taste to be a new indicator of possible infection. (John Vandiver/Stars and Stripes)

STUTTGART, Germany — Expanded testing for the coronavirus at the Army’s garrison in Stuttgart has confirmed more infections there than in the military communities in Japan, South Korea and the rest of Germany combined, and found some unusual virus symptoms.

At least 69 members of the military community in Stuttgart were infected with coronavirus as of Friday, the garrison said, citing results from tests conducted since last weekend that included around 250 people without symptoms.

The number of infections was more than double what it was Monday, when the garrison reported 31 cases of the virus.

Four cases have been reported in the military in Japan, 12 in South Korea, and 45 in the rest of Germany, according to a rapidly changing tally compiled Friday by Stars and Stripes.

The expanded testing at Stuttgart found that, along with the more usual fever, cough, sore throat and body aches, loss of taste or smell appears to be a symptom of coronavirus infection in some cases.

“The people that we’ve tested that didn’t have any symptoms, we found that … in many of them,” garrison commander Col. Jason Condrey said in a virtual town hall Thursday.

The American Academy of Otolaryngology called on medical workers to watch for the same symptoms in a statement earlier this week.

Stuttgart expanded testing days before the Pentagon this week elevated the health threat at bases worldwide to the second highest level, “Charlie.” Under HPCON Charlie, access points to bases are limited and only essential personnel are allowed on base.

Personnel are expected to continue to follow social distancing guidance, the Army said Tuesday when it announced the heightened threat level.

But the tougher restrictions have hardly impacted the garrison in Stuttgart, where normal life ground to a halt three weeks ago after the first cases of coronavirus were diagnosed in the community.

Many base services have shuttered, food courts have been cleared of tables, chairs and sit-down customers, and numerous personnel have been ordered to telework. Community members have been told to stay home unless they’re shopping for essentials.

But there are concerns that some people with symptoms of the virus are still venturing out into public rather than isolating themselves, or ignoring social distancing guidance, which calls for people to stand at least 6 feet apart from each other.

Anyone caught flouting the rules, which aim to slow the spread of the virus, will be punished, Condrey said, citing the case of a couple who got tested at the drive-thru center on Patch Barracks, and then parked across the street at the commissary, presumably to go shopping.

“If I find those individuals, you won’t be allowed back on the installation,” Condrey warned.

Health workers continue to test symptomatic people at the Patch Barracks drive-thru but it wasn’t clear Friday if there are plans to also keep testing those without symptoms.

But for now there are no immediate plans to resume testing on asymptomatic people. Future testing “may depend on the amount of testing kits available,” garrison spokesman Larry Reilly said Friday.

At least one health clinic worker has tested positive for the virus, which in some cases can lead to severe lung illness and death, and several personnel, including the clinic commander, are in self-isolation and having to telework, Condrey said.

“The clinic has, not surprisingly, been a very hot spot,” Condrey said.

Stars and Stripes reporter David Edge contributed to this story.