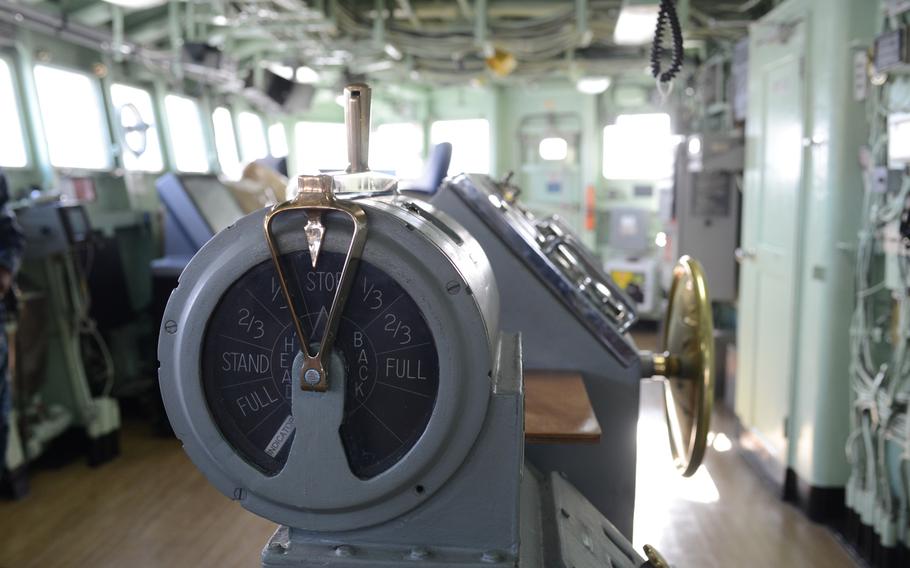 The engine order telegraph on the bridge of the USS Mount Whitney, flagship of U.S. 6th Fleet. Commissioned in 1971 and crewed largely by civilian mariners, the Mount Whitney serves as a floating operations center for fleet commanders, allowing them to direct Navy surface ships, submarines and aircraft from international waters. (Steven Beardsley/Stars and Stripes)

The engine order telegraph on the bridge of the USS Mount Whitney, flagship of U.S. 6th Fleet. Commissioned in 1971 and crewed largely by civilian mariners, the Mount Whitney serves as a floating operations center for fleet commanders, allowing them to direct Navy surface ships, submarines and aircraft from international waters. (Steven Beardsley/Stars and Stripes) 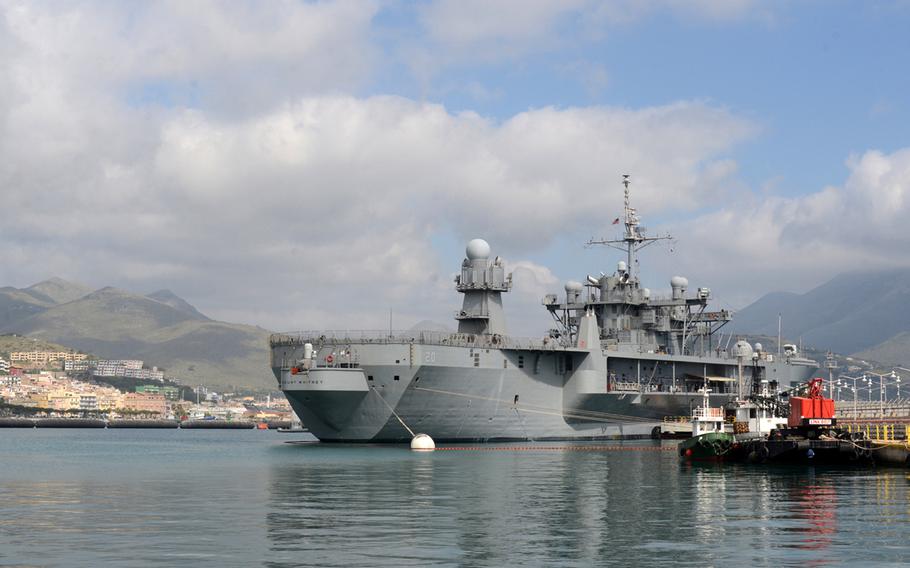 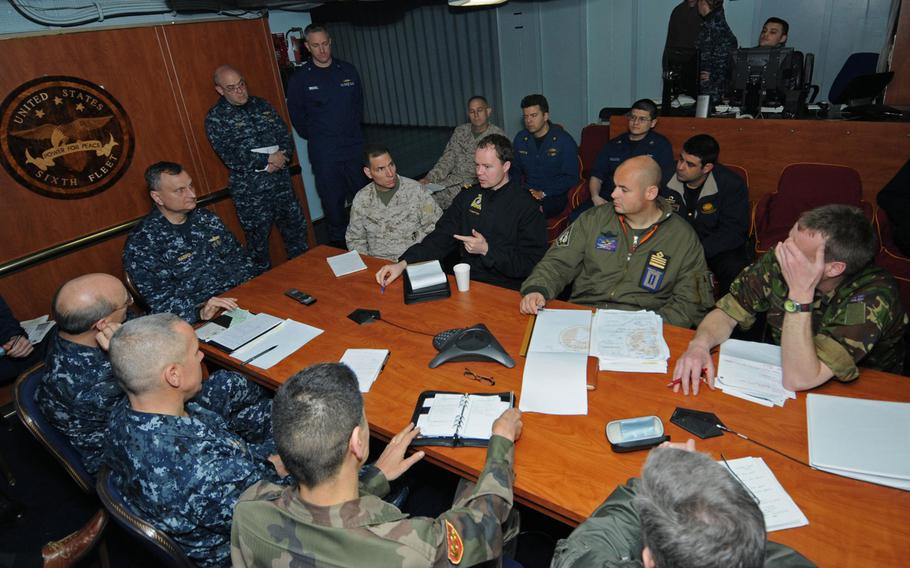 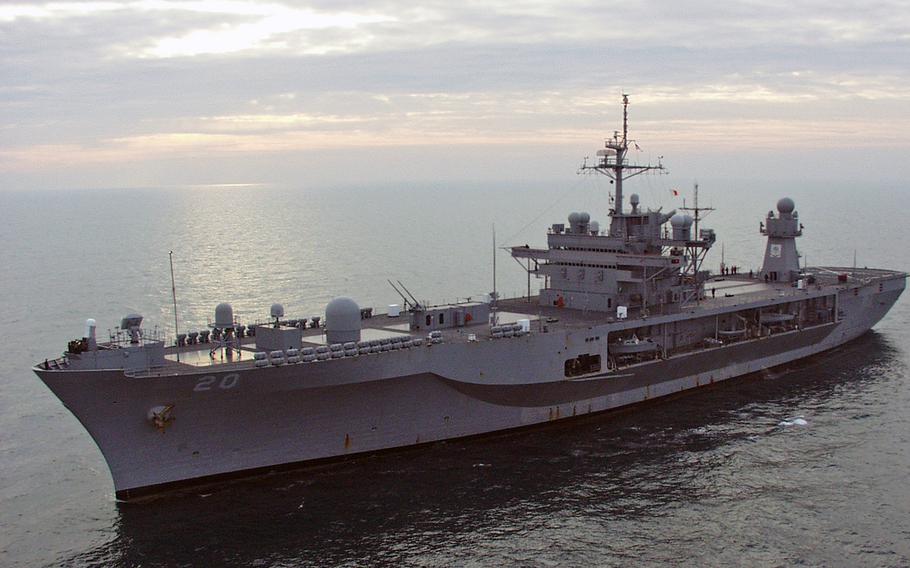 After a 14-day journey across the Atlantic Ocean from Norfolk, Va., the USS Mount Whitney sails toward Gaeta, Italy, just as the sun dawns Tuesday morning, Feb. 1, 2005. (Stars and Stripes) 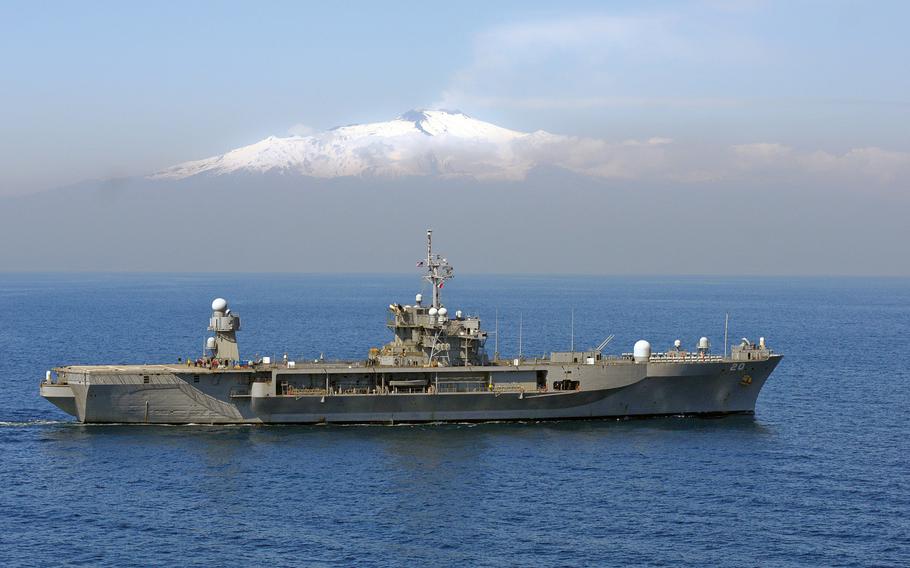 GAETA, Italy — From a bridge wing of the USS Mount Whitney, executive officer Lt. Cmdr. Chris De Leon pointed out the exterior radar arrays to be swapped out during a coming maintenance period.

“This will change, that will change,” he said, indicating large and small domes on the ship’s fore and aft. “You won’t see two of these anymore,” he said, pointing to another. “You’ll see one.”

“Anything and everything that’s happening Navy, from the Atlantic to the Black Sea, the Baltic Sea and over to the Red Sea is under our purview,” said Capt. Carlos Sardiello, commanding officer.

And there’s a lot happening in Europe right now, to judge by the Mount Whitney’s schedule.

It sailed to Scotland in October for a first-of-its-kind multinational ballistic missile demonstration. It will head to the Baltic Sea in a few months for an exercise that will flex U.S. and NATO maritime might in a region increasingly contested by Russia. Sandwiched in between are visits to friendly ports and events like this month’s “tiger cruise” for family and Navy personnel in the area.

One of only two active, purpose-built command ships commissioned by the Navy, the Mount Whitney arrived in Gaeta in 2005, the same year the Navy moved its European command from London to Naples in a shift of focus toward the Mediterranean. Equipped with defensive weapons alone, the ship was designed as a floating maritime operations center, or MOC, that would allow 6th Fleet to move its staff from headquarters in Naples off shore when necessary.

“All the functions that the MOC does in Naples, they can do here,” said De Leon. “We shift the MOC.”

The ship wears a NATO hat and has a separate NATO staff, reflecting the 6th Fleet commander’s dual role as head of Naval Striking and Support Forces NATO, or STRIKFORNATO.

The Mount Whitney is one of four “hybrid crews” in the Navy. Civilian mariners are responsible for navigation, while uniformed sailors man communication equipment and weapons. Sardiello, the ship’s commanding officer, has authority over the entire crew.

The fleet commander and his staff make use of the ship’s large operations center, where they can monitor events, hold meetings and brief others via secured communications. The ship’s ever-shifting radar arrays are central to the ship’s connectivity.

The Mount Whitney has good reason to stay prepared these days. European waters, regarded as sleepy after the end of the Cold War, have become active again. Russia has increased its maritime patrols, while instability across North Africa and the Middle East threatens to bleed into Europe.

The Mount Whitney was among the first American ships to visit Georgia after Russia’s invasion. It was headquarters to the four-star joint task force that bombed Libyan regime forces of Moammar Gaddafi in 2011. It returned to the Black Sea three years later as terrorism fears ran high around the Sochi Olympics.

After several years in which it was the only permanently stationed American ship in Europe, the Mount Whitney has been joined by four guided-missile destroyers moved to Rota, Spain. Although each is armed with far more weapons, the Mount Whitney calls the shots when the commander is embarked, said Sardiello.

“Everything in the theater is the weapons,” he said. “And it’s all at the admiral’s fingertips here.”