Briton digs up remnants of a fierce time 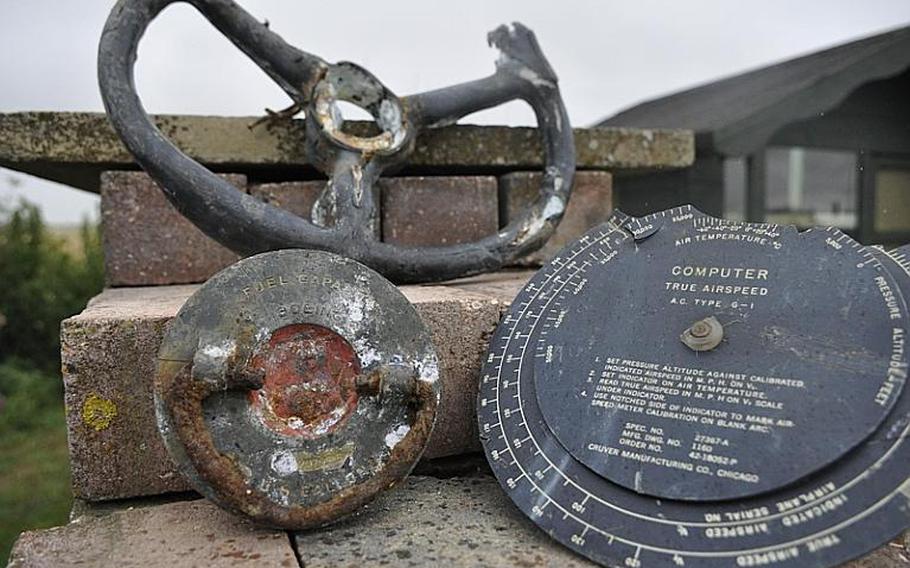 When the 8th Air Force left the eastern English countryside at the end of World War II, they left a lot of gear behind, and much of it got buried in the Norfolk county farmland by troops who just wanted to get home. Using the memories of elder locals and other tips, local enthusiasts search out these buried caches of history. Random bits unearthed last year include this aircraft steering wheel, a fuel gauge and an air speed computer. (Geoff Ziezulewicz/Stars and Stripes)

When the 8th Air Force left the eastern English countryside at the end of World War II, they left a lot of gear behind, and much of it got buried in the Norfolk county farmland by troops who just wanted to get home. Using the memories of elder locals and other tips, local enthusiasts search out these buried caches of history. Random bits unearthed last year include this aircraft steering wheel, a fuel gauge and an air speed computer. (Geoff Ziezulewicz/Stars and Stripes) Simon Dunham, a British resident of Norfolk County, England, is an enthusiastic seeker of American World War II-era aircraft parts and other gear buried in area fields by the Yanks after the war ended in 1945. Holding a piece of a bomber's exhaust system, and with a variety of debris from an excavation last fall around him, Dunham sees a bridge to times past. "Who was the last person who used this? Why was it thrown away?" Dunham asks. "There's a story behind every single part here." (Geoff Ziezulewicz/Stars and Stripes) 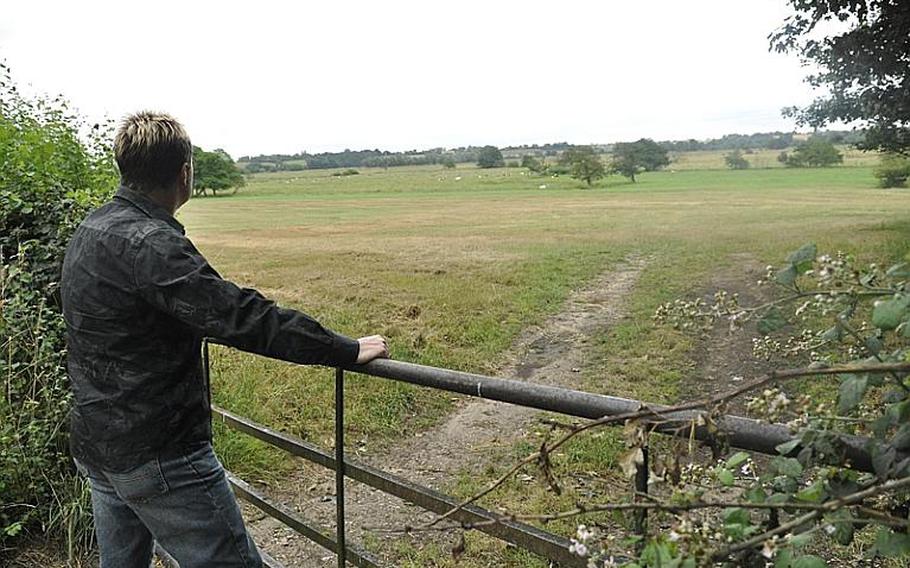 The Maybread field in Norfolk County, England, might not look like much, but to guys like Simon Dunham, a huge piece of World War II history lies beneath fields like this across the eastern English countryside. After World War II ended, the 8th Air Force buried all sorts of materiel in area fields before heading home. Dunham hopes to one day unearth a bicycle with an airplane'ss steering wheel soldered on to it. Dunham's father used to tell him how, as a boy, he asked the Yanks for that bike. The Americans refused and buried it somewhere. "I've never been able to find it as yet," Dunham said, "but that doesn't mean I'm not going to." (Geoff Ziezulewicz/Stars and Stripes) Last October, Simon Dunham led an excavation of this innocuous-looking field in Norfolk County, England, just more than an hour from the U.S.airmen stationed at RAFs Mildenhall and Lakenheath. But below the field's surface lies a piece of U.S. military history, dating back to World War II. In 1945, at the war's end, the 8th Air Force buried all types of unneeded gear in farmland across eastern England. Using radar imagery, Dunham pinpointed this site and pulled out eight tons of antiquated aircraft parts and other items. He says there's more still down there, and that the bumps and dips in the field allude to what lies beneath. There are even rumors that a B-17's fuselage found its final resting place in this field. (Geoff Ziezulewicz/Stars and Stripes) An 8th Air Force formation heads out for another mission to bomb Germany during World War II. (Courtesy of 8th Air Force) An 8th Air Force B-17 Flying Fortress drops bombs over Marienburg, Germany, in 1943. The countryside of eastern England was the base of operations for the 8th Air Force in World War II from 1942 to 1945. Pilots flew daily bombing raids into the German heartland. (Courtesy of 8th Air Force) 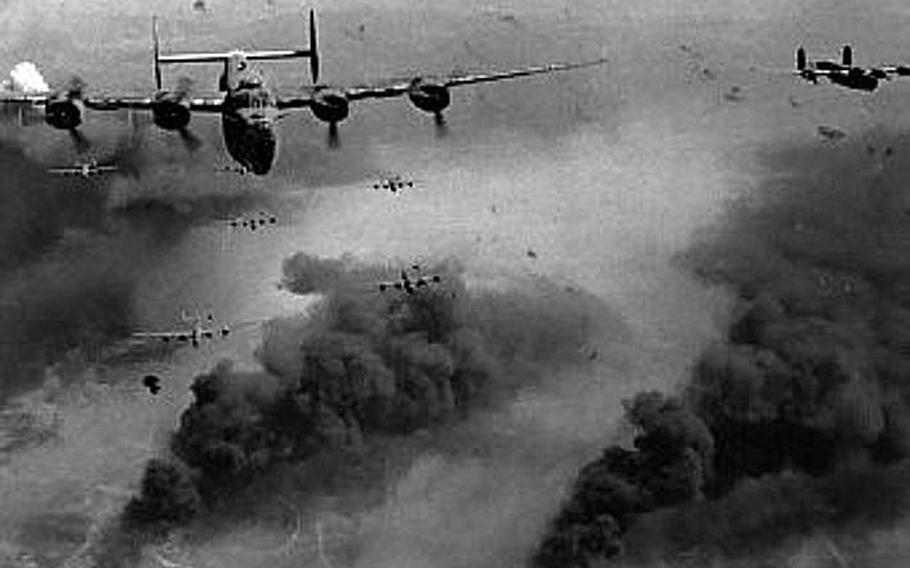 B-24 Liberators rumble above Germany during a World War II bombing mission, the fruits of their labors apparent as smoke belches up from obliterated targets on the ground. (Courtesy of the 8th Air Force)

NORFOLK COUNTY, England &mdash; At first glance it doesn&rsquo;t look like much, just another farm field full of indifferent cows in eastern England&rsquo;s Norfolk county, about a 90-minute drive from the U.S. airmen stationed at RAFs Mildenhall and Lakenheath.

But upon closer inspection, this green stretch of earth dips and swells, as if to suggest there is more underneath than just dirt.

Sixty-five years ago, this field, known as Maybread to the locals, was a supply depot for the 8th Air Force during World War II. It was here in East Anglia that B-17 Flying Fortress and B-24 Liberator crews said a prayer and commenced their daily bombing raids into Germany to battle the Nazis.

But in their haste to leave Europe after the war&rsquo;s end in 1945, the Americans didn&rsquo;t ship home all their assorted war materiel. They buried it. All over the place.

Simon Dunham wants to find it all.

Dunham has led the charge to find and unearth these caches of spare parts, weapons and other items left behind when the Americans went home.

Last October he led the first formal excavation of the Maybread site. Using radar imagery, Dunham and his cohorts unearthed eight tons of spare parts, only a fraction of what lay at the site. There were lots of exhaust system pieces &mdash; some pierced by enemy rounds &mdash; oxygen bottles and other quiet pieces of history, including a &ldquo;true air speed computer,&rdquo; essentially a metal dial that told pilots their speed in a less-technological time.

For Dunham, it&rsquo;s just the start. As far as he knows, there&rsquo;s no definitive inventory of such burial sites, so he relies on the memories of older locals while swapping intel with other enthusiasts. Rumors abound that a B-17 fuselage may be somewhere under the field at Maybread. Other sites that were once airfields could have buried jeeps or even Harley-Davidsons waiting to be unearthed, he said.

&ldquo;We just don&rsquo;t know what else is out there,&rdquo; he said.

It&rsquo;s not just scrap that&rsquo;s out there. When damaged bombers crashed in the British countryside, the air crews perished with them, Dunham said.

&ldquo;In these fields, there&rsquo;s still service personnel lying in their aircraft,&rdquo; he said.

Thirty pounds of &ldquo;flesh, bone and tendon&rdquo; were required for a burial back then, Dunham said, but often even that was not found. When a 30-ton aircraft crashed into the ground at 300 mph, the fragile human body didn&rsquo;t stand much of a chance.

Older folks in the area said the wreckage would burn so furiously that crews would just bury the smoldering ruins as soon as they could.

Holding a piece of an exhaust system at his nearby home, Dunham sees the innocuous bit of metal as the bridge to another time, an era whose survivors are fading away as the years progress.

&ldquo;Who was the last person to use this? Why was it thrown away?&rdquo; Dunham asks. &ldquo;There&rsquo;s a story behind every single part here.&rdquo;

The U.S. 8th Air Force arrived in England in April 1942 and stayed for roughly three years. Along the way, they transformed this sleepy countryside, eventually using 123 stations during its peak presence from late 1943 to early 1944, according to Lane Callaway, an 8th Air Force historian at Barksdale Air Force Base, La.

In 1942, construction on a new airfield was started every three days, he said in an e-mail, becoming the largest civil engineering project in British history. Most bases had three intersecting runways, with the amount of concrete poured equivalent to 4,000 miles worth of three-lane highways.

This rapid buildup was essential to taking the strategic air war into the German heartland, according to Callaway.

&ldquo;The history, heritage and achievements earned by The Mighty Eighth during its aerial combat in Europe during the years 1942 through May 1945 has a foundation firmly planted (in) airfields created throughout the countryside of East Anglia,&rdquo; Callaway said.

The Mighty Eighth flew its first mission on July 4, 1942, a bombing raid into occupied Holland that was largely a symbolic show of force, Callaway said. By the time it left in 1945, the 8th had flown nearly 1,000 missions, he said.

Dunham had listened to the World War II stories of his father and grandfather since he was a boy.

His grandfather worked at a Red Cross club in the area. For the locals back then, Dunham said, life transformed overnight. All of a sudden there were more than 3,000 personnel at each base, he said. Every four or five miles, &ldquo;you had this American town spring up.&rdquo;

&ldquo;People back then hadn&rsquo;t seen Americans, only at the movies,&rdquo; he said. &ldquo;All of a sudden they&rsquo;re at your pubs, they&rsquo;re taking your daughter out.&rdquo;

Although he had never personally heard of the equipment burial sites, Callaway said such dumping grounds don&rsquo;t surprise him.

&ldquo;If done, any dumping was probably due to the enthusiasm of getting the unit ready to redeploy homeward,&rdquo; he said.

Dunham said many airfields remained through the Korean War in case they were needed but were eventually transferred back to the landowners in the 1960s. They remained open for years after the war, he said, and locals often picked through them for whatever they could salvage. One boy apparently rode off with a gun across his bike&rsquo;s handlebars before authorities took it back, he said.

Dunham&rsquo;s digging is not cheap. Last year it cost roughly 3,000 pounds, or about $4,500. But for Dunham such a price is merely an inconvenience, not a barrier.

Before his death a few years ago, Dunham&rsquo;s father would tell him a story about when he was a child and the Yanks were still there.

One soldier had soldered an aircraft&rsquo;s steering wheel onto a bicycle, Dunham recalled. His father wanted that bike so badly, but the Yanks refused and buried it somewhere in the fields of Norfolk.

&ldquo;I&rsquo;ve never been able to find it as yet, but that doesn&rsquo;t mean I&rsquo;m not going to,&rdquo; he said.