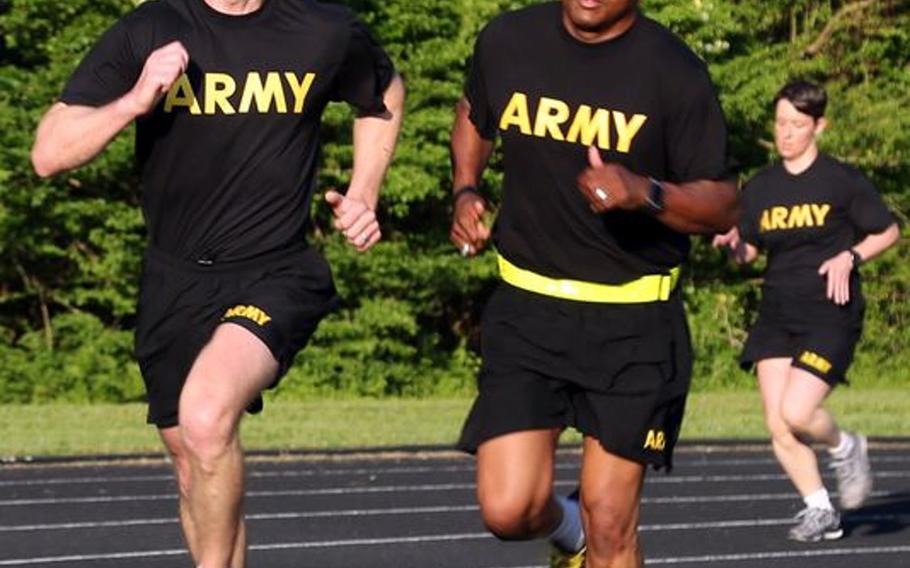 Sgt. Maj. of the Army Dan Dailey, left, conducts physical training with soldiers at Redstone Arsenal, Ala. in May 2015. Dailey, who took the position in January, has said he supports soldiers being able to wear black socks with their physical fitness uniforms. Current Army regulations state soldiers must wear plain white socks of at least ankle length. (Michael Zuk/U.S. Army)

Sgt. Maj. of the Army Dan Dailey, left, conducts physical training with soldiers at Redstone Arsenal, Ala. in May 2015. Dailey, who took the position in January, has said he supports soldiers being able to wear black socks with their physical fitness uniforms. Current Army regulations state soldiers must wear plain white socks of at least ankle length. (Michael Zuk/U.S. Army) 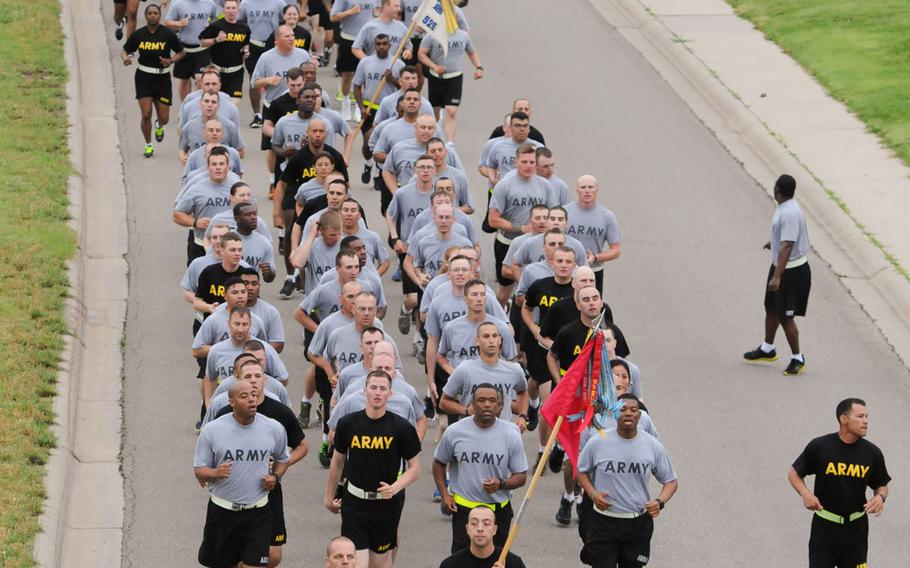 Soldiers with the 1st Infantry Division conduct a division run at Fort Riley, Kan., in June 2015. Currently, soldiers may wear either the gray Individual Physical Fitness Uniform or the black Army Physical Fitness Uniform, with a requirement that only the APFU be worn after 2016. Sgt. Maj. of the Army Dan Dailey has said he would support a move to give troops the option of wearing black socks with their APFU, and the issue has been a hot topic at town hall events with the SMA around the globe. (Amanda Stairrett/U.S. Army) 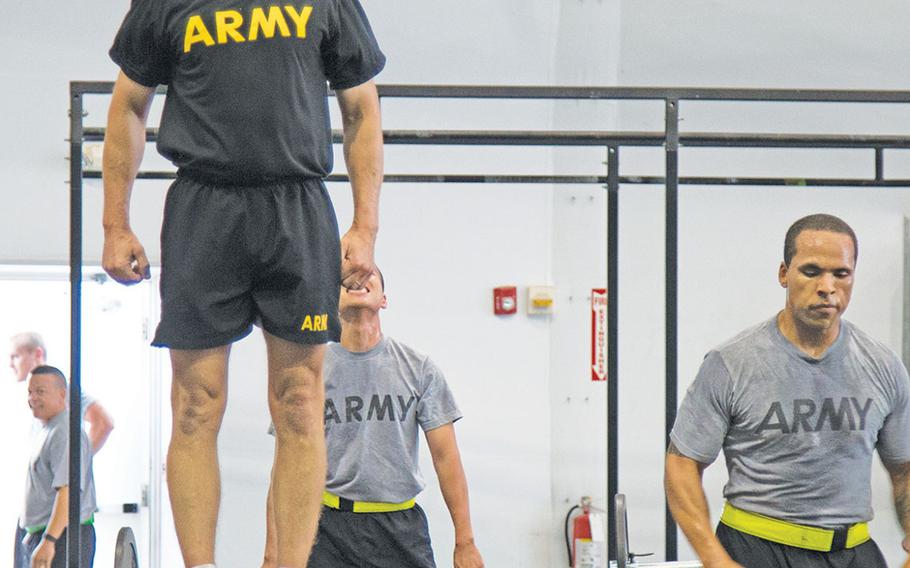 Sgt. Maj. of the Army Dan Dailey does physical fitness with soldiers at Fort Riley, Kan., during a visit there in early July 2015. With the transition to the new black Army Physical Fitness Uniform, which Dailey is wearing here, the SMA has said he supports giving troops the option of wearing black socks if surveys show most troops like the idea. (Jerry Griffis/U.S. Army)

Since becoming the top enlisted soldier earlier this year, Sgt. Maj. of the Army Dan Dailey has held town hall meetings throughout the world, explaining to soldiers his vision for the future of the force.

Of the wide range of topics that Dailey usually discusses with his enlisted charges, it’s uniform changes — most notably, the desire to wear black socks with the Army’s new physical fitness uniform — that elicit the strongest response.

The question of whether black socks will eventually be permitted to be worn with the mostly black PT uniform has come up at nearly every town hall event Dailey has hosted since June, when he asked soldiers at Fort Meade, Md., if they would prefer black socks with the new uniform.

Current Army regulations state that soldiers must wear “calf-length or ankle-length, plain white socks” with no visible logos as part of the new PT uniform. It is replacing the old Individual Physical Fitness Uniform, which featured a gray top and jacket, along with black shorts or pants.

Preliminary results of a survey sent out to more than 120,000 soldiers over the summer show that soldiers support the option of wearing black socks by a 2-1 ratio. Of the more than 12,000 responses from soldiers across all components — active duty, National Guard and Army Reserve — two-thirds were in favor of black socks, according to the Army News Service. The survey was closed on Aug. 31, and final results have not yet been released.

Dailey, who will be visiting major Army installations in Germany next week, has said he is willing to listen to the troops.

“If you can raise motivation by fixing things that don’t really have a negative effect on the standards and discipline of the Army, why not?” Dailey told the Army Times in late June.

Some soldiers who spoke to Stars and Stripes have opposing views on the issue.

Spc. Brad Kerner, with the 66th Military Intelligence Brigade out of Wiesbaden, said that the current white socks make the PT uniform look “dorky” and that he would like to have the option to wear black socks.

More practically, some enlisted soldiers said that black socks are easier to clean, especially after runs through mud or after a rain shower.

“You kind of notice that white socks turn gray, they don’t seem to look as clean,” said Sgt. 1st Class Luis Munoz, with the 18th Combat Sustainment Support Battalion out of Grafenwoehr.

But others called it a trivial issue with no real bearing on readiness or fitness.

“Black socks are not as readily available, and if it’s just a cosmetic thing, I don’t see it as being important,” said Staff Sgt. Drew Freeman with the 1st Military Intelligence Battalion in Wiesbaden.

“I don’t know why it’s an issue,” Downing said. “It’s the color of socks. It doesn’t change how fast you run. You can’t do more push-ups if your socks are black.”