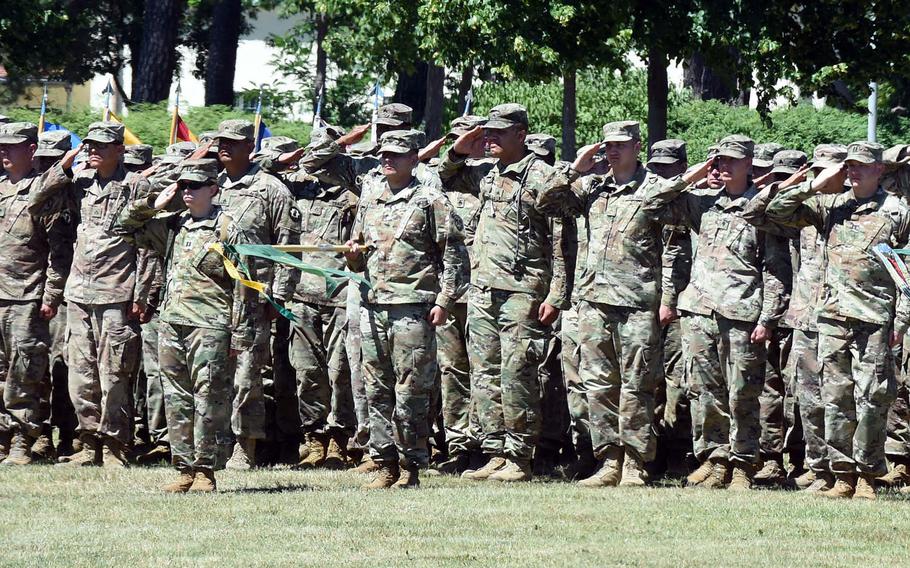 Soldiers at U.S. Army Garrison Bavaria salute during a ceremony rehearsal at Grafenwoehr, Germany, Thursday, June 27, 2019. The temperature was about 90 degrees at 3 p.m., according to a commonly used weather app. Soldiers in Germany were experiencing temperatures nearing 100 degrees on June 26. (Martin Egnash/Stars and Stripes)

STUTTGART, Germany — The military in Germany is sweatier than ever as record high temperatures bake base offices and homes, most of which are without air conditioning even as summer scorchers become more frequent.

But there is potentially good news for the Army in Europe: officials are looking at recent weather trends to see if policies that limit the use of air conditioning need to be modified.

The reason air conditioning isn’t everywhere on garrisons already is twofold: a desire to save energy costs and a view that the temperatures in Germany are not extreme in the summer.

“Based on historical ambient weather data, air conditioning is generally not considered appropriate for climate conditioning for U.S. installations in Europe, with the exception of Italy,” IMCOM-Europe’s current policy states.

From 2014 through this month, there were 98 days above 86 degrees in Kaiserslautern, the city where about 50,000 military Defense Department personnel and family members live in or near.

Central air conditioning in German homes is an extreme rarity, with most historically built to endure cold winters, though snowfall is typically light in Kaiserslautern.

About 60 miles to the city’s northwest at Spangdahlem Air Base, a family housing brochure states that air conditioning isn’t allowed in government units because homes “should be built to mirror units found in the off-base community.” Air Force installations in Germany also require waivers for air conditioning in hopes of cutting energy costs.

Ramstein said they don’t expect major changes to the base air conditioning policy, which is currently under revision.

“No one would deny that we have very hot days in Germany,” said Lt. Col. Kevin Parker, 86th Civil Engineer Group commander. “However, the number of days and severity, according to cross-service policy, do not warrant the expense of installing or maintaining comfort cooling.”

A January 2018 policy at Ramstein Air Base states that Kaiserslautern averages only 17 hours above 90 degrees and 48 hours above 85 degrees per year.

That data appears outdated. The average high temperature in Kaiserslautern from June, July and August from 2013 to 2018 was 91 degrees, according to a Stars and Stripes analysis using data from the Agricultural Meteorological Service Rheinland-Pfalz weather website. All but three months during that period had at least one day over 89 degrees.

“Extreme weather events have increased throughout Germany,” said Harald Hofstaetter, a technician with the weather service.

On Wednesday, Germany recorded its highest June temperatures in history, as the mercury rose to 101.5 degrees in parts of the country.

German authorities took the rare step of imposing speed limits on parts of the autobahn because of concerns that high speeds would warp the asphalt. It was the third year in a row they’ve done so.

Italy, which includes major Navy, Army and Air Force installations, is also experiencing temperatures upward of triple digits, but there are fewer restrictions on air conditioning there.

In Germany, however, Army personnel can’t add air conditioning units in their base homes or office spaces without permission.

Approval must first be granted by the local garrison department of public works director.

“The DPW can approve exceptions to policy in coordination with the garrison energy manager for communications rooms, health care facilities and secure facilities,” Johnson said.

Other requests require IMCOM-Europe review. For those, “approvals are generally granted if the justification validated/endorsed by the garrison DPW and is in line with the IMCOM-E policy,” Johnson said.

Multiple stores in Kaiserslautern had plenty of portable air conditioning units on sale a couple of weeks ago, but most were gone Thursday. Most units require a bucket to gather water and running an exhaust hose out of a window, which can let bugs and hot air back in a building without a separate window-sealing cover.

Meanwhile, the heat wave has altered some Army training operations.

To reduce the risk of fire, soldiers have stopped using tracer rounds on live-fire ranges at Grafenwoehr, home of the Army’s largest training area in Europe.

His advice for soldiers and civilian employees on base: Stay hydrated and go to air-conditioned places like the post exchange and the commissary during the hottest parts of the day.

Lack of tracers hasn’t affected Bavaria’s Hohenfels Training Area, which focuses on war games that do not use live ammunition, but officials there have pushed some training to later in the afternoon.

The heat wave comes as annual rates for heatstroke across the U.S. military have risen steadily from about three cases per 10,000 people in 2014 to nearly five per 10,000 last year, according to military data.

The command at Grafenwoehr has told leaders that making sure soldiers and others get enough water is “leadership 101,” Sutterfield said.

“We’re especially worried about at-risk groups of people, like pregnant women, children and the elderly,” Sutterfield said. “You should check on them and your fellow soldiers often during this [heat wave] to make sure they’re OK.”