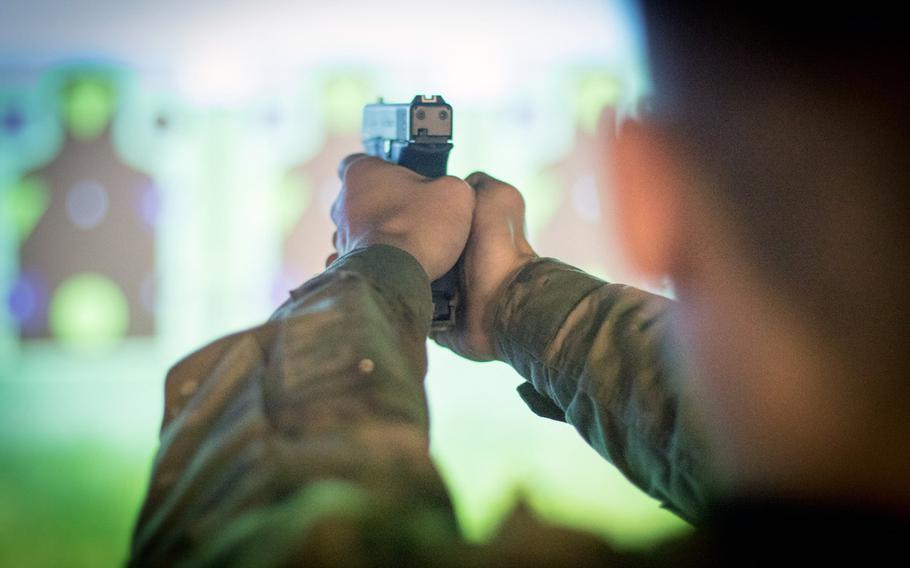 A soldier aims a pistol during training on the Army's Squad Advanced Marksmanship Trainer at Fort Drum, N.Y., in March 2019. The Army is revamping how soldiers train with small arm weaponry with tougher marksmanship tests. ( Phillip Tross/U.S. Army)

A soldier aims a pistol during training on the Army's Squad Advanced Marksmanship Trainer at Fort Drum, N.Y., in March 2019. The Army is revamping how soldiers train with small arm weaponry with tougher marksmanship tests. ( Phillip Tross/U.S. Army) 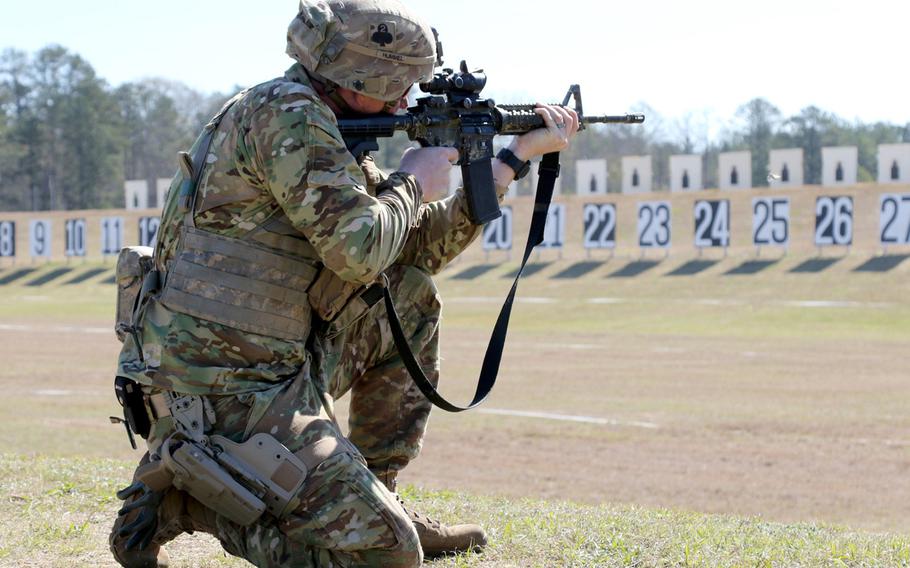 STUTTGART, Germany — The Army is revamping small-arms training with tougher marksmanship tests designed to better prepare troops — whether cook or infantryman — to shoot straight while under duress.

The new standards, which take effect in October, will change how troops train with pistols and automatic rifles, the Army said. The standards must be met by October 2020.

“It’s exactly what we would do in a combat environment, and I think it’s just going to build a much better shooter,” Sgt. Maj. Robert K. Fortenberry, of the Army’s infantry school at Fort Benning, Ga., said in a statement.

The aim is to get all soldiers to a “baseline” set of marksmanship skills that go beyond achieving just a passing score during routine weapons qualification testing. Rather than pulling from stacked pre-staged ammunition to hit targets, troops will now need to draw their gear as they would in conflict.

”Marksmanship training should also train soldiers on the other tasks they’d face in using their weapon in combat,” the Army release said.

Soldiers will be tested on whether they can rapidly load and reload as they would in combat, as well as quickly switching firing positions and making snap decisions on what targets to hit. Other new requirements include demonstrating proficiency in night combat conditions and simulated chemical attacks.

“You’re employing your weapon system in a more tactical environment or scenario, versus the more traditional way of doing it,” said Fortenberry. “And by doing so, it creates additional rigor, using all of the elements of critical thinking, sound judgment, adapting to change, all of those nontangible attributes.”

The Army also is eliminating timeouts when weapons malfunction during testing.

“You have to fix the malfunction,” Fortenberry said. Timeouts would only be authorized by leaders on a case-by-case basis, he said.

The new standards also require units to use indoor and electronic firing ranges as more affordable aids to instruction, rather than just relying on outdoor ranges.

“All units regardless of type will be held to the same new, tougher basic standards,” the Army said. “All will have to train the same skills, and ensure they schedule the same amount, type and frequency of marksmanship training mandated (by the new manual).”

In the past, the Army did not use a single approach to teaching marksmanship. The training overhaul pulls together all the individual weapons standards.

The Army said it spent about two years developing the program, drawing upon the expertise of nearly 200 marksmanship experts.

“It’s not to say that what we were doing in the past was wrong,” Fortenberry said. “We killed a lot of bad guys in Iraq and Afghanistan and all over the world with our current level of marksmanship training.”

However, the changes coincide with what the Army has learned over the past two decades about how to develop proficient marksmen, he said.