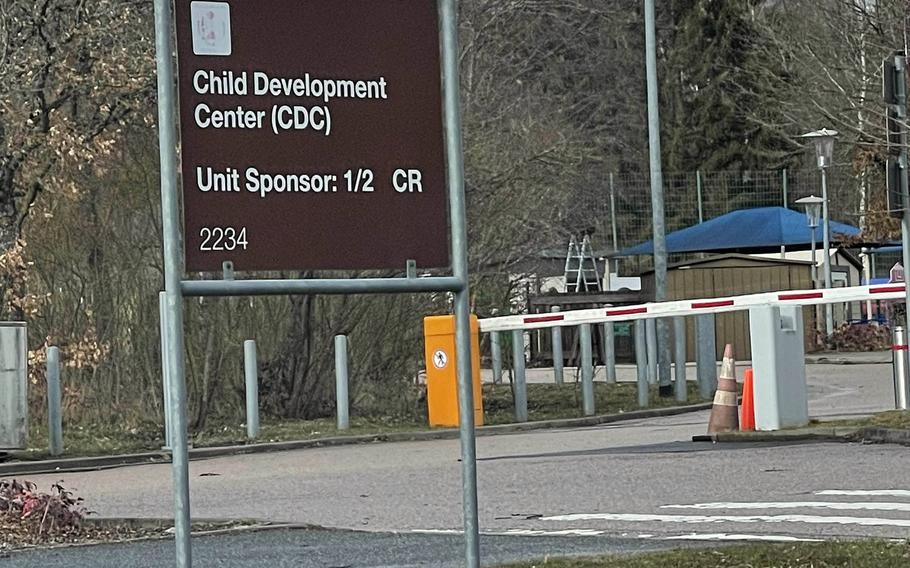 Buy Photo
The front of the Child Development Center on Rose Barracks, in Vilseck, Germany, March 15, 2021. U.S. Army Garrison Bavaria has asked German and military police to investigate allegations that staff at the CDC have mistreated young children in their care. (Immanuel Johnson/Stars and Stripes)

Army officials in Bavaria have asked law enforcement to investigate allegations that children at the Child Development Center at Vilseck have been mistreated by staff members.

“We take these allegations very seriously and, in accordance with Department of Defense policy, have engaged the Military and German law enforcement authorities to initiate an investigation,” garrison commander Col. Christopher Danbeck said in a statement Friday. It was sent to Stars and Stripes by the mother of a toddler who attends the CDC.

Susan Nelson, mother of 2-year-old Nico, said she called the CDC and the military police station at Vilseck last week, after a friend forwarded her a private message from a former CDC worker. The former worker previously had written an anonymous Facebook post that said children were being mistreated at Rose Barracks CDC.

The private message “detailed the abuse my son was receiving,” Nelson told Stars and Stripes.

Nico was recently diagnosed with expressive speech delay, which means he can understand what is being said to him but has difficulty expressing himself through language. Children with delayed speech development often communicate in other ways, including crying or aggressive behavior.

“We’ve been seeing all kinds of specialists for months and it’s always in the back of my head — I just hope they’re taking good care of him at the CDC,” Nelson said. “They were not.”

Nelson said she felt disbelief when she read the message her friend had sent her. “Then, I knew as a mother I had to fight for my son.”

Nelson has received hate mail since filing her complaint, she said.

While the CDC said hers was the first call they’d had about the alleged mistreatment, the MPs said they’d received 15 calls about the allegations in a single day, she said.

U.S. Army Garrison Bavaria confirmed that an investigation was in progress.

“We were made aware of the allegations last week,” garrison spokesman Donald Wrenn said Monday. “As per Defense Department policy, the CDC and Family and Morale, Welfare and Recreation reported to the appropriate U.S. and German authorities, and an investigation is underway.”

On Friday, a child psychiatrist diagnosed Nico with acute stress disorder, stemming from events that have happened in the last six weeks, Nelson said.

The person who made the accusations on Facebook told Stars and Stripes they have been taken off the work roster at Rose Barracks CDC. Since posting the claims, the accuser, who asked not to be named for fear of further reprisal, has filed a formal police complaint.

All CDC staff members named in the allegations have been reassigned to positions that don’t involve direct interaction with children until the investigation has been completed and a determination has been made about the truthfulness of the allegations, the garrison’s statement said.