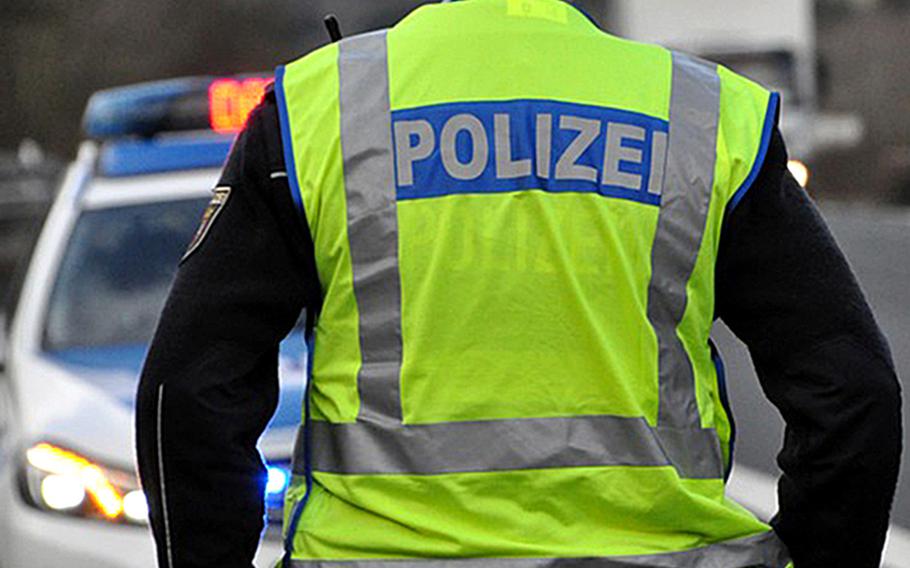 An Army civilian who fought off home invaders with a kitchen knife during an attempted robbery in Landstuhl, Germany, says he was fighting for his life and his family’s lives. (Courtesy of the German police)

The 41-year-old former Air Force major was reading a Sunday night bedtime story to his 5-year-old son and 3-year-old daughter when the doorbell rang.

Nighttime visitors were unheard of for the American family, who moved from Albuquerque, N.M., to Landstuhl, Germany, only four months ago and were still getting to know people. It was dark downstairs and he couldn’t see who was at the door, but he heard a muffled voice.

“Stupidly, I opened the door,” said the American, who contacted Stars and Stripes to describe his version of events and asked not to be identified by name for safety reasons. “They all rushed me.”

In an instant, the American said he was in a fight for his and his family’s lives. The confrontation lasted less than 10 minutes. One of the home invaders would later die of stab wounds. Now, the family of five is in protective custody, worried about possible recriminations from the attackers, some of whom are on the loose.

Meanwhile, the former major, who now works as an Army civilian employee, is being investigated by German prosecutors over whether he used excessive force in the fight.

“I am being investigated, so charges are still an option,” said the American, who has hired a German defense attorney over concerns that he could be in legal trouble.

In Germany, a conviction for causing death by bodily harm typically carries a prison term of no less than three years. German officials typically weigh whether force used was necessary for self-defense when deciding whether to prosecute.

But while the American said he is anxious about the outcome of the probe, the circumstances gave him no choice but to fight with force.

The fight ensuesAfter opening the door, a fight ensued as the American battled against the four men pushing into the house.

“I was trying to keep them at the door,” he said. The man’s wife, who had been tending to their infant upstairs, began walking downstairs when he screamed to call the police. The other children also were upstairs looking down as the men stormed in.

As the wife turned to run back up the stairs, one of the invaders slipped past and chased her. While the father fought, he heard his wife’s screams.

“She is screaming bloody murder, she’s screaming ‘my baby, my baby,’” he said.

“The whole time I am swinging,” he said. “I am pounding on anybody and everything that comes near me. I just fought like hell. I don’t know how I got the three guys back out the door.”

Luckily, German doors typically lock automatically when closed, but the door was glass and the father said he was worried they could break back in.

He then dashed to the kitchen, grabbed a knife off the drain board and charged upstairs screaming, “Where is he?”

The invader had pinned the wife down and was smothering her with one hand on her neck, the American said.

“No talk,” the invader kept saying in rudimentary English. Their infant, now awake, was crying. During the melee, their 5-year-old boy looked for a place to hide.

“He had seen one guy get past me,” the American said. He took his sister and hid under the bed. “I am amazed he had that in him. We’ve never practiced what to do in a situation like this. He thought his mom was getting killed by bad guys.”

Now armed with a knife, the father charged upstairs.

The invader then ran down the stairs. Concerned that he would let in the three other culprits, the American said he attacked as he chased after the man. The culprit managed to make it out the door, which shut before anyone could come back in.

At 7:49 p.m., the call was made to German police who were on the scene in minutes.

The burglars fled by car, but stopped in the village of Krickenbach, about 10 miles southeast of Landstuhl, German police said. They laid the 43-year-old injured man on the sidewalk. One of the suspects, the older brother of the injured man, asked a witness to call for medical help, officials said.

The wounded man died at the scene from blood loss related to puncture wounds, investigators said, citing an autopsy result. His 51-year-old brother was arrested and charged with attempted robbery. Both brothers are German nationals, the police said.

Police continue to search for the other two suspects who fled the scene.

“All the uniformed officers were completely behind me … they were coming up and saying they would have done exactly what I did.”

That night, the family was taken in for questioning, with the husband and wife driven separately to the station.

“I had to go in a car by myself, and the police officer put me in the front seat, and said in his opinion I’m the victim.”

“What I am being ... investigated for is excessive use of force in the situation,” the father said. “I haven’t met with anyone on the prosecution side yet.”

Prosecutor Iris Weingardt told Stars and Stripes on Tuesday that she could not say how long the probe will take. Facts needed to be gathered and “only then can a legal evaluation follow,” Weingardt said.