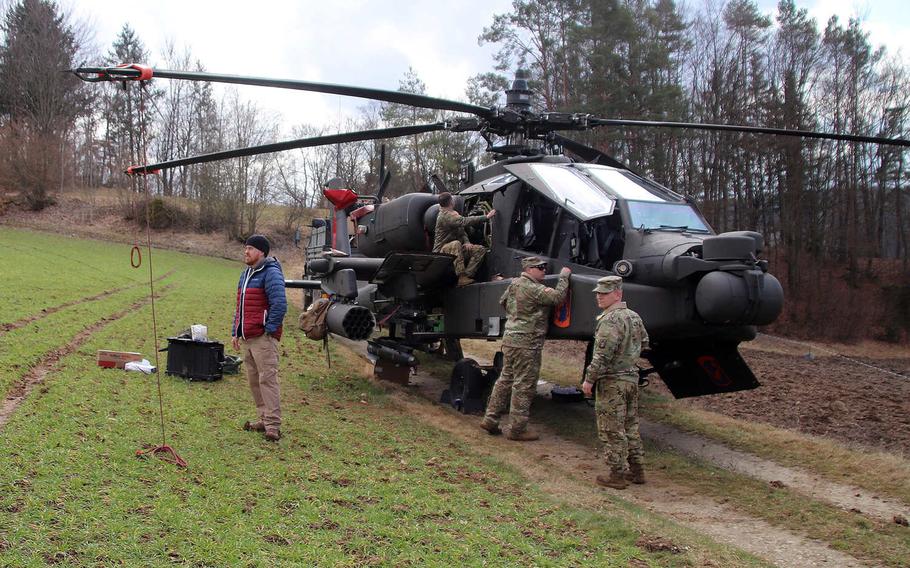 U.S. soldiers work on an AH-64 Apache helicopter March 18, 2021, in a field in Moritz, an area near Goessweinstein, about about 30 miles west of the Grafenwoehr Training Area, Germany. The Apache from the 12th Combat Aviation Brigade made a precautionary landing in the field March 17 after an indicator light came on in the cockpit. (Juergen Masching)

WEIDEN, Germany — A U.S. Army helicopter that made a precautionary landing in a Bavarian field two days ago flew back to its base in Katterbach on Friday, service officials said.

The Apache helicopter attached to the 12th Combat Aviation Brigade landed in Moritz, about 30 miles west of the Grafenwoehr Training Area, on Wednesday evening.

“A light came on indicating there was an issue and then (the crew) decided to land on a dirt road next to a field,” unit spokesman Maj. Robert Fellingham said on the phone Friday. “We sent the maintenance team out first thing the following morning.”

A faulty part was replaced, Fellingham said. The helicopter remained grounded until Friday due to poor weather, he said.

Both German authorities and military police were notified following the landing, Fellingham said.

The crew members were able to control the craft and determine the best spot to set down, which the brigade calls a precautionary landing, rather than an emergency landing.

There have been at least two other precautionary or emergency landings in Germany by Apache helicopters in recent years. In 2017, an Apache landed along a state road in a farmer’s field southeast of Stuttgart. In 2019, an Apache cut power lines and drew the ire of a protest group.

The landing Wednesday was far less contentious. A local restaurant delivered bratwurst and sauerkraut to the crew while they waited, Fellingham said.