Appointment-only shopping returns to Kaiserslautern as coronavirus numbers tick up 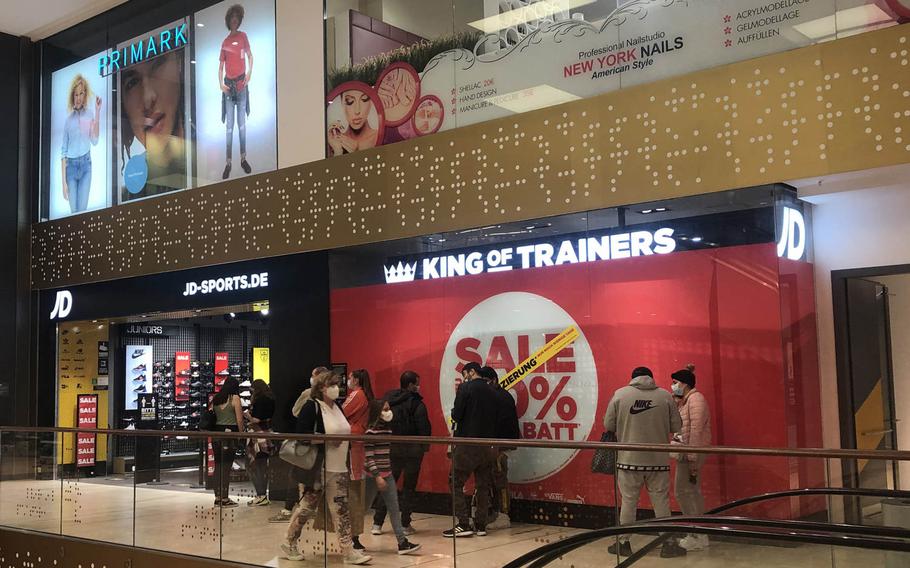 Buy Photo
People wait to enter a sports shop in the K in Lautern mall in Kaiserslautern, Germany, on Monday, March 29, 2021, hours before coronavirus restrictions on shopping in the district were due to take effect, following a spike in new infections. (Karin Zeitvogel/Stars and Stripes)

Buy Photo
People wait to enter a sports shop in the K in Lautern mall in Kaiserslautern, Germany, on Monday, March 29, 2021, hours before coronavirus restrictions on shopping in the district were due to take effect, following a spike in new infections. (Karin Zeitvogel/Stars and Stripes) 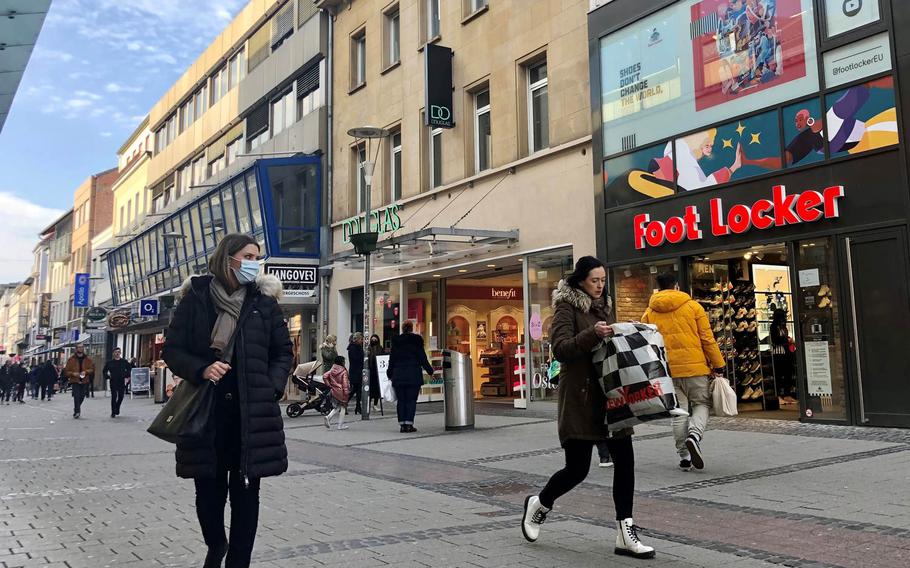 KAISERSLAUTERN, Germany — Most retail stores will require appointments for in-person shopping and sports activities will be limited after a spike in coronavirus infections in the district of Kaiserslautern, which houses a large U.S. military community.

The district, which includes Ramstein Air Base and several Army installations, had to “expand protective measures” after new infections climbed above 50 per 100,000 area residents and stayed there for three days in a row, district counselor Ralf Lessmeister said on Facebook over the weekend.

Key among the measures, which take effect at midnight Tuesday, are a return to appointment-only in-person retail shopping, and limits to who can take part in team sports.

Rehearsals and performances of “cultural events” are forbidden under the restrictions, which will remain in force until at least April 11.

U.S. military officials often take similar protective measures to those enacted at the regional or national level, but usually several days after the host nation.

As has been the case since the beginning of the pandemic last year, a number of retailers, including grocery and beverage stores, drug stores, pharmacies, outdoor markets, banks and gas stations are exempt from the restrictions. Customers must obey social distancing and face mask rules, and the number of people allowed into those businesses at one time is limited.

Hairdressers, flower shops, garden and hardware stores, which reopened in early March after weeks of closures, are also exempted from the new restrictions.

Amateur and leisure sports are authorized as long as they are practiced outdoors and involve non-contact sports in which no more than five people from two households take part. Non-contact team sports are allowed, but only for children aged 14 and under, with one coach, the rules said.

As of Monday, Kaiserslautern district had recorded just under 87 new infections per 100,000 over seven days, and the city had 42 per 100,000. Both are higher than Friday’s figures, when the district reported more than 50 new infections over three consecutive days, according to statistics posted by Germany’s public health agency, the Robert Koch Institute.

Two weeks ago, the district’s seven-day rate was just over 12 new cases per 100,000 and under 40 new infections per 100,000 in the city, according to data on Lessmeister’s official Facebook page.

The data do not include U.S. military personnel and their families, who make up at least a third of the county’s population.