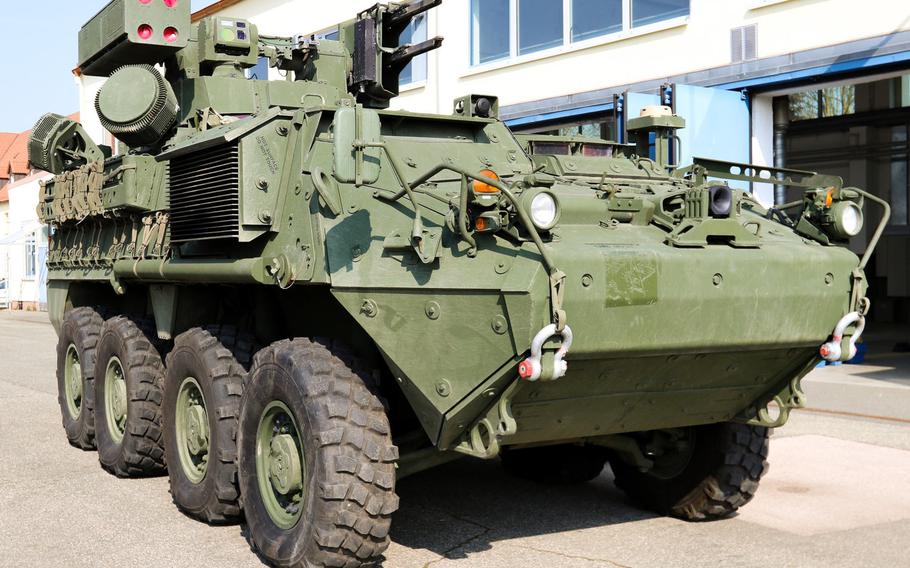 STUTTGART, Germany — A Germany-based U.S. Army unit is the first to field a new mobile air defense system that boosts the military’s ability to defend against threats while soldiers are on the move, the service announced.

The 5th Battalion, 4th Air Defense Artillery Regiment based in Ansbach will use the Maneuver Short Range Air Defense system, known as M-SHORAD, mounted on its Stryker A1 vehicles.

The system will “defend maneuvering forces against unmanned aircraft systems, rotary-wing and fixed-wing threats,” the Army said in a statement Friday.

The Ansbach regiment, which falls under the 10th Army Air and Missile Defense Command, received four systems and is slated to receive more this year as it transitions from an Avenger air defense-based battalion to the first fully operational M-SHORAD battalion in the Army, the service said.

Adding firepower in Europe has been a priority for the Army, which has bolstered capabilities on the Continent over the past several years in connection with concerns about a more aggressive Russia. Air defense has been a particular focal point.

“Our adversaries have invested heavily from their indirect fire up to their strategic missile assets, necessitating the modernization of our air and missile defense capabilities,” Brig. Gen. Gregory J. Brady, head of the 10th Army Air and Missile Defense Command, said in a statement. “M-SHORAD is a critical part of the Army’s comprehensive dedicated Air Defense Artillery capacity and augmented combined arms approach to be able to provide a multi-layered defense against all aerial threats.”

The Army fast-tracked the development of M-SHORAD, which resulted in a prototype within one year. The Army is expected to field the M-SHORAD system to four additional battalions later this year.