Annual fun run to tie up traffic in Kaiserslautern Thursday 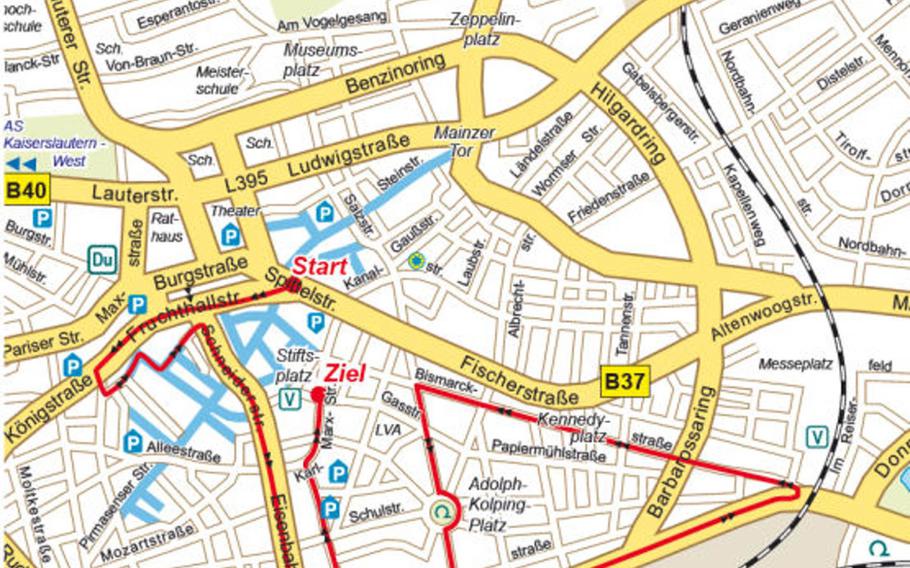 Route of the annual five-kilometer (about three-mile) Firmenlauf, or Company Run, to be held in Kaiserslautern on Thursday, May 21, 2015. Streets in town will be closed starting at 4 p.m., and drivers can expect delays and traffic congestion until about 8 p.m. (Courtesy n plus sport GmbH)

As the runners pass, segments of the five-kilometer (about three-mile) route will be reopened. The Kaiserslautern police warned that drivers should expect traffic delays and closures until about 8 p.m. Driving in and out of some of the garages downtown also will be prohibited during the road closures, including the garages at Stiftsplatz, Lutrinastrasse, Loewenstrasse and Kreissparkasse, according to the police. Some bus lines will also be affected.

The route starts at the foot of St-Martins-Platz on Spittelstrasse and goes past the Fruchthalle, then turns in toward the pedestrian zone and onto Eisenbahnstrasse, Barbarossastrasse and Bismarckstrasse, before the route ends near the Stiftsplatz, where an after-run party will feature live music, food and drink. Prizes will be awarded for largest turnout from a particular business and best costume, among others.

More than 7,000 runners from 412 businesses took part in last year’s run, according to organizers.