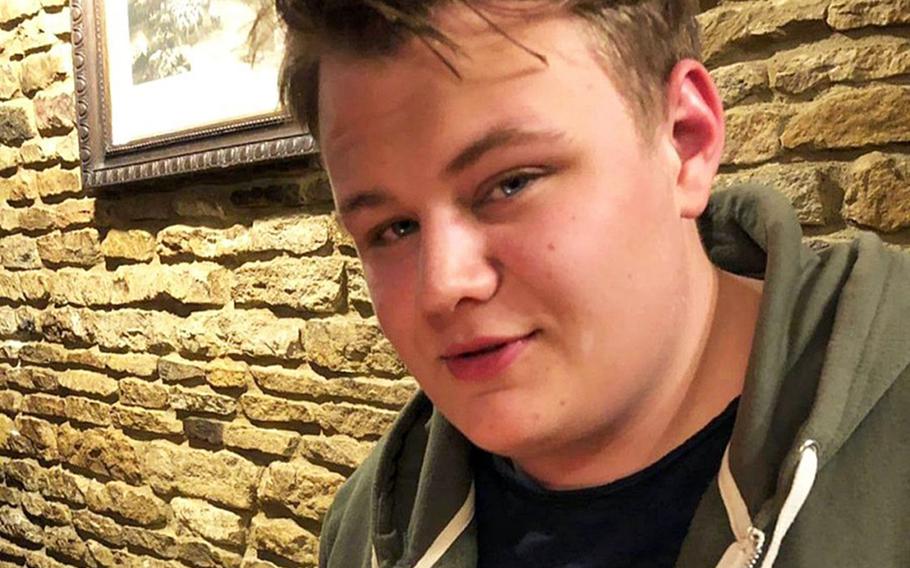 A photo of Harry Dunn, the British teenager killed in a 2019 traffic accident, from the Justice4Harry Facebook page. (FACEBOOK)

RAF MILDENHALL, England — An American woman who fled England and claimed diplomatic immunity after killing British teen Harry Dunn in a traffic accident near RAF Croughton has offered to do community service in his memory, her lawyer said.

“We understand that community service is a typical sentence for offenses like this,” attorney Amy Jeffress, who is representing Anne Sacoolas, told the BBC in an interview that aired Tuesday.

“We have offered ever since over a year ago that she would be willing to serve that kind of a sentence and to make a contribution in Harry’s memory, to take other steps to try to bring some peace to the family,“ she said.

Sacoolas was driving on the wrong side of the road after leaving RAF Croughton, where her husband worked, in August 2019 when she struck 19-year-old Dunn head-on as he rode his motorcycle. Dunn died of his injuries in a nearby hospital.

Sacoolas was charged in England with death by dangerous driving, which carries a maximum sentence of 14 years in prison. Punishments for vehicular manslaughter, the rough equivalent in the U.S., vary between states and based on the circumstances.

An accident like the one that killed Dunn would not be prosecuted criminally in the U.S., Jeffress said.

“In the United States, these cases are only prosecuted where there is evidence of recklessness that rises to the level of close to intent – drunk driving, distracted driving, a hit-and-run situation or excessive speeding,” she said. “But there was none of that here.”

Dunn’s mother, Charlotte Charles, told the BBC Tuesday that Sacoolas “needs to come back to face the U.K. justice system.” But the U.S. has rejected a British extradition request.

Sacoolas wants to resolve the case without returning to the U.K., Jeffress said.

She initially claimed diplomatic immunity as her husband’s dependent but recent news reports have said she was also working for the U.S. government in England.

RAF Croughton is a military base near Oxford that is home to an intelligence station operated by the U.S. Air Force. The base also includes State Department employees.

A Red Notice is a request to law enforcement worldwide to locate and provisionally arrest a person pending extradition, surrender or similar legal action.

Member countries submit requests for Red Notices to Interpol and decide whether to make them public, the International Criminal Police Organization told Stars and Stripes.

A search for Sacoolas’ name on Interpol’s website Wednesday found nothing, but most red notices are “restricted to law enforcement use and not published,” Interpol said.

Last month, a Virginia federal court ruled that a civil lawsuit filed by Dunn’s family against Sacoolas could proceed.