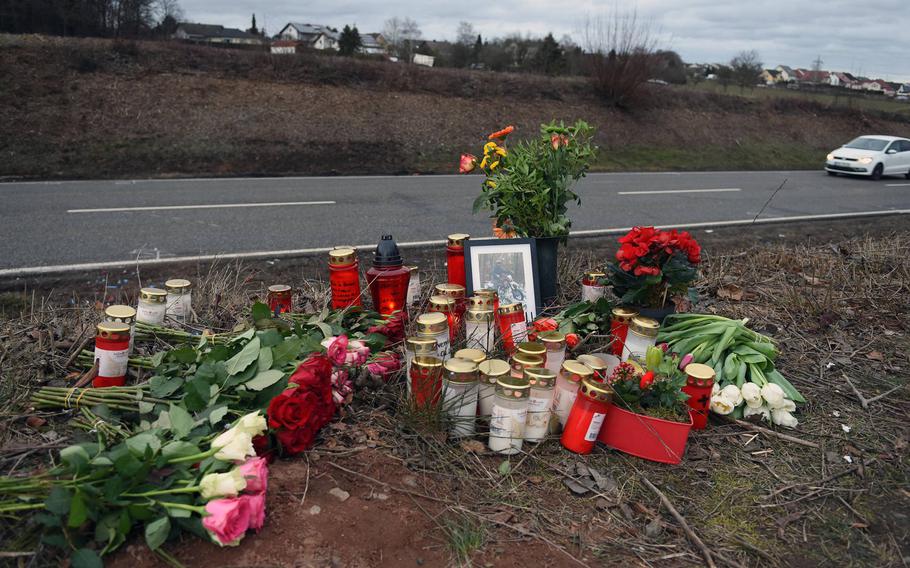 Buy Photo
A roadside memorial of flowers and candles was created for David Wirsching, a German teenager killed in a car crash near Weilerbach, Germany, in February 2019. (Jennifer H. Svan/Stars and Stripes)

KAISERSLAUTERN, Germany — The Ramstein airman who avoided dismissal and jail time after his negligent homicide conviction for the death of a German teenager in a 2019 car crash was administratively discharged from the service last month, Air Force officials said.

He was involuntarily separated “due to his commission of a serious offense” in violation of military law, Powell said.

Brig. Gen. Josh Olson, the wing commander, approved the separation after a review process “consistent with service instructions” and one that considered Roman Bahena’s “potential for future useful military service, which is a separate and distinct question from whether any particular punishment is warranted at a court-martial,” Powell said.

Roman Bahena’s sentence angered some in the German community, who said it was too light, and prompted two German lawmakers to call for greater legal control of criminal cases involving U.S. troops.

Roman Bahena was demoted two ranks and ordered to perform three months of hard labor without confinement. The offense allowed a maximum prison sentence of three years and a bad conduct discharge.

At his trial last year in July at Ramstein, Roman Bahena was found to be traveling at an excessive speed in his Chevrolet Camaro on the L367 when he slammed almost head on into a Piaggio Ape driven by 17-year-old David Wirsching of Weilerbach, who died instantly. The crash occurred between Mackenbach and Weilerbach, two villages a few minutes’ drive from the east gate of Ramstein Air Base.

Jurors acquitted Roman Bahena, who was 21 at the time, of the more serious charge of involuntary manslaughter and afforded him a second change in the Air Force.

Noncommissioned officers who trained Roman Bahena in the 86th Aircraft Maintenance Squadron testified that he was “quick to learn” and called him “an extraordinary airman and crew chief.”

Roman Bahena was given a general discharge under honorable conditions, Powell said.

Such a discharge is considered appropriate if a member’s service “has been honest and faithful” but negative aspects of his or her record or conduct outweigh the positive, according to The Military Command and the Law, an Air Force legal publication described as a helpful reference guide on military law for commanders.

Under a general discharge, a service member may still qualify for most veterans benefits but usually won’t be allowed to reenlist or enter a different branch of military service or qualify for GI Bill education benefits.