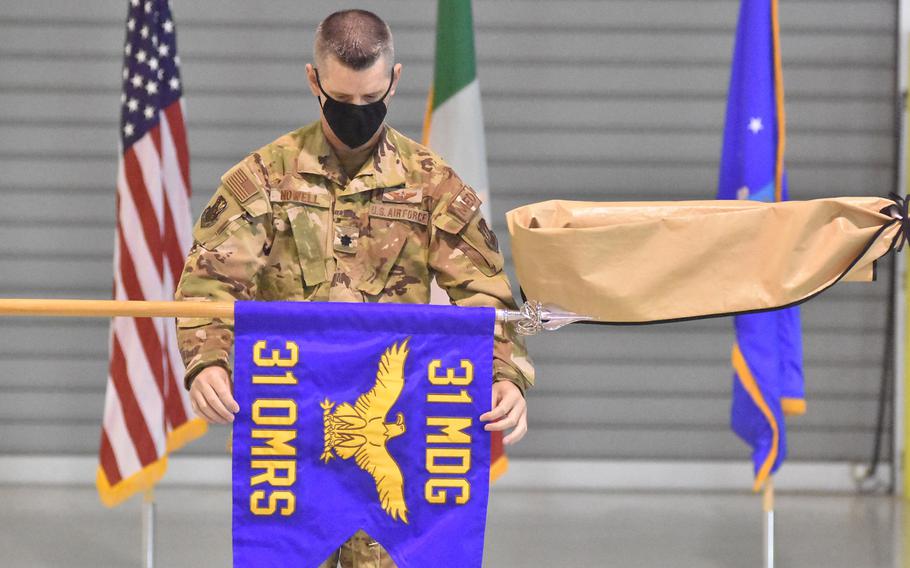 Buy Photo
Lt. Col. Clifton Nowell presents the flag of the newly designated 31st Operational Medical Readiness Squadron during a ceremony in October at Aviano Air Base, Italy. The squadron, formerly known as the 31st Aerospace Medical Squadron, will serve the active-duty population on base. (Kent Harris/Stars and Stripes)

Buy Photo
Lt. Col. Clifton Nowell presents the flag of the newly designated 31st Operational Medical Readiness Squadron during a ceremony in October at Aviano Air Base, Italy. The squadron, formerly known as the 31st Aerospace Medical Squadron, will serve the active-duty population on base. (Kent Harris/Stars and Stripes) 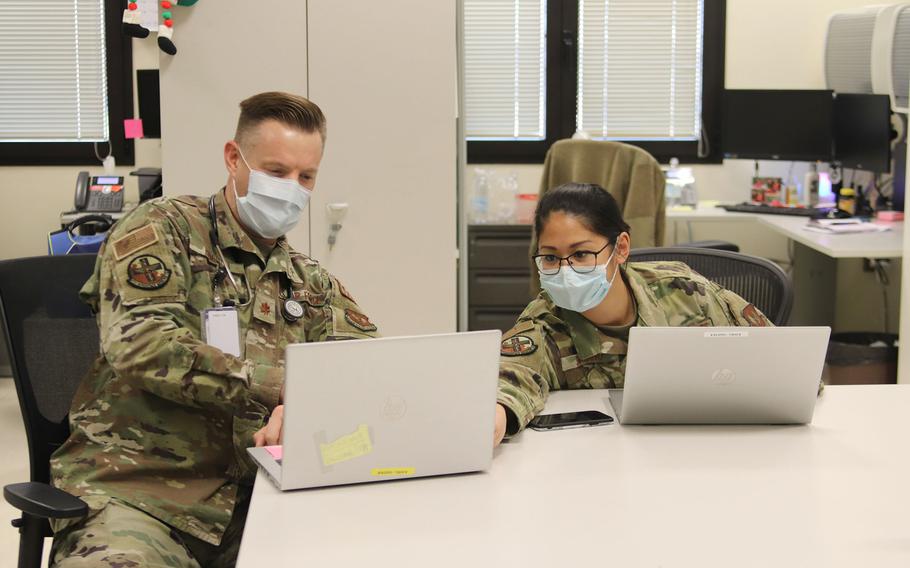 Buy Photo
Maj. Jason Hamilton and Capt. Sarah Soriano review records at the newly redesignated Warrior Medical Clinic at Aviano Air Base, Italy. Under a recent change, doctors with the 31st Operational Medical Readiness Squadron are now responsible for care of specific units instead of the general base population. (Norman Llamas/Stars and Stripes) 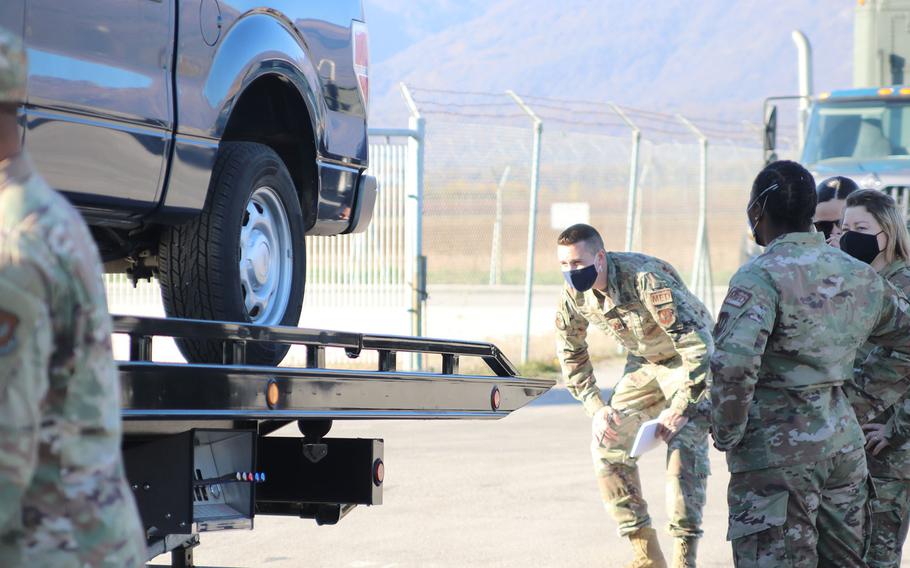 Buy Photo
Dr. (Maj.) Ryan Parks, with the newly redesignated 31st Operational Medical Readiness Squadron, watched airmen with the 31st Logistics Readiness Squadron at work on Thursday, Nov. 20, 2020. Parks is now responsible for the care of the squadron and several others on base. (Norman Llamas/Stars and Stripes) 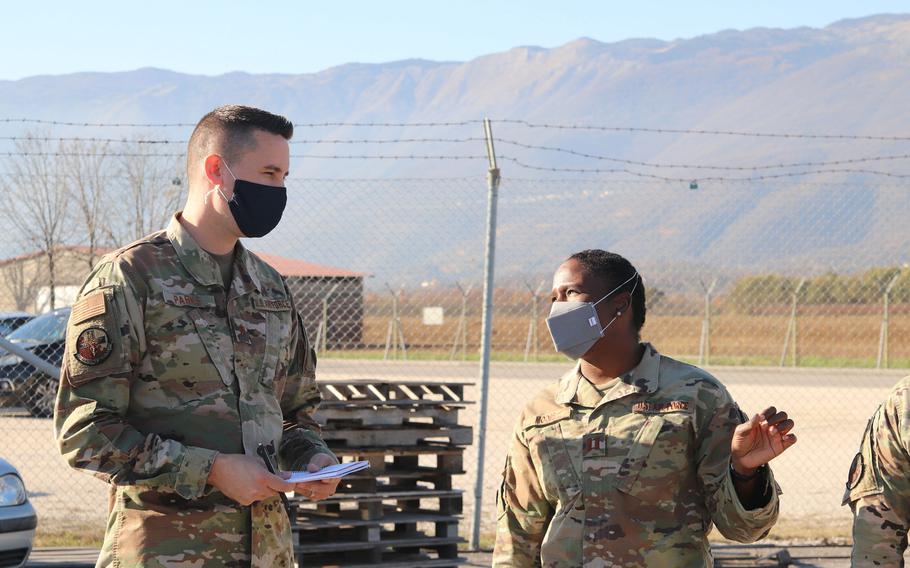 Buy Photo
Dr.(Maj.) Ryan Parks, left, and Capt. Laquita Moore talk while observing members of the 31st Logistics Readiness Squadron at work on Thursday, Nov. 20, 2020. Parks and Moore, of the 31st Operational Medical Readiness Squadron, are now responsible for the care of individual units instead of the general base population. (Norman Llamas/Stars and Stripes)

AVIANO AIR BASE, Italy – Dr. Ryan Parks isn’t an expert on what kinds of stress airmen with the 31st Logistics Readiness Squadron put on their bodies each day.

But he’s about to become one, or at least have a much better idea.

Parks, an Air Force major, is transferring with two other doctors from Aviano's sprawling base clinic on Area 1 to the smaller Warrior Medical Clinic on the flight line.

The move is part of a worldwide Air Force push to put doctors closer to where airmen work in a bid to save time, reduce work-related injuries and keep commanders better informed about their personnel’s deployment status.

To do that, Parks and others assigned to the 31st Operational Medical Readiness Squadron have switched their focus from the general base population to specific units on base.

The Air Force started adjusting its medical groups in the U.S. first and is now doing the same overseas. Aviano redesignated two of its four medical squadrons in October and began the process earlier this month.

Parks was at Mountain Home Air Force Base in Idaho when it went through the transformation. The number of nondeployable airmen was reduced by 34%, he said.

“I’m hoping we can achieve similar results here,” he said.

Col. Wade Adair, the group commander, didn’t talk about specific goals or numbers during a recent interview. But he has high hopes for the new structure being more efficient.

“Each individual case has unique needs,” he said. But that’s more pronounced when a doctor has a daily schedule of seeing a mix of active-duty, military dependent or retiree patients. Active-duty patients generally require more time due to extra rules and paperwork.

Because airmen at Aviano will be receiving most of their basic care closer to where they work – the two clinics are about a 20-minute drive apart – they’ll get to spend more time on the job, Adair said.

Some specialized care will remain at the larger clinic, but much of that is already referred off base since the base hospital was redesignated as a clinic under a Defense Department-mandated reduction of military hospitals in 2017. All dental care remains at the larger complex as well.

Aviano saw an average of almost 4,000 outpatient visits a month in 2019, Adair said. That number has fallen this year, mostly because of a move toward virtual treatment in an effort to stem the spread of the coronavirus.

Doctors assigned to the 31st Health Care Operations Squadron – who will handle civilian patients – have about 20% fewer patients than they did before.

“In normal operating conditions, this would increase access to care for dependents,” he said.

And since a goal of preventive medicine is reducing visits for airmen as well, doctors looking after active-duty personnel could spend more time visiting troops on the job and meeting with squadron commanders.

Adair said he’d love to have more doctors under his command, but that’s not going to happen. So he said refocusing the attention of those he does have is the best solution.