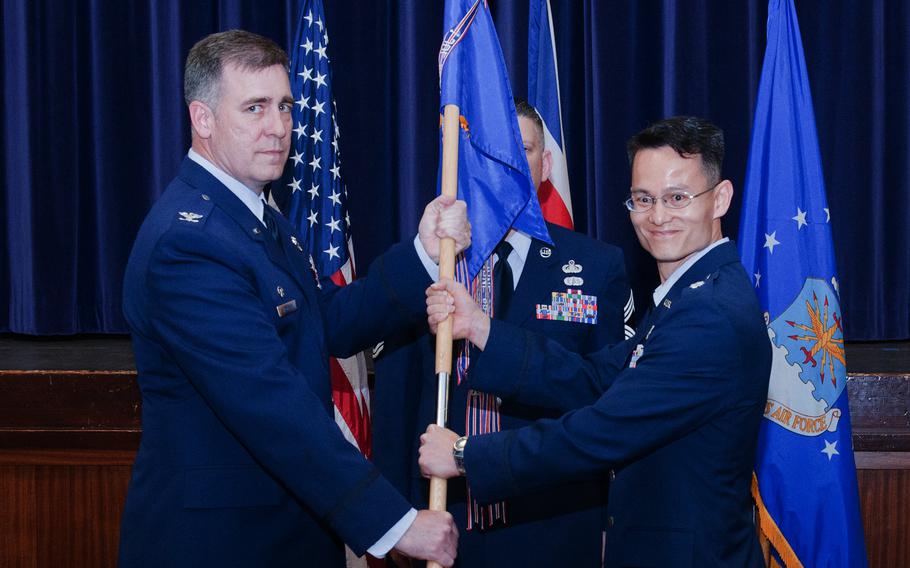 Lt. Col. Matthew Olson, right, assumes command of the 422nd Communications Squadron from Col. Charles Hamilton, left, 422nd Air Base Group commander at RAF Croughton, England, on July 8, 2013. Olson and Hamilton were relieved of their commands on Thursday after an investigation raised questions about their abilities. (Brian Stives/U.S. Air Force)

RAF MILDENHALL, England — Two U.S. Air Force commanders in the 422nd Air Base Group at RAF Croughton have been relieved over a loss of confidence in their abilities.

Col. Charles Hamilton, who commanded the base group since 2011, and Lt. Col. Matthew Olson, who commanded the 422nd Communications Squadron since July, were relieved of command on Thursday by the 501st Combat Support Wing commander after an investigation, officials said.

“It was loss of confidence in the commanders’ abilities to lead their units in the best interest of the Air Force,” spokesman Capt. Brian Maguire said in an e-mail. “This action was more about leadership style and organizational climate than a specific event.”

Maguire said there was no connection between the two sackings and that the two men were not under criminal investigation.

Col. Angela Cadwell, 501st commander, said in an email that her primary focus was the “health, welfare and organizational climate” in the wing. She did not elaborate.

Croughton provides communication and computer support to military assets throughout Europe. The base came under public scrutiny last year when it was reported that British Telecom would provide a telecommunication link between Croughton and a base in Djibouti connected with unmanned aerial vehicle operations.