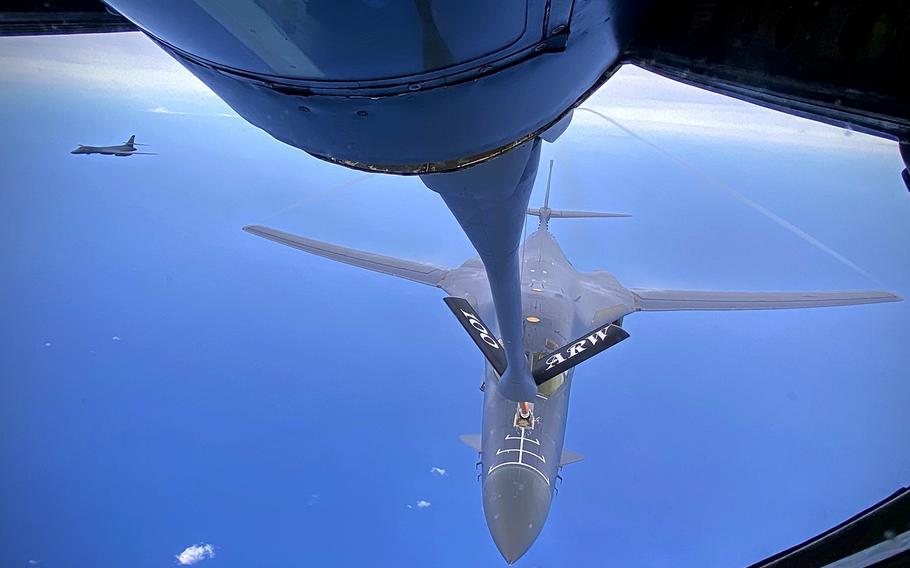 A B-1B Lancer flies with a Danish F-16 during a training mission for Bomber Task Force Europe, May 5, 2020. (Danish air force)

Two B-1B Lancers arrived in the Baltics to work with NATO allies this week, marking the heavy bombers’ first flights to Europe in about 18 months.

The training also included overflights of Lithuania and Latvia.

The strategic bombers participated in the “Spring Storm” military exercise, the Estonian Defense Ministry said in a statement.

“It is important that our allies understand that security cannot be put on pause for the duration of the pandemic,” Estonian Defense Minister Juri Luik said Tuesday, the Baltic Times newspaper reported.

The Lancers were last in Europe in November 2018 supporting NATO’s Trident Juncture exercise.

Strategic bomber deployments to Europe have become more frequent in recent years, amid U.S. and European concerns about potential Russian aggression. In March, a flight of B-2 stealth bombers participated in a series of training operations on the Continent. And last August, the Air Force deployed a similar B-2 bomber task force to Europe.

The Air Force did not say how long the Lancers would remain in Europe.

The Europe mission for the variable-wing Rockwell jets came just after B-1B bombers from Texas flew to the Western Pacific region.

Four B-1Bs from Dyess Air Force Base arrived in Guam on Friday to conduct training and operations with allies and partners, the Air Force said.