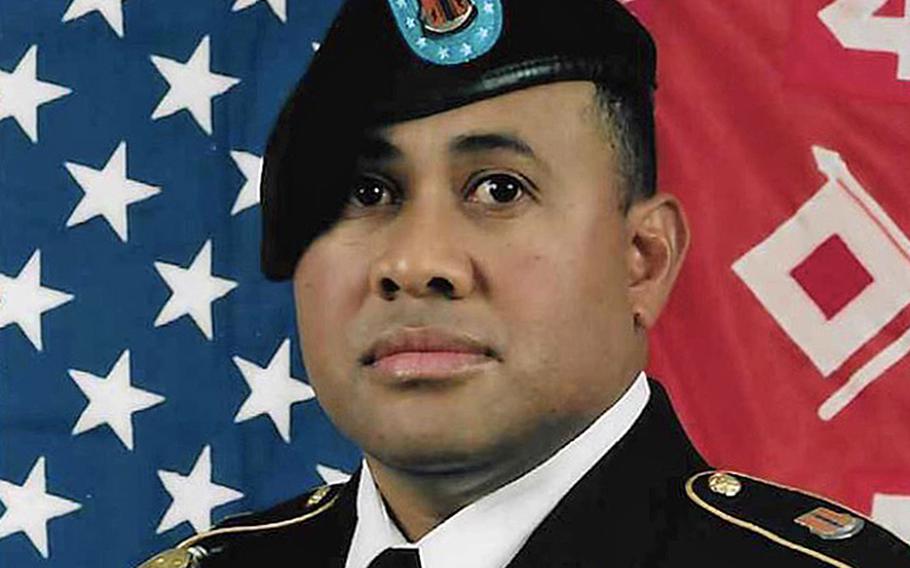 Sgt. Setariki Korovakaturaga, 43, with the 2nd Theater Signal Brigade in Baumholder, Germany, died of COVID-19 while being driven to the hospital last week, U.S. Army Europe and Africa confirmed on Dec. 15, 2020. (U.S. Army)

KAISERSLAUTERN, Germany — A Baumholder soldier who collapsed while being driven to a military hospital last week died of coronavirus complications, the Army confirmed Tuesday.

Sgt. Setariki Korovakaturaga, 43, had “previously tested positive for COVID-19 and was at home on quarantine when he began experiencing increased symptoms,” U.S. Army Europe and Africa said in a statement.

“He died en route to the hospital,” the statement said.

He is the first soldier assigned to USAREUR-AF to die of COVID-19, the command said.

He is also the first active-duty soldier to die from the disease caused by the coronavirus.

Korovakaturaga left behind a family, the statement said.

In a lengthy Facebook post on Saturday, his wife, Andrea, thanked him for being “the best boyfriend, husband, lover to the core.”

The couple married in May 2014, public records show, but her post appeared to mark an anniversary.

She recalled how, in previous years, they would go out to dinner somewhere fancy and return home to watch a documentary or rugby highlights while talking about their relationship.

They had no special plans to celebrate the anniversary this year due to their “isolation situation,” she said, but she woke up “with deep sadness” that he was not there with her and the children.

“I felt you in my dream today and was that you tapping my forehead??” she wrote. “I am so heartbroken to lose you Seta, I love you today, tomorrow and for the rest of my days.”

His smiles would melt her heart and shake “my whole body to the core of my soul,” she wrote, promising to always celebrate their marriage and memories for as long as she lives.

“I miss you so so much,” she wrote. “Please be with me and the children while we journey on to lay you to rest where we had always planned to settle down.

“Happy anniversary in Heaven My Love.”

His wife was driving him to the hospital on Dec. 9 when he had trouble breathing and collapsed in the passenger seat, a German police spokesman told Stars and Stripes last week.

German first responders revived him with aid from his wife in the village of Oberstaufenbach, between Baumholder and Kaiserslautern. A helicopter landed in the street to airlift Korovakaturaga to the hospital, and firefighters and U.S. military police assisted as well, but the soldier died at the scene, the German police spokesman said.

“We were shocked and deeply saddened by the sudden and tragic loss of Staff Sergeant Setariki Korovakaturaga last week,” Lt. Col. Jason Kendzierski, 44th Expeditionary Signal Battalion commander, said in the statement. He called Korovakaturaga a “tremendous soldier and teammate in our unit.”

“Our thoughts and prayers are with his wife and children,” he said. “The outpouring of support from the community has been heartwarming and is indicative of how much he will be missed throughout the formation and community.”

A memorial service for Korovakaturaga is scheduled to be held Thursday, said USAREUR-AF.

Stars and Stripes reporters Chad Garland and Marcus Kloeckner contributed to this report.