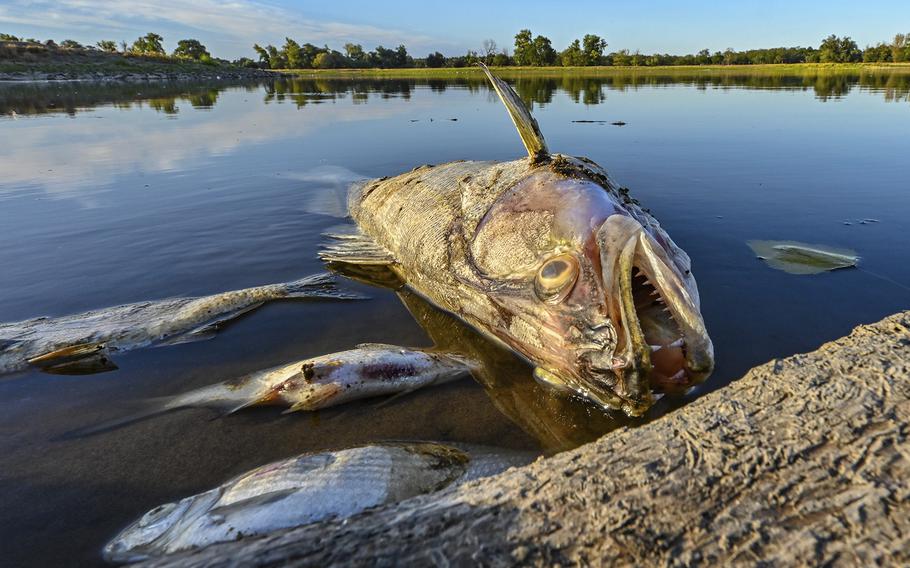 Dead fish float in the shallow waters of the German-Polish border river Oder near Genschmar, eastern Germany, on Friday, Aug. 12, 2022. Huge numbers of dead fish have washed up along the banks of the Oder River between Germany and Poland, sparking warnings of an ecological disaster but no clear answers yet about what the cause could be. (Patrick Pleul/dpa)

Vast amounts of chemical waste were probably dumped into a river on the Polish-German border, Poland's prime minister said Friday, killing tons of fish and creating an ecological disaster that could take years to clean up.

Authorities said 150 Polish troops have been deployed to the 522-mile-long Oder River, which flows through Poland, Germany and the Czech Republic, to launch a cleanup operation. The chemical spill was likely intentional, Prime Minister Mateusz Morawiecki said on a podcast Friday.

"It is likely that enormous amounts of chemical waste have been dumped into the Oder River, and this was done with full awareness of the risks and consequences," Morawiecki said. "We will not let this matter go, we will not rest until the guilty are severely punished."

German water samples from the region revealed elevated levels of mercury, according to local media, but authorities are still investigating the source of the spill. Scientists have speculated that there might be other causes for the mass fish deaths, including climate change. The Polish troops set up a barrier along the river to catch the dead fish, and warned local residents not to bathe in the water or eat fish caught in contaminated parts of the river.

Environmental groups have criticized Poland's government for its slow response to the contamination, which local fishermen noticed in late July. The German environment ministry said Warsaw did not officially inform Berlin of the disaster until Thursday, weeks after the dead fish first appeared.

"We know that the chain of reporting that's envisaged for such cases didn't work," environment ministry spokesperson Christopher Stolzenberg told reporters, according to the Associated Press.

"An environmental catastrophe is looming," German Environment Minister Steffi Lemke told the RND newspaper group. "All sides are working flat out to find the reasons for this mass [killing of fish] and minimize potential further damage."

Video posted on social media shows fish piled up and floating along the river bank. Local fishermen say they have been hauling dead fish and beavers out of the water for weeks.

Scientists have speculated that factors beyond deliberate dumping could be at play. The mercury could have settled in the river's sediment due to past pollution, before being stirred up by recent dredging. Europe's historic heat wave this summer could also be to blame. The continent is facing what is potentially its worst drought in 500 years; low water levels and high temperatures could be choking off oxygen supplies to the river's aquatic life and worsening existing pollution.

"This is a problem we will increasingly face as we move into a world affected by climate change. Pollutants that are out there are more toxic because they are present in higher concentrations during drought conditions," said David Taylor, a professor of environmental change at the National University of Singapore.

"We are in this strange period now, where we are beginning to see . . . not just the direct effects of climate change, such as droughts and storms, but also the knock-on effects."

In 2016, Vietnam blamed a steel plant on its coast for a toxic waste spill that killed some 100 tons of fish, in what has been called the country's worst environmental disaster. The spill contaminated 125 miles of coastline and left many fishermen in the region jobless. An internal government report found that the plant, run by Taiwan's Formosa Plastics Group, had committed more than 50 violations, according to Reuters.

On Friday, Polish Prime Minister Morawiecki fired the head of the National Water Management Agency, after 20,000 people signed a petition urging the dismissal. He also sacked the chief inspector of the country's Environmental Protection Agency for not acting quickly enough.

"The situation we are dealing with was in no way foreseeable, but certainly the responsible agencies could have acted faster," he said in a Facebook post.