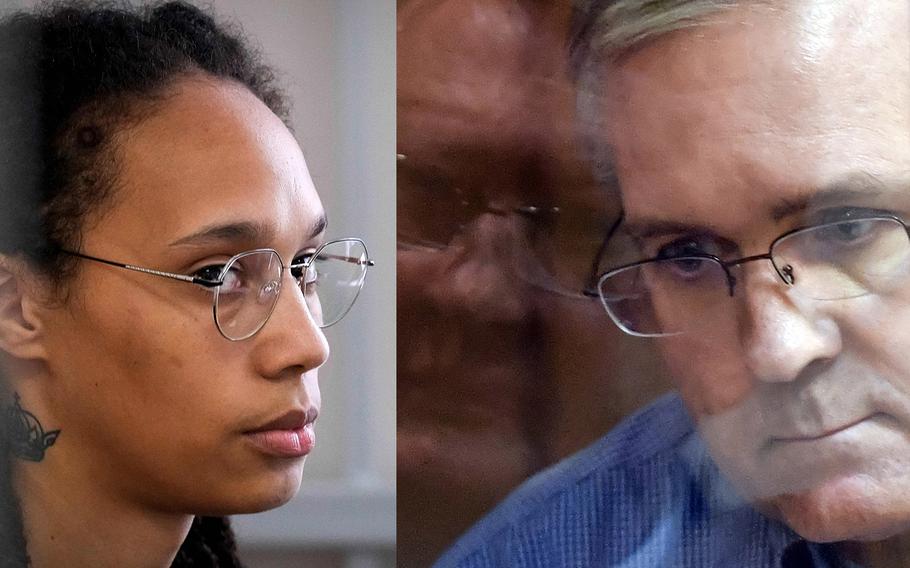 At left, U.S. WNBA basketball superstar Brittney Griner sits inside a defendants’ cage before a hearing at the Khimki Court, outside Moscow on July 27, 2022. At right, Paul Whelan, a former U.S. Marine accused of espionage and arrested in Russia, listens to his lawyers while standing inside a defendants’ cage in a Moscow courtroom during a hearing on Jan. 22, 2019. (Alexander Zemlianichenko (left) and Mladen Antonov (right), Pool/AFP/Getty Images/TNS)

(Tribune News Service) — Moscow is leaning toward rejecting a prisoner swap unless it gets two Russians in return for the two Americans the U.S. wants released, according to people familiar with the Kremlin’s thinking.

The U.S. has called on Russia to free WNBA player Brittney Griner and former U.S. Marine Paul Whelan, offering to free convicted arms dealer Viktor Bout. Discussions have been stop-start since June, with Moscow reluctant to agree to a deal it sees as unequal, the people said, asking not to be identified discussing confidential matters.

Russia has not yet supplied a detailed response to the American proposal, another person familiar with the discussions said.

The delicate nature of the discussions shows the level of mistrust that has only heightened since Russia’s invasion of Ukraine in February. The U.S. has strongly supported the government in Kyiv with weapons and financial aid, and President Joe Biden has called Russian President Vladimir Putin a “war criminal” and “murderous dictator.” Biden is under pressure at home to secure the release in particular of Griner, arrested in Russia on drug charges, but equally cannot be seen to be giving ground to Moscow.

Secretary of State Antony Blinken said last Wednesday the U.S. had made a “substantial” offer to Russia weeks ago, and on Friday he held a phone call with his counterpart Sergey Lavrov. The Russian foreign minister “strongly advised a return to professional dialogue in the context of ‘quiet diplomacy’ without any dubious media leaks,” the ministry in Moscow said in a statement afterward.

A person familiar with the matter said Blinken called Lavrov because Moscow had not accepted or even responded to the written proposal so far.

Griner’s case has attracted substantial publicity in the U.S., and if Biden can’t arrange a deal for her release, polls indicate he risks adding to Democrats’ troubles in the November midterm elections.

Moscow hopes to extract a better deal from the U.S. that involves at least one other Russian person, according to the people familiar with the discussions. Russia would agree to a one-for-one swap involving Griner and Bout or a two-for-two exchange, a person close to the Kremlin and a Russian official said. A two-for-one deal isn’t acceptable, they said. Russian Foreign Ministry spokeswoman Maria Zakharova declined to comment.

A person familiar with the matter said the focus in the U.S. was on getting a formal and detailed response to the offer already on the table, and less so about whether a 2-for-2 swap might be acceptable to the Biden administration.

The State Department did not immediately respond to a request for comment on Monday.

A Russian official via a back channel sought the inclusion in any deal of Vadim Krasikov, a former official with links to the domestic spy agency who was convicted of murder in 2021 in Germany, people familiar with the conversations said. Krasikov is imprisoned in Germany, meaning authorities in Berlin would need to agree to release him for a U.S.-Russia swap deal. The informal raising of Krasikov by Moscow could therefore be a stalling tactic.

“Holding two wrongfully detained Americans hostage for the release of a Russian assassin in a third country’s custody is not a serious counteroffer,” Adrienne Watson, a spokeswoman for the White House National Security Council, said in a statement. “It is a bad faith attempt to avoid the deal on the table that Russia should take.”

Wolfgang Buechner, a deputy German government spokesman, declined to comment Monday when asked at a regular news conference about potentially including Krasikov in any deal. “If I understand things correctly, this whole issue is in any case off the table so there’s no need to speculate” whether such a deal is possible, he said.

Another potential name in the mix for Russia could be Vladislav Klyushin, a Kremlin insider extradited from Switzerland to the U.S. in December on insider-trading charges, several people aware of the discussions in Moscow said.

Griner, 31, a two-time Olympic Gold medalist, has galvanized support for her release from a Russian prison. She has played for a Russian team during the WNBA offseason, and was was arrested in February after Russian customs officials said they found vape canisters containing cannabis oil in her luggage. Griner pleaded guilty to smuggling charges last month, saying the infraction was unintentional.

Still, it would be awkward for Biden to pursue a one-for-one swap for her, considering Whelan has been imprisoned far longer and his family has also agitated for his release. Whelan is accused of espionage.

An arms dealer dubbed the “Merchant of Death,” Bout is serving a 25-year sentence he received in 2012 for plotting to sell weapons to a Colombian paramilitary group that’s designated a terrorist organization. Moscow has long demanded his release. Bout pleaded not guilty.

“The Russian side was promptly ready to go for a one-on-one exchange scheme — Brittney Griner for Viktor Bout,” Melnikov said in a letter to Blinken that he submitted via the White House website on Friday. “But you announced an unequal two-on-one exchange, which, in my opinion, could clearly delay negotiations, or nullify all those huge efforts of prisoners’ relatives in both countries, lawyers and human rights defenders.”

The Biden administration has declined to comment on whether it would agree to release Bout as part of a swap for Griner and Whelan. The U.S. previously had spurned swaps including Bout, saying his crimes were too extensive, making an exchange unequal.

Still, Klyushin may be far more valuable to both the Biden administration and to the Kremlin. One of his alleged co-conspirators, who remains at large, was previously charged by the U.S. in connection with Russia’s scheme to interfere in the 2016 U.S. election.

Russian intelligence has concluded that Klyushin has access to documents related to the hacking of Democratic Party networks during the campaign, according to people in Moscow close to the Kremlin and government security services. The documents, the people said, establish that hacking was led by a team in Russia’s GRU military intelligence agency that U.S. cybersecurity companies have dubbed “Fancy Bear,” or APT28.

This isn’t the first episode where Klyushin’s name has come up. Russia a year ago turned down a proposed prisoner swap involving Whelan and another imprisoned former U.S. Marine, Trevor Reed, after Switzerland declined to hand Klyushin back to Russia, according to people with knowledge of the matter who spoke at the time.

In April, despite a rupture in ties with Russia following its invasion of Ukraine, U.S. and Russian authorities exchanged Reed for Konstantin Yaroshenko in a carefully orchestrated swap at a Turkish airfield. The Russian pilot was sentenced in 2011 to 20 years for conspiracy to smuggle cocaine into the U.S.