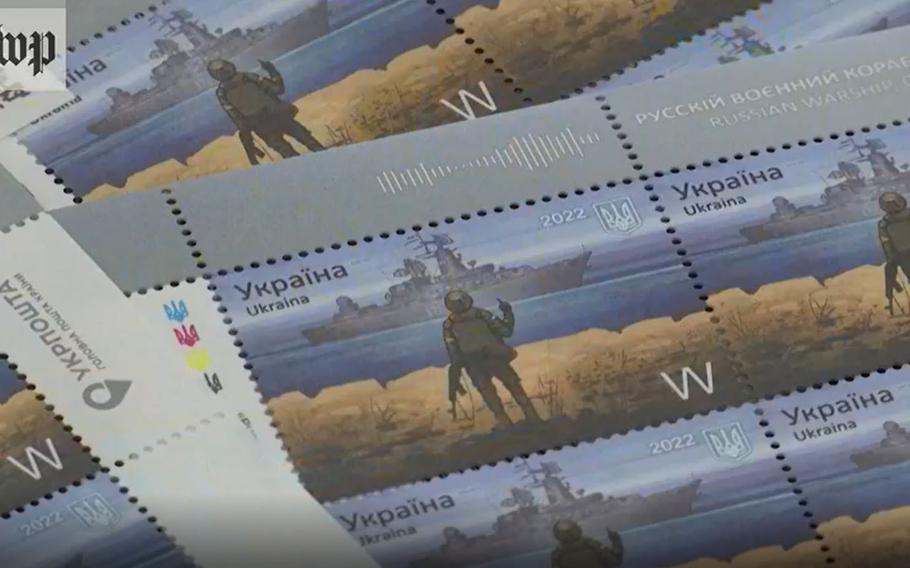 A video screen grab shows stamps depicting a Ukrainian border guard displaying his middle finger to a Russian warship. The latest set of stamps includes three of these same stamps — and three modified stamps showing the service member still standing, but not the ship. (The Washington Post)

Ukrainians lined up by the hundreds at post offices across the country on Monday after the postal service released stamps commemorating the sinking of a Russian warship in the Black Sea and a group of Ukrainian border guards who insulted Russian forces and were subsequently captured.

The stamps were first issued last month to honor the soldiers of Snake Island, who were hailed as heroes in Ukraine after they insulted Russian forces who were about to attack them in an exchange that went viral. Proceeds from sales of the stamp went to the Ukrainian war effort.

Now, the stamps have been reissued — with a twist. The previous set of six stamps featured a Ukrainian service member making a rude hand gesture at a Russian warship from the shore; the latest set of stamps includes three of those same stamps — and three modified stamps showing the service member still standing, but not the ship. The release of the altered stamp comes after Ukrainian forces, backed by U.S. intelligence, attacked the Moskva, the flagship of Russia's Black Sea fleet, which later sank, in a symbolic setback for the Russian invasion.

"Russian warship — done!" say the stamps, which are marked April 14, the date of the attack against the Moskva. The release of the new stamps was on the Day of the Marines of Ukraine, as well as 40 days since the Moskva sank.

"Things like this stamp are first and foremost symbols that help us believe in our victory. That we will definitely win this war, and the occupier will go to the bottom," Zelenskyy said in a statement. "People's interest in these stamps proves that. I am convinced that we will have many more such symbols of victory."

The proceeds from the sale of the latest round of stamps will go to a foundation focused on "helping doctors, the military and civilians," Ukrposhta, the national postal service, said in a Telegram post. The previous edition raised about $135,000 for Ukraine's army, Ukrposhta said.

Photos shared on social media show long lines of people waiting at post offices in cities such as Lviv and Odesa on Monday, after the stamps were released at 2 p.m. local time in 1,500 Ukrposhta branches across the country.

Given the excitement and commotion brought on by the first round of stamps, Igor Smelyansky, who heads the Ukrainian postal service, said 5 million stamps would be issued this time — and customers are limited in how many they can buy "without exceptions." He added that the stamps will also be sold internationally this time.

"We have done our best to account for the lessons from past sales so I wish everyone happy shopping!" Smelyansky wrote.